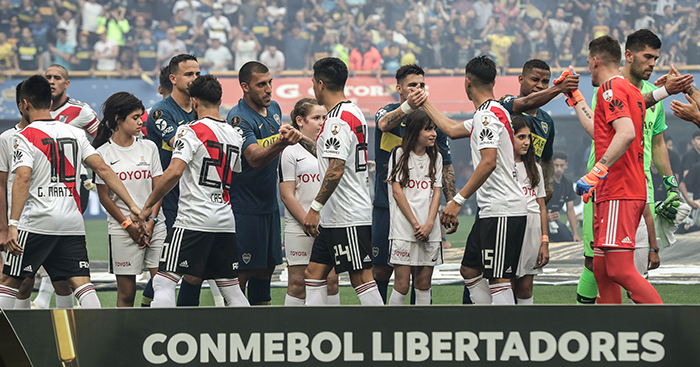 The Copa Libertadores final between Boca Juniors and River Plate, South America’s two biggest clubs, has been called a ‘hipster derby’. But just what is ‘hipster’ anyway?

It was inevitable that Neil Custis of The Sun would offer his two cents on the Copa Libertadores final.

A vocal critic of British fans watching non-British football, man-of-the-people Custis has gained a reputation for calling out pretentiousness within the game.

But while Custis is rarely wrong, he might be using the term ‘hipster’ too liberally here.

The Copa Libertadores is, after all, the South American equivalent of the Champions League. Boca Juniors and River Plate, fierce rivals, are two of the continent’s biggest clubs. They have never before faced each other at this stage of the competition.

Maybe this is genuinely a big deal?

Not everyone agrees with Custis’ use of ‘hipster’. Football365’s John Nicholson, who is maybe the antithesis of tabloid journalism, wrote an article over the summer that attempted to unpack the word’s usage in football.

He suggested that the likes of Custis are essentially anti-intellectual and anti-foreign, unloading their insecurities onto a murkily defined demographic in order to appear more legitimate.

“Maybe people who are in the mainstream have always disliked those who choose to walk a path less trodden, feeling they’re weirdos for not liking what everyone else likes,” Nicholson wrote.

And I would be 100 per cent convinced by this, if only the F365 t-shirt store, brainchild of Nicholson, didn’t have a category of ‘Hipster Vibe’ t-shirts, none of which are available in tie-dye.

It seems the football world has fully lost track of what the term means.

In order to clear up the confusion once and for all, here is a definitive football fan’s guide to what is ‘hipster’ and what is not.

There’s a general consensus that, among the lower-league London football clubs, Dulwich Hamlet F.C. is the hipster’s choice.

You can sort of see why: the club play in pink and blue, have a leftwing fanbase and sell craft beer on the sidelines. A hipster’s paradise, surely?

Unfortunately, Dulwich Hamlet is still a football club, which counts strongly against it in the hipster stakes.

20 minutes east of Champion Hill, however, is a youth-friendly pool club with karaoke and no windows.

No craft beer, no politics. Just 20-something Peckham kids playing the most subversive sport of all: pool.

But that’s not a hipster, that’s a fussy nerd.

Surprisingly, there has only been one true instance of football hipster facial hair, and that was — believe it or not — Michael Owen in the era of ‘Movember’.

Owen’s hipsterdom may have been temporary, but that brief flirtation spawned thousands of Tumblr pages dedicated to the former England goalscorer.

There have been knock-on effects, too: Spey whiskey has since become the new Red Stripe, while Camberwell art students have been heading to Chester en masse.

Both Buenos Aires clubs attract larger crowds than Dulwich Hamlet, but there are other reasons why this isn’t a hipster event.

Mostly because it’s a football match.

At the end of the day, Neil Custis seems to have forgotten that football is a sport predominantly enjoyed by working class people whose favourite album is (What’s the Story) Morning Glory?

A true football hipster would actually forego the Superclásico for the Buenos Aires Jazz Festival, taping the radio coverage of the match and listening to it later on cassette.

Okay, so the second-leg of the Copa Libertadores final might very well never happen, but at least Boca can take pride in a history of absolutely outstanding kits… https://t.co/XiEef4j2Fc

MUNDIAL magazine is stylish and great, but retro covers and oodles of blank space don’t make it hipster, per se.

You can actually identify football hipsters on the terraces quite easily: they’re the ones with a Pukka Pie in one hand and a copy of po-faced fashion and culture magazine Dazed in the other.

Why has Jameela Jamil called out Cardi B for promoting detox teas? We don’t know, but the football hipster does.

Writing for The Telegraph in 2016, Alistair Tweedale said Borussia Dortmund had become “the hipster’s choice” because “Dortmund’s fans are what so many others want their clubs to be”.

That doesn’t seem like a very thorough explanation, to be honest.

In actual fact, Germany’s football hipsters are more likely to be found in the cavernous Berghain nightclub in Berlin, rubbing shoulders with Shinji Kagawa and Marcel Schmelzer on the sweat-soaked floors of a former power plant.

Indulging in sincere nostalgia is a very un-hipster thing to do, which is why (What’s the Story) Morning Glory? is not, and never will be, a seminal hipster album.

Hipsterdom craves authenticity, and that’s why you’re more likely to find a football hipster spending upwards of £100 on the 2018-19 Burnley kit — shorts and socks included — than some colourful foreign jersey from the 90s.

Without sounding like an absolute football hipster, is Brazil's success down to gegenpressing? Nope. Definitely still sounded like a hipster

Ah, the three pillars of hipster life: ironic sailor tattoos, blue hair and chasing the opposition high up the pitch.

Somewhere in the mid-2010s, the word ‘Normcore’ entered popular culture. It was used to describe, in the words of Vogue, “bland anti-style” — the wearing of functional, featureless clothing as a rejection of established fashion ideals.

Normcore was a very hipster thing to do.