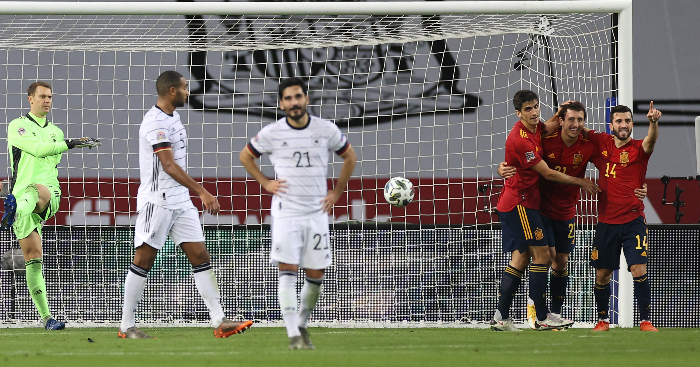 Germany suffered their worst defeat in almost a century in last night’s 6-0 thrashing by Spain, and the country’s press did not hold back in response.

Die Mannschaft went into last night’s Nations League match against Spain in good spirits. A point in Seville would have been enough to see them top their group and qualify for next year’s final four tournament. But that wasn’t to be.

They were completely overrun at the Estadio de La Cartuja, as Manchester City starlet Ferran Torres scored a hat-trick and Alvaro Morata, Rodri and second-half substitute Mikel Oyarzabal poured salt onto the wounds. We couldn’t resist taking a look at the reaction from the German press.

“Spain have embarrassed Germany here with a game that will either be the making of this team or the moment that Low’s failed attempt to redesign this team was laid bare.

“Six goals for Spain, and none for Germany despite having nearly their best team available. There will be a lot of questions.”

‘Barber in Seville’, ‘‘Did Kroos even play?’ and ‘0: 6 in Spain – DFB team is dismantled’ were among the headlines in Germany’s most-read outlet.

“The national team has lost many people and left them indifferent. Such an evening, such a debacle, such a footballing catastrophe, such a fiasco at least has an effect: we are talking about this team again. And about its trainer.

“There are four long months until the next international match. Something is going to happen. Something has to happen.”

“We should have talked more, especially after the first goal,” he said (via Der Spiegel).

“It is very important that you support each other and that you have a sense of togetherness. That wasn’t enough when it came to communication either.”

Germany are hit for six! 🏏

Mikel Oyarzabal comes off the bench to tap in Spain's sixth and inflict their joint-second heaviest defeat ever! pic.twitter.com/K9O6GtZqAg

“We have to digest that,” assessed the current DFB director.

“It will take a while. The team has fallen apart a bit, that shouldn’t happen. There’s no excuse for that, but that happens when a team can’t find a hold at all. The Spanish goalkeeper has not made a save in the entire game. We have to analyse it very hard.

“A lack of experience is not an excuse. We have to put an end to the many voting problems on the defensive. We know what quality our players are. The trust in Joachim Low is completely there, absolutely.”

“After the embarrassment in Spain, the DFB cannot continue to turn a blind eye to the truth. Joachim Low’s credit has finally been used up.”

Popular outlet Bild is asking the question – is it time for Joachim Low to be replaced by his former assistant, Bayern Munich coach Hansi Flick?

“What the German team offered six months before the start of the European Championship was the real news – almost nothing at all. Headless on the defensive, unimaginative forwards, never a minute on eye level with an opponent.”

“The staggering team of national coach Low didn’t have the slightest chance from the beginning and left the pitch very humiliated. The highest defeat since 1931 (0: 6 against Austria) followed Low in shock and petrified on the sidelines.”

Was there enough in Spain’s performance to suggest they’re the team to back at Euro 2020? Or does the potential of Low losing his job and the likes of Thomas Muller and Jerome Boateng returning to the fold tempt you to bet on Germany as dark horses?