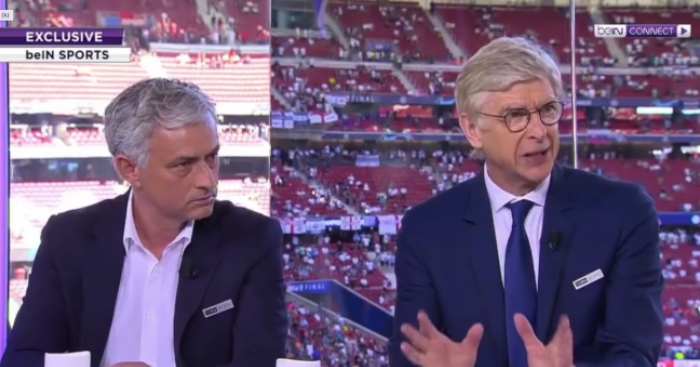 When Arsène Wenger and José Mourinho were reunited in the beIN Sports studio for the Champions League final, we weren’t sure what to expect.

The pair have had their run-ins in the past, not least when Mourinho, at Chelsea at the time, accused then-Arsenal boss Wenger of being a “voyeur” and later dubbed the Frenchman a “specialist in failure”.

With that in mind, there was plenty to look forward to – or at least look out for – when the pair were reunited ahead of the biggest game of the 2018-19 season. We’ve included the full video at the end, but we’ve also timestamped some of the juiciest bits.

“It is important that we are optimistic, and when you reach a Champions League final you don’t have reasons not to be optimistic because if you arrive there it’s because you did something great to be there,” Mourinho began, with a smile and a lick of the lips.

The Portuguese, of course, made two Champions League finals to Wenger’s one during their respective times at the top, winning both of his while Wenger’s Arsenal fell short against Frank Rijkaard’s Barcelona in 2006.

Was it a swipe at his long-time rival? If it was, it’s worth noting that while neither was able to get beyond the last 16 of the Champions League in the last two seasons, Mourinho was the only one of the two managers to actually take charge of a game in the competition.

“I believe, as José said, that you have to adjust to the psychological problem of the team, but as well you have not to show your pressure and… not make any big mistakes in the preparation,” Wenger says.

“When we speak about [whether] Kane is fit or not fit, you know that’s where you have to analyse well. The players even put the physios under pressure – you don’t know who you can trust any more. For a final, everybody is fit and everybody feels well, so you have to make the right decisions and get the best players on the pitch and keep it as simple as possible.

Mourinho seems deep in thought while listening to his colleague, perhaps casting his mind back to those occasions where managers themselves drop red herrings about players’ fitness in the lead-up to a game. Indeed, just a few days prior, the build-up to Chelsea’s meeting with Arsenal in the Europa League final was dominated by questions over N’Golo Kanté’s fitness.

Of course, Kanté played and contributed to a victory, while Kane had a quiet evening in defeat. Had the England striker put undue pressure on Tottenham’s medical team?

You can see Mourinho smiling and nodding as Wenger says “you face, as well, the problem of the fear, the fear to fail”.

During his entire managerial career, the Portuguese has been able to manipulate opponents with mind games, tempting opponents to second-guess themselves and crumble under pressure.

We saw it with Monaco’s blunt performance against Mourinho’s Porto in the 2004 final, of course, but there were plenty of occasions in the league which match this description. Mourinho’s knowing nod and smile might well be him thinking back to those times when Wenger’s Arsenal were unable to combat the fear.

However, as Wenger continues, he hints at methods of arm-round-the-shoulder mental coaching which seemed to abandon Mourinho (or which seemed to be abandoned by him) at Manchester United. Is there an element of silent introspection here, perhaps?

“I think it’s not fair to say one of them failed,” Mourinho says, gesturing towards the two squads warming up on the Wanda Metropolitano pitch.

“It’s not fair, but it is the reality of football… but I think we are here to protect the loser, because the loser doesn’t deserve to be called a loser tonight.”

So, about those old “specialist in failure” comments, José? No wonder we can hear laughter in the background.

Mourinho and Wenger explain what it's like preparing a team for a UCL final.

When discussing Spurs’ potential tactical set-up, the two managers build on each other’s points in a way which seems supportive, but Mourinho’s past means we never know whether he views it as a game of Tetris or one of Jenga.

While this makes for a great, flowing conversation which offers real insight – and shows us both managers have done their research even when not required to prepare teams for matches with Liverpool and Tottenham in 2019 – it’s hard to look beyond the history between the pair. How can we watch such camaraderie without Mourinho’s Machiavellian instincts playing on our minds?

After all, if he’s wrong with his additions, he can always fall back on the fact that he was just supporting Wenger’s points.

“I have to confess, many times I [presented the formation] wrong for the UEFA sheet,” Mourinho admits when thinking aloud about the formations in Madrid.

“Sometimes you don’t give exactly the real positions of your players, so we don’t know,” he adds, his head dipping like a schoolkid who has just been caught in a lie.

Sure, ‘managers lie’ isn’t exactly the biggest or most dramatic revelation, but Mourinho’s willingness to make the admission, to lower his guard, points to how comfortable he is just a few months on from the closed-off dénoument to his Manchester United tenure.

"Are they coming with these scheme that the UEFA teamsheet presents? I have to confess, many times I did it wrong for the UEFA sheet. Sometimes you don't give exactly the real positions of your players!"

“I think a team needs to buy players when the players they have are not good enough,” Mourinho says, in reference to Tottenham’s transfer activity (or lack thereof).

“When the players are good enough, the best you can do is not to sell them, not to lose them. So I think the best business Tottenham did in the last couple of years is to have offers for Kane, for Eriksen, for Dele Alli, for Vertonghen, for all of them, and not to sell anyone.”

“I think the two full-backs are phenomenal in their intention of attacking, their aggressivity when their team has the ball,” Mourinho says during the half-time break, having already praised Trent Alexander-Arnold and Andy Robertson before the game.

Wenger seems deep in thought as this is going on, perhaps lamenting the fact that it has been a while since he had such balance and talent at his disposal.

Or perhaps he was just trying to remember the names of his full-backs over the last few years. That name you’re looking for is Carl Jenkinson, Mr Wenger.

“At the end of the day, the game was decided on two set pieces,” Wenger says after the final whistle, adding: “I personally believe it was a very average Liverpool”.

“[Tottenham] lacked a little bit of killer instinct… I felt they believed without really 100 per cent believing.”

Mourinho agrees, granting his neighbour the reverence of being referred to as “Mr Wenger” rather than “Arsène”. Is he hoping to be granted a “Mr Mourinho” later on? If so, he’s out of luck.

Mourinho and Wenger analyzing football next to each other, who says world peace is impossible

Mourinho speaks of Liverpool’s midfielders ensuring they joined their defenders in “a block of seven” and praises them for being “very pragmatic”.

“They were very solid defensively, and when Tottenham managed to do something and to create something, the player they missed last season [Alisson] was there today.”

Having famously neutralised a free-flowing Liverpool in 2014 with a “pragmatic” midfield, and having failed to do the same in his final game this season, might there be a touch of jealousy in his words?

“I think if this match is not the Champions League final, if it is a Premier League match, if it is the final of the League Cup, we would all say the game is not good,” Mourinho asserts during his post-match analysis.

Wenger, meanwhile, doesn’t know where to look. First he glances downward, before turning his head towards the pitch and eventually sipping from his drink while avoiding eye-contact with Mourinho.

We can only assume the Frenchman was casting his mind back to another Champions League final in which a team won with less than 40% possession thanks to one unanswered goal in each half. Let’s not dwell on who the Inter manager was for that victory over Bayern Munich in 2010.

“Both managers did extremely well. The only difference, I must say, if you look at the history, if you lose a game like Tottenham did today, they have less chances to come back to a final than Liverpool has,” Wenger says as the segment draws to a close.

“Tottenham made a miracle to get there, so when you are in their position and you think ‘we should have won this game’, to come back here is a mountain to climb. That makes the pain even worse, because you feel it’s a unique achievement to get there, but to come back…”

It might not have been meant as a needle, but we’re sure plenty of Arsenal fans will be pleased to see their former manager make Spurs’ heartbroken fans feel even worse.