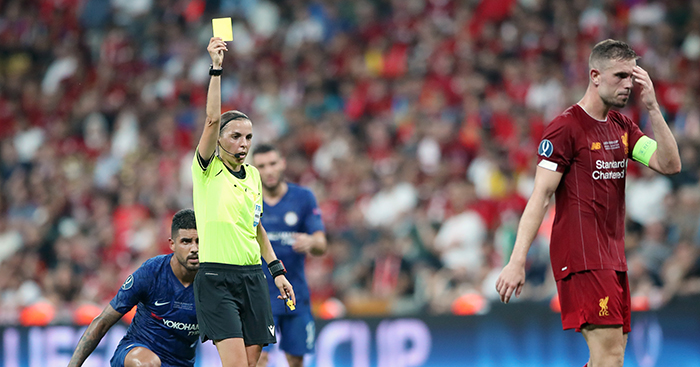 Stéphanie Frappart became the first woman to referee a major European game when she took charge of the UEFA Super Cup final between Liverpool and Chelsea – and Jurgen Klopp was impressed.

Frappart, who took charge of two games in France’s Ligue 1 last season, awarded Chelsea a controversial penalty in extra-time, but Klopp had nothing but praise for her after the game, which Liverpool eventually won in a shootout.

“I told them (his players) after the match that if we had played as they officiated, we would have won 6-0,” Klopp said. “There was so much pressure for this historic moment…I could not have more respect for Stéphanie Frappart.”

Mark Clattenburg and Mark Halsey disagreed over her awarding of the Chelsea penalty, with Halsey labelling it the correct decision but Clattenburg claiming it should have been a goal kick. However, Clattenburg did say it was obvious to see why Frappart had pointed to the spot given her angle. Indeed, the question is not whether Frappart made a mistake but why VAR was not used.

Here’s how she handled that and the other big moments on the night.

If a footballer is keen to get a low-pressure touch in early to settle the nerves, Frappart must have been pleased to get an easy decision to make within the first minute, when Olivier Giroud leant into Virgil van Dijk to stop him competing for an aerial ball.

He half-heartedly protested his innocence and immediately set the tone for the night: the idea that the players might behave differently towards a female referee was quickly put to bed.

Cesar Azpilicueta, as he so often does, was attempting to influence decisions throughout, starting in the fourth minute, when Frappart penalised Van Dijk for a handball but quickly turned her back on the Chelsea defender as he called for a booking.

And, as well as her approach to dissent, that was another theme of Frappart’s performance: she did not show her first yellow card until the 79th minute, when Azpilicueta shoved Sadio Mané in the back and then – of course – argued the toss.

Indeed, Halsey believed the booking was actually for dissent rather than the foul itself. The players “generally behaved”, as the former referee put it, but Frappart certainly didn’t struggle to impose her authority when she needed to.

There was an incident, some moments ago, that I feel some picture eds will love to use tomorrow.
Yes, Cesar Azpilicueta did shout in the face of referee Stephanie Frappart.
Just as he does to every other ref he comes up against as Chelsea captain.
As you were.

Frappart had her first big call to make inside five minutes, when Mané’s overhead kick struck Andreas Christensen’s arm inside the penalty area.

The Senegal forward and Mohamed Salah both immediately threw their arms up into the air – possibly more out of hope than expectation – but Frappart never looked like a woman wanting to make herself the story of the game.

She didn’t seem to give this one a second’s thought – the ball was hit at Christensen from virtually point-blank range, and Halsey argued the defender’s arms did not extend beyond his ‘natural silhouette’ as per the new laws.

Frappart went into the game as a reputation for being card-happy, but on this occasion she showed only three in 120 minutes, with Halsey praising her for “letting the game flow” and “playing some good advantages”.

It had been suggested that players might attempt to stay on their feet more and feign injury less in some sort of show of machismo. Whether there really was an element of that or if it was mainly down Frappart’s unfussiness on the night, the end result was only 22 fouls.

To put that into perspective, there were 28 given in Chelsea’s 4-0 defeat to Manchester United at the weekend – and in 30 fewer minutes.

Both Halsey and Clattenburg praised Frappart’s positioning and keeping up with the play. Indeed, Clattenburg said how she “adapted to the pace and physicality of what was essentially a Premier League game” was what impressed him most about her performance.

Had it not been the first time a woman had refereed a major men’s final, “no one would have noticed”, Clattenburg said.

And though Clattenburg and most others were of the opinion that Chelsea should never have been given a penalty, he had no complaints regarding Frappart’s position 20 yards from goal when awarding it.

Halsey says he expects UEFA to consider appointing Frappart for Champions League matches after handing her the Super Cup, and it seems unlikely anyone would have any complaints based on her performance on the major stage for the first time.

“I think she’s had a great game – she’s been brilliant in what’s been a difficult game,” former England and Chelsea midfielder Joe Cole told BT Sport.

“She’s been excellent and let the game flow and got most of the big decisions right. She’s handled it fantastically well.”

Glenn Hoddle added: “It’s gone to extra time for her as well. The pace will be quicker in the men’s game, but she’s kept up and done an excellent job.”

Urs Meier: I can’t believe anyone thinks Sol Campbell goal should have stood

Can you name all 47 Englishmen to have scored 50+ Premier League goals?