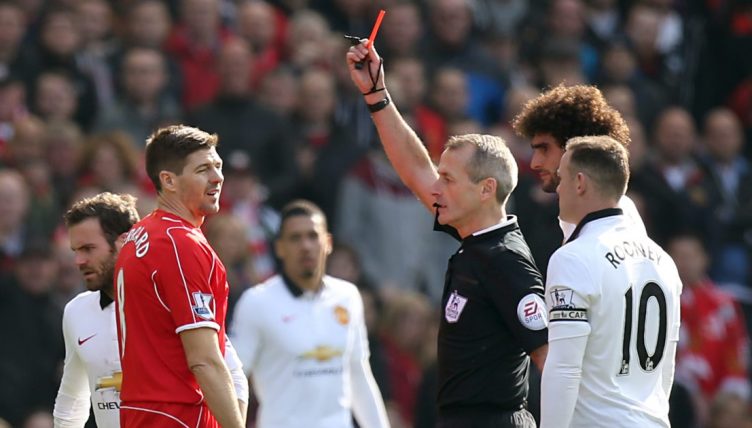 Steven Gerrard’s status as a Liverpool legend is cemented in history – but it’s fair to say his Anfield exit was a nightmare rather than a fairytale.

In January 2015, Liverpool announced Gerrard would leave upon the expiry of his contract at the end of the season, despite having offered the midfielder a new deal.

The Reds had come so close to winning the title the previous season, but Brendan Rodgers had begun to limit Gerrard’s playing time and so he decided to move on.

It was a sad farewell for the former England captain, who was left on the bench for the entirety of a Champions League tie at Real Madrid, lost in the semi-finals of the League and FA Cups, and was beaten 6-1 at Stoke City in his final appearance for the club.

Another flashpoint came in March when Gerrard was sent off just 38 seconds after coming on as a substitute in his last clash against fierce rivals Manchester United.

In the eyes of some, Gerrard let Liverpool down that day after letting his emotions get the better of him. For us, it was one of the highlights of his career. In fact, it was f*cking brilliant.

There was plenty of hope among Liverpool fans after the club finished second in 2013-14, only for Rodgers’ men to make a slow start to the following campaign to leave themselves playing catch up on Manchester United in the hope of securing a top-four spot.

After losing seven of their opening 16 Premier League fixtures, the Reds went on a 13-match unbeaten run, dropping points just three times prior to the visit of Louis van Gaal’s men – a sequence of results which had cut the gap to just three points.

By this point, Rodgers’ use of Gerrard was under plenty of scrutiny, and the Kop hero was forced to watch on from the bench as United dominated Liverpool’s midfield in the first half. As Rodgers later told BBC Sport: “Steven probably watched the first half and saw us not make a tackle.”

Juan Mata put the Red Devils ahead when Ander Herrera was given all the time and space in the world to pick out the Spaniard, who – shock horror – was able to take advantage of an out-of-position Alberto Moreno.

Liverpool were lucky to get in at half-time with the score just 0-1. Cue Gerrard’s introduction…

Right then, here we go.

Adam Lallana, who wasted Liverpool’s best/only chance of the first half, off. Gerrard, on.

As he struts onto the field, the 34-year-old is biting his lip in impatience to get the game restarted.

Jordan Henderson has a brief word in his team-mate’s ear, but Gerrard clearly isn’t listening to a word he’s saying. No nod. No, ‘Yeah, sure mate.’ Not even a look.

The second half has just kicked off and Gerrard is already flying in. Mata has quickly realised it’s wise to bottle out of the challenge, but Gerrard kicks him up in the air anyway.

It seems harsh that Mata has to be counted among the victims. The fact he scored the opening goal aside, there’s no need to boot the Spaniard into next week really. Even amid such a fevered rivalry, Mata is too nice to become embroiled in the hatred.

Still, it has taken less than 30 seconds for Gerrard to show more fight than any Liverpool player displayed in the first 45 minutes.

It’s quite endearing the way Gerrard quickly rises to his feet and chases immediately after the next ball like a child in a playground.

Fuelled by pure adrenaline and 45 minutes of frustration, he has no interest in the wider game around him, he just needs to be in the thick of the action.

Ander Herrera is no midfield enforcer, but he excels in the role of snidey shithouse.

A short pass to Gerrard is enough to entice the Spaniard to slide in on his opposite number, but the Liverpool man knicks the ball away to a team-mate.

At first it’s unclear what’s happened. There’s obviously some sort of collision. Herrera writhes around in pain. Gerrard raises his hand half in apology, half in dismissal of the United man’s antics.

Wayne Rooney can’t quite bring himself to fully get in Martin Atikinson’s face and demand his England team-mate is sent off – a Cristiano Ronaldo wink would’ve been hilarious, tbf – but he still lets the referee know what he expects. And there it is.

Gerrard feigns an impressive ‘what me, sir?’ gesture but hardly protests the decision. He knows.

Yeah, he knows. And now, thanks to the replay, we all know.

Maybe the heat of the moment got to Gerrard, maybe he was just angry that Herrera has copied his boots.

He might have stood more of a chance of getting away with it had he caught Herrera with the right foot with which he passed the ball. Jumping up to stamp on him with his left probably wasn’t the best idea.

Liverpool, desperate to keep their hopes of qualifying for the Champions League alive, actually respond positively to the setback, finally putting United on the back foot.

But on the hour mark, Mata, fully recovered from Gerrard’s initial challenge, delivers the killer blow with a composure and poise which could not be further from the frenzy of the occasion.

We told you Mata never deserves to be kicked. Forget raw passion, he deals only in beauty.

With 20 minutes to go, Daniel Sturridge pulls a goal back, but United can afford to see Rooney miss a stoppage-time penalty as they secure all three points and eventually finish fourth.

Liverpool, meanwhile, capitulate under Rodgers, dropping down to sixth.

Gerrard explained his 38 seconds of madness while defending two Rangers’ players, Alfredo Morelos and Jon Flanagan, who had been sent off in a Europa League tie in 2018.

“The Man United one is unexplainable. I was only on for about 43 seconds,” Gerrard said. “But I think that sending off had been coming since the Thursday, to be honest! Ever since I found out I wasn’t going to start.

“I was a player who played on emotion and that’s where I felt my best performances – all the performances people speak about – came from. But sometimes I got the balance wrong.

“I’m human, my players are human and they’ll get it wrong sometimes. I can accept that.”