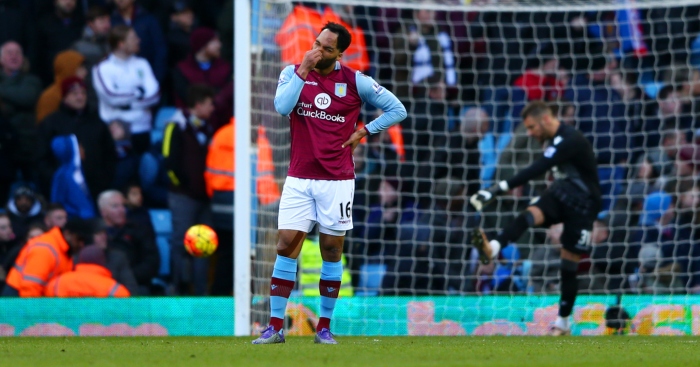 It’s February 2016. Your club, Aston Villa, are rock bottom of the Premier League. You have just lost 6-0 at home to Liverpool, conceding goals to Divock Origi, Nathaniel Clyne and Kolo Touré.

The Daily Mail awards you, Joleon Lescott, a rating of 4/10, calling you a “shadow of [your] former self”.

It has not, all things told, been a good day at the office.

So what do you do now? How do you react to the crushing defeat that has left you eight points from safety? How do you mend the fractured relationship with an increasingly furious fanbase — a fanbase that has just witnessed its biggest home defeat for 81 years?

How do you, an experienced England international, lift the spirits of a club that seems all but condemned to life in the Championship?

Do you a) go home, get some rest and start thinking about the next match, b) have a word with Jores Okore about shoring up the defence, c) offer a sincere apology to the fans or d) tweet a photo of a really fucking expensive car?

Cynics among those followers deduced that the image was a not-so-subtle attack on Villa supporters, who had given the player little encouragement over the 90 minutes at Villa Park.

The tweet, as they interpreted it, was not just a picture of a car but a gesture of defiance, a pigheaded assertion of financial superiority, a middle finger to the common man. I don’t need your support, the photo said, because I have my grey Coupe.

Not so, claimed Lescott:

“The tweet sent out from my account involving a picture of a car was totally accidental, it happened whilst driving and my phone was in my pocket.”

Lescott would later elaborate, explaining that an Aston Villa youth player had sent him the photo.

“That picture is from a young player at Aston Villa. He asked me, should he be getting this car as his first car? It was one of them things.”

Even with the additional information, few believed Lescott’s excuses.

And yet, even if you don’t believe Lescott, the whole spectacle produced an even greater villain than the Villa defender: the British football media.

Because as the storm began to rain down on Lescott and his car tweet, nobody appeared to be asking the most important question: did Lescott even own a Mercedes-AMG S 63 Coupe?

Taking a quick peek at the Villa car park might have settled the debate. Mercedes? Lescott was probably being an arse. No Mercedes? Probably telling the truth.

Reporters all went with the ‘Lescott tweets picture of expensive car’ line, before sharing some provocative Twitter responses, most of which showed photos of less expensive vehicles with captions like ‘ha you’re more like this one pal’.

@JoleonLescott Joleon this is a better representation of you pic.twitter.com/p5ieVSrdU7

Even local news like the Birmingham Mail copped it, quoting Lescott’s apology and little else.

Why? This can’t be stressed enough: whether Lescott owned that car makes all the difference.

Tweeting a picture of something you don’t own can’t be construed as a demonstration of wealth, even if you have the resources to own it. Really, it just can’t.

People don’t Instagram pictures of brunches they could be eating while they eat something completely different. It’s confusing. It’s opaque. It’s senseless.

Now, without seeming like a hypocrite, I obviously can’t find out whether Lescott was driving a Mercedes-AMG S 63 Coupe in February 2016. I can’t time-travel. I can’t, without a great deal of effort, even get to the Midlands.

After some searching, however, I can give you two clues — nothing conclusive, but shreds of evidence heretofore ignored by the press.

On a Villa message board from April 2016, one fan writes: “Prick Lescott drives a matt silver S600 AMG Coupe, Aim those tomatoes straight and true.”

This is, admittedly, not a rock-solid source. It’s written two months after the Twitter scandal, so the message board user might have just assumed what many assumed: that Lescott wouldn’t tweet a picture of a car unless he owned it.

Still, the user is presumably a Birmingham resident. It counts as evidence.

Secondly, and this is literally the only other relevant result about cars owned by Joleon Lescott, a Huddersfield-based window tinting company called Go-Tints has posted pictures of its work on a Rolls-Royce Wraith, apparently owned by Lescott circa September 2015.

“We recently had the pleasure of tinting the windows for Aston Villa and England ace, Joleon Prescott’s Rolls-Royce Wraith,” the company says.

Again, there are problems here.

Joleon Prescott — likely a conflation of Joleon Lescott and former Deputy Prime Minister John Prescott — is, as far as I know, not a real person. Furthermore, the sentence states that the car itself is the football star, not the owner.

Still, this too must count as evidence, albeit evidence that contradicts the other evidence.

Lescott, creator of the most sensational football tweet of all time, remains innocent until proven guilty.