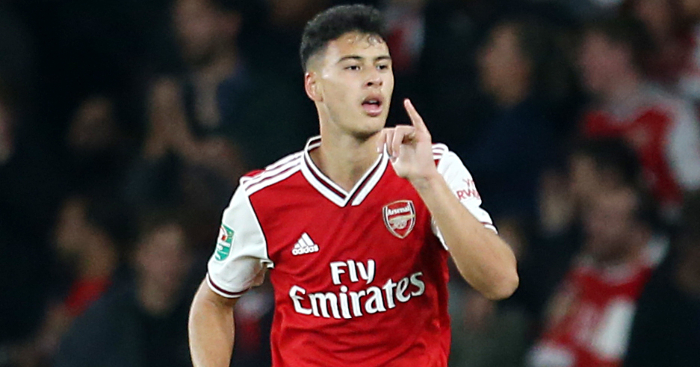 Unai Emery’s blessed when it comes to forwards at Arsenal, with record signing Nicolas Pepe joining Alexandre Lacazette and Pierre-Emerick Aubameyang this summer, but a much cheaper buy is making waves – his name is Gabriel Martinelli.

Further down the pecking order, homegrown winger Bukayo Saka is emerging as a real talent, while Eddie Nketiah’s had to go out on loan, and he’s in prolific form for England’s Under-21s and Leeds United.

Given that wealth of attacking talent, some might have thought it unnecessary to bring in Martinelli. But the young Brazilian has been brilliant when given opportunities, and he’s arguably the best prospect at the club. Here’s everything you need to know about him.

According to those that know him best, Martinelli has had his sights set on the big-time for a long while, training with single-minded dedication, even using a nutritionist since his mid-teens.

Like Rivelino, Cafu and Neymar before him, he hails from Sao Paolo. He turned down more lucrative offers to play for local team Ituano FC, rather than inner-city giants Corinthians, and soon began to impress at every youth level, before becoming their youngest debutant in a century at the age of just 16.

Trials soon followed at FC Barcelona and Manchester United, as it soon became clear his small regional football club wouldn’t be able to keep hold of him for long.

He appeared as a substitute for United in a youth fixture against Lincoln City in July 2017, a game in which Millen Baars and breakout star Brandon Williams scored to give them a 2-0 win, but a permanent deal never materialised.

Subsequently knuckling down back in Brazil, he’s since signed for the Gunners for a reported fee of £6m, having just turned 18 in the summer of 2019.

He’s yet to pick up an international cap, but he holds an Italian passport, and Italy are said to be monitoring his progress.

Gabriel Martinelli once had a trial at Man. United. " 2015- 2017, I went to train there 4 times for around 15 days. I asked to take pictures for Evra, Fellaini and others. Pogba knew I was Brazilian and asked if everything was OK and where I played. We took a picture together." pic.twitter.com/c6Ou94RPvb

Martinelli hit the ground running for Arsenal, shining in pre-season as Emery gave regular opportunities to him and Nketiah.

He scored on his debut against Colorado Rapids, a wonderful improvised chested finish, and was unlucky to see a goal disallowed for a marginal offside call against Lyon, before making further appearances against Angers, Barcelona and Fiorentina – where he nearly scored after a filthy nutmeg.

Since the season got underway, he’s come off the bench to make some late cameos in the Premier League, and has been ridiculously prolific in his cup opportunities.

He scored a brilliant brace on his first competitive start for the Gunners, a 5-0 win over Nottingham Forest in the League Cup, and repeated the trick a week later with two more as Arsenal beat Standard Liege 4-0 in the Europa League.

While Arsenal put in an off-colour display against Vitoria de Guimaraes, needing Nicolas Pepe to bail them out off the bench to make it 3-2, he continued his 100% of scoring when starting with a first-half equaliser.

A night that Gabriel Martinelli will never forget ❤️

Watch out for the Kieran Tierney assist 🎯 pic.twitter.com/EOaHFPt5FC

Robin Van Persie is a striker who knows a thing or two about scoring goals for Arsenal, and he’s a big fan.

“He knows where the danger is, where the space is,” said the Dutchman, speaking on BT Sport after Martinelli scored against Guimaraes.

“He scored a great goal. What I like about him is his link-up play, he looks lively, he looks technical, he looks very good to me, it’s a joy watching him. Five in five is a great start.”

His manager Emery also gave some hints about how he sees the 18-year-old’s best position going forward, and how he’s rated his time in North London so far, after his performance against Nottingham Forest.

“I spoke with him about being calm, because when his opportunity arrives like tonight,” he said.

“If he continues training and being hungry, I think he’s going to do well and tonight confirmed that. He played in pre-season with us and in every training he showed he was hungry to be with us and to have that opportunity to show his capacity.

“In pre-season he played in different positions, above all he preferred to play as a left-winger but he can also play as a right-winger.

“I’m using him as a striker because he played there in Brazil. It’s not the best position for him but the first thing in his mind is to help us. He wants to achieve some minutes in the team. I think tonight his performance and attitude was amazing.”