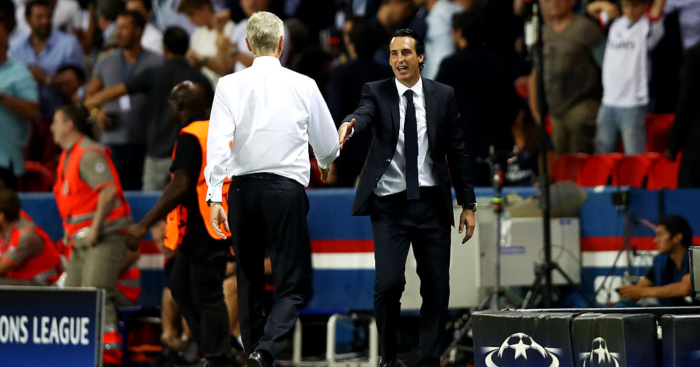 Arsenal have seemingly been rejuvenated under Unai Emery – but how do his results match up to those of Arsene Wenger?

The last few years of Wenger’s reign caused plenty of tension at Arsenal with an increasingly vocal section of the support unhappy about the direction of the club under the Frenchman.

Wenger stepped aside at the end of 2017-18, and the Gunners have caught the eye at the start of the season under Emery, but how does their record after eight Premier League fixtures compare to recent campaigns?

Arsenal lost their opening two games – 2-0 to Manchester City and 3-2 to Chelsea – but they’ve dusted themselves down and picked themselves up, going on a nine-game unbeaten run in all competitions.

Their sixth straight win in the league, a 5-1 demolishing of Fulham, included a well-worked Goal of the Season contender from Aaron Ramsey.

Arsenal’s opening game of the Premier League season, a 4-3 win against Leicester City, was great for the neutral, but the side’s defensive frailties were there for all to see.

A loss Watford didn’t help morale, while a 4-0 loss to Liverpool really highlighted the gulf in talent between the two sides at the time.

After a loss to Liverpool on the opening day of the season – in another a 4-3 thriller – the side knuckled down and went on a decent run.

Following a 0-0 draw against Leicester, who were reigning Premier League champions, Arsenal embarked on a six-game winning run, including an impressive 3-0 win over Chelsea and were level on points with leaders Manchester City after eight matches.

Arsenal got off to a stuttering start to but ended up with in second with five wins after eight matches.

They drew to Liverpool and were beaten by Chelsea – featuring a typically Diego Costa-inspired red card to Gabriel Paulista – but a 3-0 win over Manchester United eased supporters’ concerns.

Well, a single loss in eight league matches sounds quite good. It could even be title-challenging form. But your perception will change when you learn that five of the other eight matches ended in draws.

The Gunners met Chelsea once again in the early stages of the season, and once again they came away with no points, losing 2-0 to the Blues.

Arsenal’s campaign began with a disappointing 3-1 home defeat to Aston Villa as Laurent Koscielny was sent off for two bookable offences within six minutes of each other.

However, supporters would soon forget that defeat as Wenger’s men sat top of the table after eight games thanks to a six-game winning streak which featured a victory over north London rivals Tottenham.