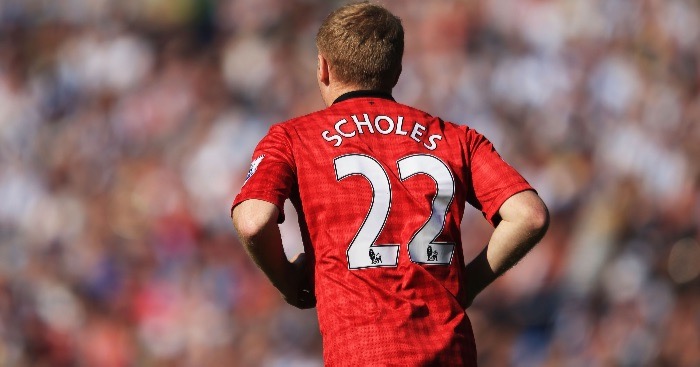 Paul Scholes was renowned as a man who barely spoke to the media during his player career at Manchester United, but he certainly isn’t shy of sharing his opinions now.

It’s been five years since Scholes hung up his boots, but he’s still emotionally invested in the side he played 20 years for, as is clear from his comments as a pundit in recent years.

Here’s a round-up of Scholes’ most spectacularly arsey quotes about United, England, and football in general.

Before United’s match against Newcastle in 2014, Scholes voiced his concern about Louis van Gaal giving players Christmas Day off. What a Grinch.

Paul Scholes questions LvG's decision to give his players Christmas Day off. #MUNNEWhttps://t.co/QPROgwBFCp

The Dutch manager thought it would be a good idea to rest Rashford in a critical game against Norwich City three games from the end of the 2015-2016 season.

United won 1-0, but Scholes was not impressed by Van Gaal’s selection.

“What are you saving Rashford for?” Scholes said on BT Sport. “It’s not like you’re saving yourself for anything. You’ve got three games of your season.

“Maybe it’s just that he’s not interested in scoring goals.”

Van Gaal offered his response below.

No Rashford or Blind, Van Gaal explains why. #NORMUN https://t.co/I2rhyHuoK8

Marcus Rashford gave supporters reason to celebrate with two goals on his Premier League debut in a 3-2 win over Arsenal in 2016, but Scholes wasn’t taken in by the positivity, however, saying that the Red Devils’ – and Arsenal’s – expectation had dropped severely.

“That can’t be Man United.”

Scholes trashing Utd and Arsenal without pausing to take a breath. @btsportfootball pic.twitter.com/x4vt0y5giB

Before United’s Champions League match against Benfica in 2017, Scholes claimed Jose Mourinho was doing the best with what he had, suggesting the squad was not up to United’s standard.

“After four years there’s a point where philosophy has got to go out the window.”

"We know we'd all like to see attacking football. I don't think this Man Utd team is capable of that."

Are you not entertained, Scholes?

Scholes reminded us that football is not just a results game. It should be played in an entertaining way, too.

“You have to entertain fans as well.”

😤 Players can't enjoy it
🙅‍♂️ No partnerships
🙃 All over the place

As is clear from this extract from his co-authored book ‘Journey Back to the Heart of the Game’, Scholes finds the Premier League quite dull.

“The best players are in Spain or at Bayern Munich and Juventus. We’re linked with big players – Gareth Bale is a top player – but we don’t get them now. Not any more. You never see a Lionel Messi coming over here, you never see a Neymar in the Premier League.

Scholes feels the Premier League is behind the other top European leagues in terms of talent and spectacle.

“Germany has better teams. In Italy probably the strength in depth isn’t great. They talk about Italy being a bad league, but I don’t think English people look at it. They say it’s boring. No chance,” he told The Guardian.

“The Juventus team would beat any team in this league. They came up to Manchester City and beat them easy. But we have this interpretation of the Italian league that it’s rubbish, that they only try to defend. No chance.”

The France international won the World Cup this summer, and while at Juventus, he was integral to the side. He won the league title in each of the four years he was there.

Things are different at United. Here, Scholes has a groan, asking where Pogba’s form has gone, after United’s 0-0 draw at home to Southampton in the Premier League in 2017,

“Where’s the Paul Pogba from Juventus?”

Mourinho has gone from relative saviour to polarising figure at United. Scholes has chosen his side and made his feelings known on the Portuguese boss.

“Every year that Manchester United don’t win something it’s a disaster.”

"If Guardiola was manager of @ManUtd he'd hate what he was seeing."

Scholes isn’t convinced by United’s European chances this season. He’s probably not the only one.

“Do you see a team that’s improving?”

It’s gone from bad to worse for Mourinho at Man United and Scholes feels the manager’s time at Old Trafford should be up now.

"I'm surprised that he survived after Saturday"

"I think he's embarrassing the club."

Nine players who came out of retirement: Scholes, Lehmann, Cruyff…