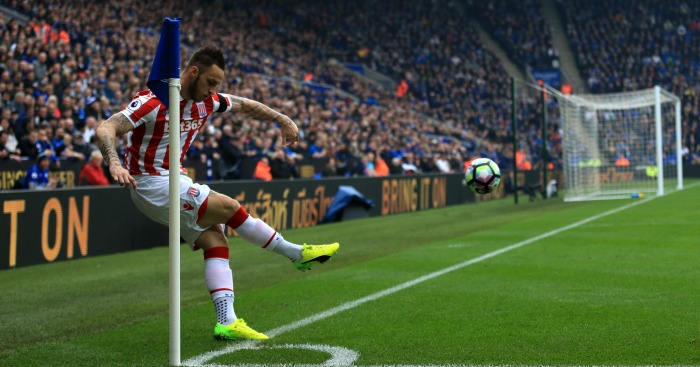 Few things prompt the desperate frenzy of excitement when your team is a goal down quite like winning a corner.

Upon the sight of the linesman pointing his flag towards the corner, it’s impossible not to get caught up in the sense that you’re definitely about to grab the goal which gets you back in the game.

The clock is ticking down, the supporters rise to their feet, the big lads at the back gallop forward and surely – surely?! – this is the moment you’ve been waiting for?

Don’t even get us started on when the goalkeeper gets the thumbs up from the sidelines to clumsily sprint into the opposition area and generally run about, bumping into bemused team-mates with the same ‘wtf’ expression of a toddler trying to crack the enigma code – football does not get any more exciting.

Sadly, we all know what generally happens at this point: the cross gets headed away; or the goalkeeper comes out to catch it; or it sails over everyone’s heads and out for a goal kick; or you inexplicably take a short one, then realise you don’t know what to do, so it gets passed all the way back into your half, only to be lumped back into the area and sail straight out for a goal kick.

And Reddit user Hesussavas has gone to impressive lengths to confirm what we’ve always feared: corners just aren’t worth the excitement and anticipation they provoke.

Analysing data from the Premier League, La Liga, Ligue 1, Bundesliga, Serie A, MLS, Australian A League, Champions League, Europa League, World Cup and European Championships over a five-year period, the committed user ended up with a sample of 11,234 matches and a whopping 115,199 corners.

Some of the most interesting nuggets to come out of his research are as follows:

– 57.3% of corners lead to nothing i.e the attacking team loses the ball

– 26% of corners are not crosses i.e short passes

– A single team on average takes 15.4 matches to score from a corner

There are, of course, notable outliers among these results.

For instance, when Liverpool came so close to winning the Premier League in 2013-14. they scored from a corner every 4.22 matches. Their average in 2016-17 was once every 19 matches.

When Atletico Madrid won La Liga in 2013-14, they recorded the same average as Liverpool under Brendan Rodgers.

West Brom, who Hesussavas dubs his ‘favourites’, went from averaging a goal from a corner every 19 matches to one around one every four matches under Tony Pulis.

For more on our mate Hesussavas’ research, and for an explanation of his controversial conclusion that the more a team scores from corners, the greater the chance they will be relegated, click here.