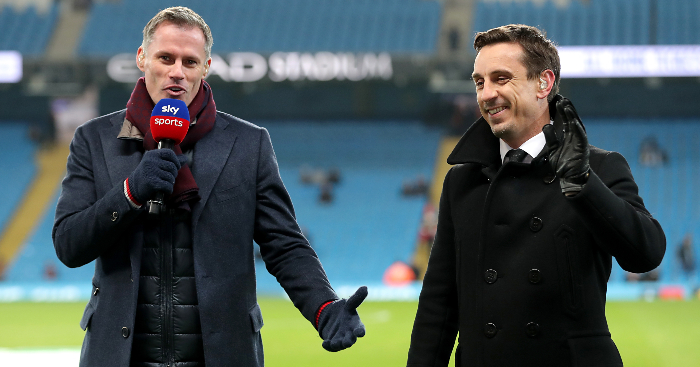 It barely feels like any time’s passed since the long-delayed end to the last Premier League season, but the 2020-21 campaign is already here.

As ever, pundits have been asked to give their predictions for the upcoming season, with intrigue over whether Manchester City will close the gap on runaway champions Liverpool, if Manchester United‘s post-Bruno Fernandes resurgence continues and how more than £200million worth of new recruits will fare at Chelsea.

There’s also Jose Mourinho and Mikel Arteta looking to guide Tottenham and Arsenal into the top four in their first full seasons in charge, Leeds back in the big time under legendary tactician Marcelo Bielsa, and Carlo Ancelotti gifted a new-look midfield at Everton.

Here’s what the pundits have predicted.

“Top three? City, United, Liverpool – but it was more in hope really. I’d take that, well you wouldn’t take it now, but you would,” Gary Neville told Webby & O’Neill, conceding a title challenge might be a bit soon for his old club this year.

“If we [Manchester United] finished second this year, you go third, second… if you look at Jurgen Klopp at Liverpool, it took him four or five years to go from where he did just to keep building up.

“I hope that Ole’s on that same trajectory”

However, in contrary to his weekly predictions over the years, Lawro has some concerns over Liverpool, saying: “My only worry is that the three front players have been unbelievable in terms of the number of games they have played in the past three seasons, so what happens if they get injuries there?”

Harry Redknapp also tipped Liverpool for the title, saying “they look like the winning team to me” on Channel Four’s Sunday Brunch, while Danny Murphy believes that Lionel Messi staying at Barcelona tips the scales in the Reds’ favour.

“Messi at City could have been a total game-changer in the title race because he’s the best player that ever lived. City lost nine times last season but dominated most of them without taking their chances,” he wrote in the Daily Mail.

“City’s football under him has been majestic and it’s puzzling how a squad packed full of world-class stars lost nine league games and ended up 18 points behind Liverpool,” wrote Micah Richards in his Daily Mail column.

“Guardiola will be desperate to wrestle the title back. The title race will be tighter this season.”

Chris Waddle is the only one of the BBC’s 24 pundits not to back either Manchester City or Liverpool for the title. He’s gone with Manchester United.

“There are a lot of games jammed into this season and I am looking at the teams with the biggest squads as the ones who will do well,” he says.

“I don’t think Liverpool will cope. City will, of course, but I just have a sneaky feeling United will spring a surprise. They already have a lot of quality on their books, and they might sign a couple more.”

But Rio Ferdinand isn’t so sure: “I don’t know if United can be serious contenders for the Premier League title this season and it probably depends on what they do in the transfer market,” he told TEAMtalk.

“You look at the impact Bruno Fernandes has had since he arrived at United and it shows what can happen if one player is dropped into a team.”

“I still think Manchester City, rather than Manchester United, will be the biggest obstacle to Liverpool retaining the title, but I do see United getting a lot closer,” Jamie Carragher told Sky Sports.

“The signing of Bruno Fernandes has been fantastic – he was outstanding in the second half of last season and I’m really excited to see him for a full season.”

Not one of the BBC’s 24 pundits backs Jose Mourino to lead Tottenham into the top four, while 22 believe that the same quartet of clubs will qualify for the Champions League – City, Liverpool, Manchester United and Chelsea.

The two exceptions are Joleon Lescott, who thinks Mikel Arteta will take Arsenal to third in the table, and Ian Wright, who backs his former club to sneak fourth.

“Out of all the sides with new young managers – Lampard at Chelsea and Solskjaer at United – Arsenal’s players probably have the best idea of what their manager wants,” argues Lescot. “You can see Arteta’s impact and input the most, and their identity as a team is already there.”

England and Arsenal Women legend Alex Scott believes the Gunners are on the right path under Arteta but that top four is too much of an ask for now, with City, Liverpool, Chelsea and Manchester United her top four.

“They are not in my top four, but they will not be far away,” she says of Arsenal. “We’ve already seen such a big turnaround from them in such a short space of time under Mikel Arteta and I am expecting them to keep on improving too.

“I just think when you look at the other four teams, they are all stronger. We can compete with them in one-off games like we showed when we won the FA Cup, but not yet over the course of a league season.”

“Spurs will be organised and get results, but we are talking about a top-six finish rather than the top four,” says Jenas. “Even that will be a battle because Leicester and Wolves are going to be strong again, and Everton have made some good signings.”

“I’m going to say West Brom and Fulham [for relegation],” says Neville. “And I’m also going to say Villa, because I said it a couple of weeks ago, even though I don’t want them to. I just think they’re going to struggle.”

In Robbie Savage’s column for the Daily Mirror, he reserved special praise for Marcelo Bielsa’s newly-promoted Leeds United – but says he wouldn’t be too surprised if they finished bottom.

“Marcelo Bielsa coaching in the Premier League will be one of the most fascinating sub-plots of the season and, as an attacking force, record signing Rodrigo will give Leeds a focal point,” he wrote.

“I hope they do well, and they could finish anywhere between the top six and the bottom three, but I suspect it will be somewhere in the middle.”

The former Wales international went on to tip Aston Villa for 18th, Fulham for 19th and West Brom in 20th.