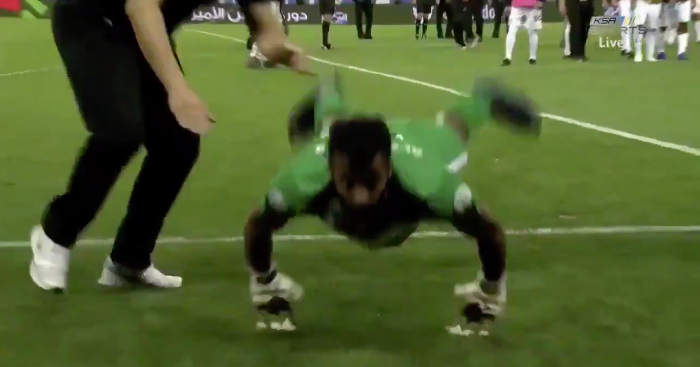 Sometimes, there can be no feeling more joyful in football than pure spite.

Think Jose Mourinho celebrating down the Anfield touchline after winning 2-0, in that Demba Ba game.

Chelsea had already thrown away their own title challenge, and in the end the three points mattered little beyond sticking it to their rivals, ruining their chance of the winning the league – yet fans still sing about it five years on.

A goalkeeper in Saudi Arabia has just enjoyed his own Mourinho moment, and he milked it absolutely sensationally.

Ohod keeper Abdullah Al-Owaishir loved keeping a clean sheet against title challengers Al Hilal so much that he celebrated by doing the worm as he made his way off the pitch, wriggling around to avoid the torrent of bottles and a shoe (?!) raining down upon him by the incensed opposition fans.

Seven points adrift at the bottom of the table with only a few games left to play, Ohod are almost certainly going to be relegated anyway, but that didn’t really matter to Al-Owaishir, who only joined the club a few weeks ago.

Their opponents Al-Hilal are like the Juventus or Bayern Munich of Saudi Arabia, perennial champions that are almost universally hated by supporters of every other team. With 15 league titles in total, they’ve won it almost twice as many times as the next-most successful club.

Given their riches, they boast a number of ageing foreign superstars, including former Juventus forward Sebastian Giovinco and Bafétimbi Gomis up front, but neither could breach Al-Owaishir’s goal.

Ohod, meanwhile, have a team made up of largely homegrown and local players – so denying the league leaders all three points in a goalless draw will have been especially sweet.

The result means that while Al-Hilal remain at the top of the table, things are set to go right down to the wire after their lead was reduced to just two points. The chasers, Al-Nasr, boast former Liverpool keeper Brad Jones as well as Leicester flop Ahmed Musa up top, and the two sides play one another next week.

Al-Hilal may well go on to win and eventually lift yet another title, but if they do, Al-Owaishir will always have this; an act of p*ss-boiling so monumental that it forced a grown man in the stands to undo his laces, grab his shoe, and aim it square for him.

In the words of Ron Atkinson: “He’s not only a good player, but he’s spiteful in the nicest sense of the world.”

Kaiser, the ‘fake footballer’ who made us question everything we know