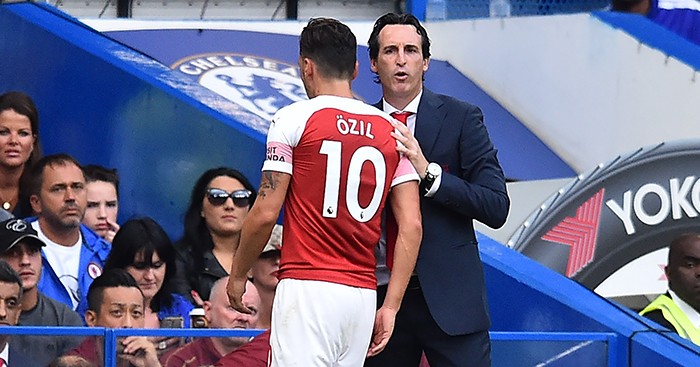 Mesut Ozil’s future in the Arsenal team is the subject of speculation due to a perceived lack of defensive contribution, but how does he fare in that respect compared to the club’s other attacking midfielders?

It has been suggested Ozil could struggle to hold down a place under Unai Emery, who favours a pressing game, and the German was left out of the squad to face West Ham United on Saturday, though the Gunners boss insisted he was ill.

We’ve compared Ozil’s defensive stats to the other attacking midfielders at Arsenal to see where he might need to improve to keep on side with Emery.

In 26 Premier League appearances last season, Ozil committed to an average of 1.5 tackles per 90 minutes, winning 0.8 at a success rate of 53%.

All of their stats, however, pale in comparison to Henrikh Mkhitaryan’s, with the Armenian attempting 3.1 tackles per 90 minutes – only Shkodran Mustafi and Granit Xhaka commited to more – and winning 1.6 of them.

This season, it is clear which players have adapted to Emery’s demands quickest, with Lacazette making a squad-high 6.5 tackles per 90 minutes so far, albeit winning only 2.8.

Welbeck is second in the squad for tackles attempted with 5.6 per 90 minutes – and impressively he has won every won of them so far.

Aaron Ramsey, meanwhile, has been used in a more advanced role and has attempted 4.9 tackles per 90 minutes, winning 2.2.

When it comes to the crucial interceptions, Ozil averaged just 0.5 per 90 minutes in 2017-18, but so far this season the German midfielder is yet to make a single one.

Mkhitaryan made an average of 0.7 interceptions per 90 minutes and has already made a couple this season, while Ramsey has also made one.

To be fair, defending set pieces isn’t something you’d expect from Ozil, and last season he made an average of 0.2 clearances per 90 minutes.

There seems to be a little more expectation on their shoulders this season, however, with Ozil (1), Mkhitaryan (1), Aubameyang (1), Lacazette (1) and Iwobi (2) all clearing their lines.