A timeline of Mauro Icardi’s most controversial moments in Italy 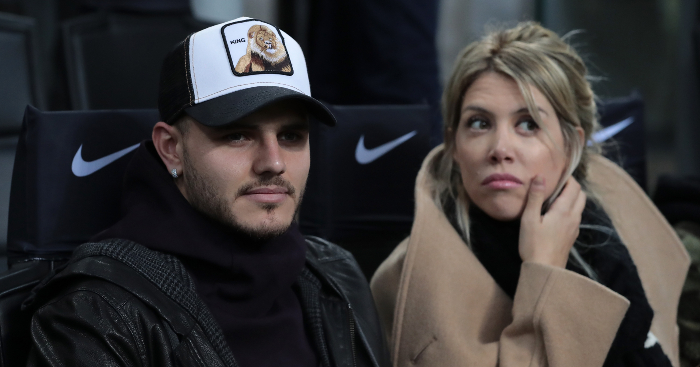 Rarely a week goes by that Inter Milan‘s Mauro Icardi isn’t in the headlines.

Plenty of this is due to his ability. His canny knack for poaching has seen him tot up over 100 Serie A goals in six seasons with I Nerazzurri, leading to links with the likes of Real Madrid and Bayern Munich.

While by all accounts he’s happy in Milan, he’s done plenty to upset the apple cart and is currently embroiled in a new row with the club. Here’s a summary of Icardi’s time in Serie A so far.

After failing to get a foot in at Barcelona, coming through the academy as Pep Guardiola conquered everything with the senior team, Icardi had to go to Sampdoria to get his breakthrough. Scoring 10 league goals in the 2012-13 season, Inter were impressed enough to take a punt on him, announcing a €6.5million transfer for that summer.

It was during his time at Sampdoria that Icardi met his future wife and agent Wanda Nara, who was married to his team-mate Maxi Lopez at the time.

The Italian tabloids had a field day as details emerged of the relationship between Icardi and Lopez’s estranged wife Nara, with the forward taking to social media to declare his love.

Within weeks, they already had tattoos of one another’s names.

Both Argentinians, it had been suggested that Lopez, nine years Icardi’s senior, took the then-teenager under his wing at Sampdoria.

Some have said it was an affair, but Nara insisted that she had separated from Lopez when the relationship started, while Icardi quickly pointed out that he and Maxi Lopez were never friends.

Whatever the story, matches between Inter and Sampdoria became known as the “Wanda Derby” in the subsequent years as Lopez snubbed Icardi’s pre-match handshakes.

Things would take a particularly nasty turn as Icardi, in the lead up to the first match between the two since the scandal emerged, defied Lopez’s requests not to post photos with his children on social media and accused him of neglecting them.

In the game itself, Icardi opened the scoring against his former club and celebrated pointedly in front of the jeering fans, while fate conspired to see Lopez miss a penalty that would have levelled things up five minutes later.

Inter went on to win 4-0 as Icardi scored another.

Roberto Mancini failed to replicate the earlier success during his second spell at Inter, and few seasons have summed up their post-treble fallow years than finishing eighth in 2014-15, 14 points off a Champions League qualification spot.

Things came to a head when they lost 3-1 to Sassuolo that February, a side they had already beaten 7-0 earlier in the season. Icardi scored Inter’s consolation, but the ultras didn’t respond kindly when he threw his shirt to them after the match.

After getting his shirt thrown back in his face, Icardi used some choice language in response to the angry travelling support.

He was already captain of Inter at 22 years of age, but he’s endured something of a love-hate relationship with the club’s most dedicated supporters.

Things had long been smoothed over with the fans, but an almighty new row erupted after Icardi published an autobiography Sempre Avanti (‘Always Ahead’).

Revisiting the incident at Sassuolo, Icardi called out the ultras.

‘It’s a shame that a head Ultra flew over to him, took the shirt from his hands and threw it after me with disgust,’ read the incendiary passage. ‘In that instant I was beside myself, I would have punched him for that bastard’s gesture he’d just pulled.

‘So I started to insult him harshly. “Piece of shit, you act the big man and all powerful with a little kid to show off in front of the Curva. You should only be ashamed. You should all be ashamed.” After saying that, I threw the shirt in his face. In that moment, everything kicked off like the world was ending.’

Think that’s a bit much? He went on to go one further, doing the literary equivalent of calling the ultras outside for a scrap.

‘I’m ready to face them one by one. Maybe they don’t know that I grew up in one of the South American neighbourhoods with the highest rates of crime and people killed in the street.

‘How many of them are there? Fifty? A hundred? Two hundred? OK, record my message and let them hear it. I will bring 100 criminals from Argentina who will kill them on the spot.’

As you can imagine, that worked out well for him. He was forced to backtrack from his comments after there were calls for his captaincy to be stripped. The incendiary pages were withdrawn from the final copy.

Nara has continued to make waves in the background, using her considerable media presence to lobby for her husband, attempting to leverage a new contract in the process.

Given that Icardi hadn’t scored in seven league games, the timing could have been better.

Inter have reportedly requested that Icardi gets a new agent, if not a new wife, while Icardi’s sister Ivana is not happy. She’s said that Icardi needs to find “someone who really has [his] interests at heart”, adding “I want my brother back” and calling Nara “a viper”.

Inter have responded to the behind-the-scenes wranglings by stripping Icardi of the captaincy.

Ivana Icardi, Mauro's sister (and not a fan of Wanda), has sent a message out saying…

'My poor brother, why does he continue to allow this? An Inter they don't allow these attitudes. If he had a serious person behind him, who took care of him, this wouldn't happen.' [CN24] pic.twitter.com/iKkhDGGU8Q

Inter’s chief executive Giuseppe Marotta explained that it was “not a disciplinary matter but rather a change that we considered better for the team, club and Icardi himself.”

“Spalletti was heavily involved in the decision and it had more to do with the behaviour on a daily basis rather than any one-off incidents,” he added.

“It’s a growth process and we decided to make this change to help everyone progress together as a group. Sometimes the head of the house has to take an unpopular decision for the good of the family.”

Icardi has since refused to travel with Inter for their Europa League clash against Rapid Vienna, since showing remorse in a big to regain the armband. He’s not played for the club since this latest row erupted, but the player has said it’s because of a knee injury.

Whatever happens next, don’t expect it to be low-key.