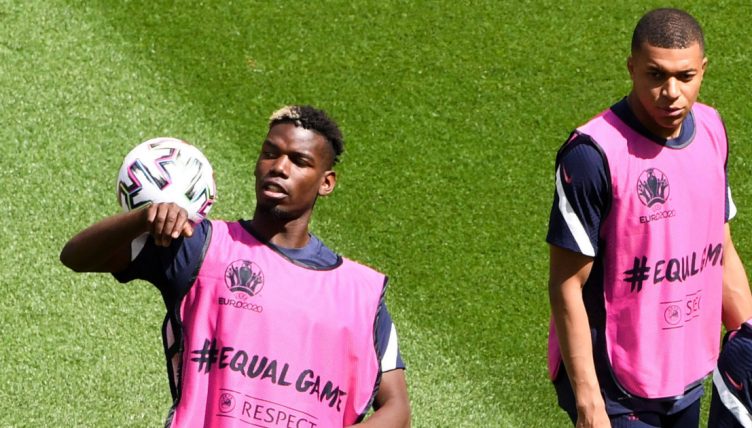 The year 2022 will see the contracts of some of the games most exciting players come to an end.

From Paul Pogba to Kylian Mbappe, hundreds of players will be free to decide their own future for themselves and to negotiate with clubs about potentially moving their next summer.

That’s all thanks to the Bosman ruling in 1995 when the European Court of Justice decided that players should be able to freely move to another club at the end of their contract.

Since then plenty of players have availed of the option, and we’ve put together a frighteningly good starting 11 of those who are able to negotiate with clubs this coming January.

This summer will mark a decade since Lloris signed for Tottenham.

In that time he has become club captain, lifted a World Cup as French captain and with Spurs won… oh wait he’s won nothing with Spurs? Really?

At 32, this summer could be his last chance to make a move to another team at the elite level of the European game, so it makes sense he hasn’t yet signed a new Spurs contract.

But with most of the big clubs happy with their No.1s it raises questions about where he could go and staying on at The Tottenham Hotspur Stadium (they really need to change the name by the way) might still be his best option.

Perhaps no team in the world produces such a perfect blend of quality and quantity of young players than Ajax.

The latest out of their lab is Moroccan right-back Mazraoui but while most of Ajax’s talent is able to be sold, Mazraoui could leave for free this summer.

The 24-year-old has cemented himself as a crucial part of Eric Ten Hag’s second great Ajax side and his signature will be hotly fought over.

A plethora of clubs are already supposedly interested including Barcelona, who despite being poor somehow are linked with everyone, and Bayern Munich.

-Blind side movement to be available option to receive the ball and help in ball progression.
-Moving from his initial position from wide areas to half-space.
-Pass the ball to Antony & run into half-space.
Noussair Mazraoui – Ajax fcpic.twitter.com/sJcYYNXps3

Yet talks on renewing his contract have stalled, with the German supposedly disappointed at Chelsea’s proposals.

All the usual European giants are interested, with Real Madrid and Bayern supposedly ready to submit an offer if Chelsea don’t improve theirs.

This centre-back partnership has a distinctly German feel to it, with Niklas Sule partnering Rudiger.

The Bayern Munich man has six months left on his current deal and is reportedly all but certain to leave, with Newcastle interested in bringing the German in this January to save them from relegation rather than wait until the summer.

This is probably the one person on this list whose name you probably don’t know right away, but you should.

Mandava is Lille’s left-back and was part of their title-winning side last season.

The Mozambican joined from Portuguese side Belenenses SAD in 2019 and a return to Portugal with a top team might be on the cards.

The latest “What if Paul Pogba…” stuff you’ll be seeing online for the next six months will be all about where he goes next if he goes anywhere.

As usual, nothing is straightforward when it comes to Pogba and there is no indication whether he’s going to be staying at Old Trafford or leaving on a free for the second time.

A contract offer has been on the table from Manchester United since July, but it has not been accepted or rejected.

He could return to Juventus, where he is much needed and he won’t be pressed constantly, or make the ‘dream move’ he’s mentioned in the past to Real Madrid. PSG would probably have him as well.

Project “What if Ralf Rangnick is able to get the best out of Pogba?” will begin soon.

Manchester United are not negotiating with any club to sell Paul Pogba in January, as things stand. No proposal, no swap deals or similar. Contract extension bid still on the table since last July. 🔴 #MUFC

No decision made by Paul on his future yet – Man Utd are still waiting. pic.twitter.com/hLuGtYqFPh

Kessie is the beating heart of AC Milan. Technically gifted, tenacious to a fault and perfect at penalties, the Ivorian has been at the centre of Milan’s return to Champions League football.

But with his contract up in the summer, the 25-years-old will be a wanted player.

He has made recent mistakes in a Milan shirt and the first contract approaches were rejected with there being a reportedly sizeable distance in the wages offered and the wages demanded.

If Dembele leaves for free in the summer, surely no other players in history will have left a club for nothing after having cost so much.

Dembele joined Barcelona from Borussia Dortmund four years ago and has been a permanent resident in the injury room since becoming one of the most expensive items of furniture in history, costing the Catalan club over £100million.

Xavi wants him to say, with a sizeable wage cut of course, and it is clear that the player has bags of talent. But if he can’t stay fit and find form it could be a mistake for him to extend his time with Barca.

Could a fresh start at money-bags Newcastle or elsewhere be a better option?

The Juventus player is coming towards the end of his contract with negotiations not yet finalised over his deal.

With Cristiano Ronaldo leaving, he is perhaps the number one star still at the club but has recently struggled with injuries and his form has not hit the heights it once did.

He is another player who will no doubt have plenty of suitors if he decides to leave, with Juventus supposedly stalling over increasing his wage increase. The Premier League could therefore become an option.

No one really wants Insigne to leave. Naples born and bred, he is the captain of an exciting Napoli side and their star player as well as a Euro 2020 winner with Italy.

At 30-years-old he’s frankly still young in Serie A terms, but rumours are awash that he will be the next big MLS star, with Toronto reportedly putting together a mammoth bid.

Poutine’s nice Lorenzo, but it’s nothing on Pizza.

Lorenzo Insigne to Toronto FC is actually becoming more of a reality. TFC has submitted an offer of just over $9M per year to Insigne, for 3 years. Napoli has not reached an agreement with the Italian winger at this time, with 6 months left. #TFCLive #MLS pic.twitter.com/NKP6TDbPYJ

You knew it was coming.

So many questions remain unanswered about the future of Mbappe with no one quite sure where he will end up.

Where will he go? (Real Madrid) What league will he tear up? (La Liga) Will he stay and become the jewel in the crown of French football? (No).

He is undeniably a starboy (some might say a ‘galactico’) who will demand a high wage wherever he goes and with the World Cup already ticked off his list, it will be the Champions League on his mind when he chooses where to go.

Alongside Erling Haaland, he will be one of the two new sides in the bipolar European football cold war with people flocking to either peak in a desperate effort to recreate the Messi/Ronaldo praxis.

Which is why you sense Mbappe already knows exactly where he’s going.

An XI of the best free agents to sign on FM2022: Paulinho, Giovinco…