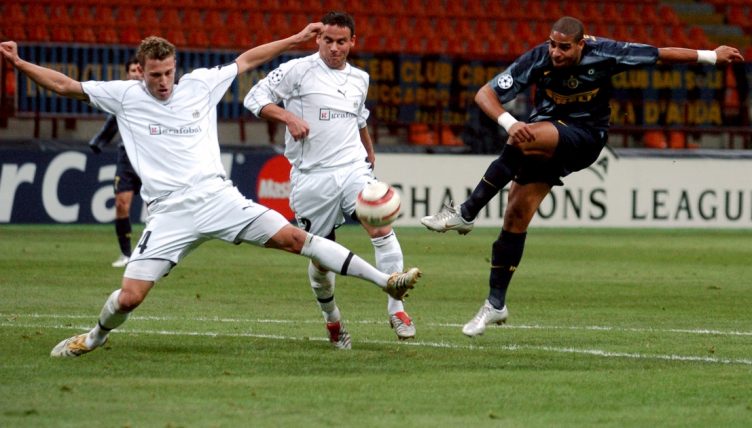 No footballer in the history of the sport has been more worthy of a compilation of their goals set to Alan Partridge’s “foot like a traction engine” commentary as Serie A cult hero Adriano.

While the Brazilian couldn’t quite maintain his Pro-Evo pomp in real life, he was a force of nature on his day. There was a reason his left peg had a reputation as the most lethal around, so we thought we’d rank the forward’s most thunderous thunderbastards.

These aren’t Adriano’s best goals in general – he also scored some wonderful solo goals and delicately-chipped finishes – but 10 of his best rockets. If you can’t imagine Andy Townsend saying the ball “stayed hit”, we’re not counting it.

This was after Adriano returned home to Brazil, with his powers on the wane.

But he certainly wasn’t down and out at Flamengo – this was one of 19 goals from 30 games as they won the Campeonato Brasileiro Serie A in 2009.

You know you’re in trouble when he gets teed-up like this.

It was only a friendly and far from his most famous or celebrated strike, but we love how emphatic this finish is. Pure Adriano.

The closest range goal we’ve gone for here, he still does brilliantly to take this ball down and connect with it as he does on the half volley.

But we’ve mostly included this one for the context: a crucial equaliser in the final minute of injury-time in the 2004 Copa America final against the old enemy Argentina. He went on to score the first penalty as Brazil beat Marcelo Bielsa’s side in the shootout.

A year after the Copa America final, Adriano made Argentina suffer again, at the absolute peak of his powers at the 2005 Confederations Cup.

He scored twice against hosts Germany in the semi, and twice again as Brazil thrashed La Alibiceleste 4-1 in the final.

Named player of the tournament and top scorer with five goals, this one wasn’t even the best of the lot…

Remember when Greece completely upset the odds with a series of rearguard displays to somehow win Euro 2004?

France, the Czech Republic and Portugal found no way through, but a year later there was no stopping Adriano.

Just a daft distance to score from, and you can’t even blame the keeper. Three minutes later he notched another by dribbling from his own half.

We recommend putting the sound on for some classic Italian commentary here.

Adriano’s short stint at Roma in 2010-11 – eight appearances, no goals – never lived up to expectations.

But how could he when they’d seen first-hand he could wallop goals in like this?

*Alan Partridge voice*: “SHIT! Did you see that!?”

This may only have been from just outside the box, but the close proximity somehow makes this more satisfying. He just leathers it ridiculously hard, and it flies in on the underside of the crossbar – what more do you want from an Adriano goal?

This is No.1 in terms of the shots we’d least want to be in the way of, which of course makes it No.1 overall.

The story of Gigi Simoni, Inter, Ronaldo and the great Serie A controversy of 1998