All you need to know about Liverpool target Aguibou Camara 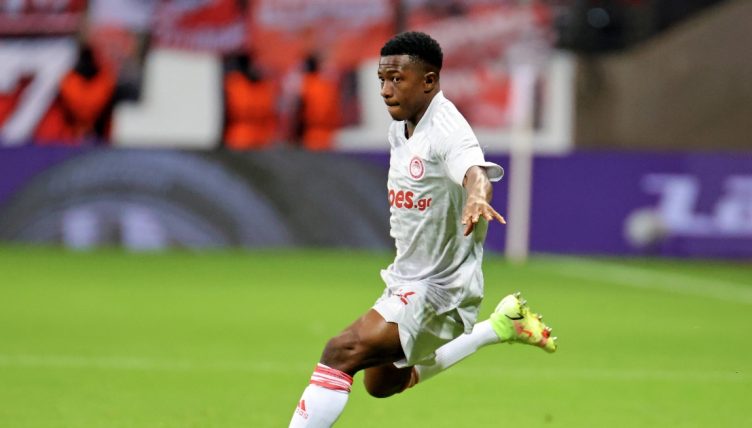 The African Cup of Nations is almost upon us, a competition that’s traditionally been treated as a treasure chest by European scouts – with Liverpool reportedly eyeing up Guinea midfielder Aguibou Camara.

Camara, who currently plays for Greek side Olympiacos, has attracted attention from a host of elite clubs including AC Milan and Juventus. But you’d forgive Liverpool supporters for not knowing too much about their latest transfer target.

We’ve collected everything you need to know about the 20-year-old in one convenient place.

Camara is currently enjoying a wonderful first senior season with Olympiacos, having joined the Greek giants in the summer.

Having only signed his first professional contract as recently as March 2019, the youngster broke through the ranks at Lille and grabbed his only first-team chance with the club.

Making his professional debut in a Coupe de France match against Dijon, Camara raced through and scored the only goal of the game.

That wasn’t enough for him to remain at the French champions and the winger swapped Lille for Olympiacos in the summer of 2021.

The 20-year-old has enjoyed something of a breakout season in Greece, scoring four times in 25 appearances and impressing with his overall play for the runaway league leaders.

Camara has already earned eight senior caps for his native Guinea, with seven of them coming in 2021, and he scored his first international goal during an impressive friendly win over Nigeria.

Guinea have already been eliminated from World Cup qualifying but will participate in this month’s African Cup of Nations.

Liverpool have been linked with Camara since October 2021 with Greek outlet Sportime reporting the interest from the Reds.

These rumours have persisted and The Sun has reported that Liverpool remain interested in the midfielder going into the January transfer window. Premier League rivals Leicester City and Newcastle United (of course) have also registered their desire to sign the player.

Camara plays as an attacking midfielder for his current club. He is versatile in this role, showing attributes of a box-to-box player but also of an advanced playmaker and a shadow striker – in other words, an elite manager’s dream.

Every inch the modern athlete, Camara can get around the pitch with ease but is also very strong in the tackle and can pick a pass too. This has generated comparisons to the great N’Golo Kante although, in reality, the youngster plays a far more advanced role.

His standout attribute is probably his ball-carrying, as he is capable of marauding through the middle with ease – leaving a trail of opponents in his wake.

You can see why Jurgen Klopp would be interested in his services.

“Very happy to be called up for the first time in the national team to compete in the Africa Cup of Nations. Looking forward to participating in the celebration of African football and fighting for the honour of the nation ” – upon being included in Guinea’s AFCON squad.

“I found him very solid in his game, disciplined tactically. He scored a decisive goal, it’s good for him, it’s an extra step for a young boy who often works with us and hasn’t played since March,” said Christophe Galtier during his spell as Lille manager.

“He arrived last season, I saw him play in the reserve team. I find him, at 19, having a certain personality in the game he doesn’t lose a lot of balls, he’s solid on his supports, and also versatile because he can play right or left.

“He is someone who quickly prints what is asked of him and corrects his mistakes so quickly. And, importantly, he enjoys a very special affection on the part of the group.”