‘Like a young Cristiano’ – 13 amazing quotes about Alejandro Garnacho 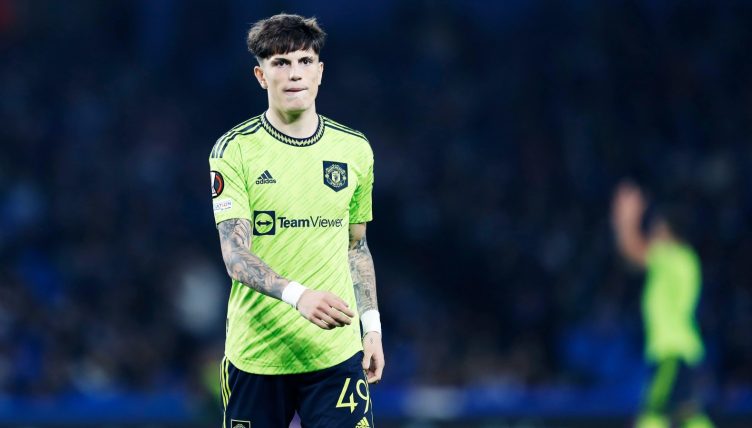 Despite only being 18 years old, Manchester United’s Alejandro Garnacho already looks set for a big future.

Signed from Atletico Madrid in 2020, Garnacho has become United’s biggest young name and enjoyed an outstanding 2021-22. He helped the club win the FA Youth Cup and was the recipient of the club’s prestigious Jimmy Murphy Young Player of the Year award.

And the Argentine has impressed during his first-team appearances under Erik ten Hag this season, scoring his first senior goal in the 1-0 win over Real Sociedad in November 2022.

After receiving rave reviews from a number of big names, we’ve taken a look at what people have been saying about Garnacho.

“He has to keep learning, at his age he’s in a team that isn’t easy [to get into],” Martinez said in October. “I tell him he has to take advantage of the moment, listen, ask for advice, do extra training.

“He has no ceiling. He will give Manchester United and the national team a lot.”

“He [Garnacho] was good, but he knows we expect a lot from him,” Fernandes told BT Sport after the win over Real Sociedad.

“In the [pre-season] tour, he didn’t have the best attitude. That’s why he didn’t get chances. Now he’s getting his chances because he’s training better, ]he has a] different attitude, and he deserves it.”

“That second touch really makes the goal, he gets it out of his feet and slides it into the top corner. “I think he’s been far and away the biggest attacking threat on the pitch. I don’t think the keeper covers himself in glory, but it’s a lovely finish.”

And, during a previous match against Sheriff Tiraspol, the former United midfielder said: “This crowd they love entertainment. I think this lad was really entertaining. Almost like a young Cristiano at that age.

What a way to score your first Manchester United goal… keep an eye on this youngster! 🤩#UEL pic.twitter.com/WRekZ9V2Bw

“That’s the great thing about young kids, they play with a real enthusiasm,” Hargreaves told BT Sport viewers. “Every time he touches it he runs forward, the first touch is amazing. It is great to see him mentored by Cristiano [Ronaldo].

“He’s a really good player and it’s nice to see him performing on the biggest stage.”

“Alejandro is a great player, with a lot of potential to continue growing,” said Mascherano after Garnacho’s starring role for Argentina in the 2022 Toulon tournament.

“It is clear that by playing in the club he plays for, and above all the importance his club gives him for the future, will depend on him for what he is capable of.”

“Garnacho has been training with us [the first team] for the last two weeks and I know that he is one of the most promising players,” United’s then interim manager Rangnick told the club’s website at the start of April 2022.

“Still only 17, but a player that hopefully if he keeps his feet on the ground. If he keeps trying to get better every day, he will not only be sitting on the bench but there is every chance he will be playing for this club.”

“He has to work hard and get physically stronger but technically on the ball he’s been training with us for the past month and you can see with every training session he’s getting better.”

“He’s a talented boy. I think some of his performances have caught the eye. He’s one of many talented boys we’ve got,” United’s Head of Academy Cox said in March after the winger was called up from the Argentina national team.

“We’ve been in constant dialogue with him about what he might do. This is pretty fresh news. He’s yet to make a decision. I know he’s proud of his heritage, he’s proud of both countries. I think he’s honoured that both countries have an interest in him.

“And, really, the take-home message for me is ‘you’re doing OK if you’ve got two countries that are interested in selecting you’.”

– Cox was also full of praise for the youngster when he announced that he had been selected as the winner of the prestigious Jimmy Murphy Young Player of the Year award.

“Alejandro has had a fantastic season and really deserves this recognition,” Cox said.

“There have been a number of Under-18s players who have performed exceptionally well throughout the year. Reaching an FA Youth Cup final is a fantastic achievement, so this was not an easy decision to make.

“Alejandro has shown great determination from the day that he arrived here from Spain, in the middle of a pandemic. He has adapted extremely well to life in Manchester and continues to improve on the pitch every day.

“Making his first-team debut last month was the culmination of a great deal of hard work from Alejandro himself, his family and a dedicated group of academy staff. The call-up that he received from Argentina is another fantastic indicator of the progress he has made this season.

“He remains grounded considering all that he has achieved this year and we know that he will continue to grow within our youth development system.”

“That boy could be in any stadium in the world and he wouldn’t care,” United Under-18s manager Binnion said after Garnacho’s FA Youth Cup Final performance.

“That’s his make-up. A few of them are like that and that’s why they are going to have good careers.

“This football club is remarkable at that. It’s the best in the world at that. We have to keep that going, we have a responsibility to keep that going – the pipeline. It’s nice to give the fans a bit of something because they’re different class.”

– “He comes on the other night [against Chelsea] and doesn’t touch the ball, but the reception he gets for two minutes, I don’t think you get that at other clubs,” he told the Manchester Evening News.

“It is the culmination of years and years of work. He has done something that most people will never do in their lifetime and he will go on and get better and better.

“Literally, a month ago he was part of this group and now he is part of the first-team squad. It is inspirational because there are boys in the group who feel they are going to be better than him and you have to have that belief in yourself as a player.”

“If we can’t get out, we can play it to him and he’s got very good feet and he gets out of tight situations, which helps us as a team as it gets us up the pitch and we can squeeze.”

“He’s popped up with another great moment to send the boys through,” the former United midfielder told MUTV after Garnacho scored a late winner against Leicester in the FA Youth Cup.

“He’s a moments man, he produces moments when you need it. I’m really impressed with him with each game.”

“That’s ridiculous play from him [Garnacho],” former United youth product Brandy said on MUTV after Garnacho scored against Everton in the fifth round of the Youth Cup.

“It looks like the first minute of a game, showing no tiredness, and composure when he gets in the box.

“I’m happy for him. He was Man of the Match, him or Kobbie Mainoo.”

– “He’s a full-back’s nightmare, can go either side, cut inside, he makes it difficult for defenders all game,” Brandy added after the sem-final win over Wolves. “He is a great talent with a very bright future.”

– “He kept showing for the ball,” Brandy said after the win over Nottingham Forest. “He’s got a third, fourth, fifth gear when defender don’t expect it.

“He’s got a big future in football, if he does everything right he’s got a very good chance.”

“The 17-year-old Argentine-Spanish forward is riding the crest of a wave at the moment and taking all the inspiration he can from arguably the two greatest players of all time,” Telegraph journalist Ducker wrote in an article about Garnacho.

“There are not many teenagers who get to lean on Ronaldo and Lionel Messi but Garnacho has been up, close and personal with both during a whirlwind past few months.

“Garnacho has surpassed expectations over the past 12 months, during which time he has matured significantly on and off the pitch and followed in the footsteps of Marcus Rashford, Ryan Giggs and Paul Scholes by landing the prestigious Jimmy Murphy Young Player of the Year award.”

-Top scorer of the competition⚽️

“Some of the games with the 23s have been challenging for him. He’s coming up against more physical players, faster players and stronger players, that’s what is coming towards him, he’s not going to play Under-18s forever.

“When he’s running at players he’s a threat. He’s the type of player who gets the crowd excited, he’s a dribbler, he likes to run at players, but he’s got a lot of improving and developing to do.”

TRY A QUIZ: Can you name every club Beckham scored against for Man Utd?