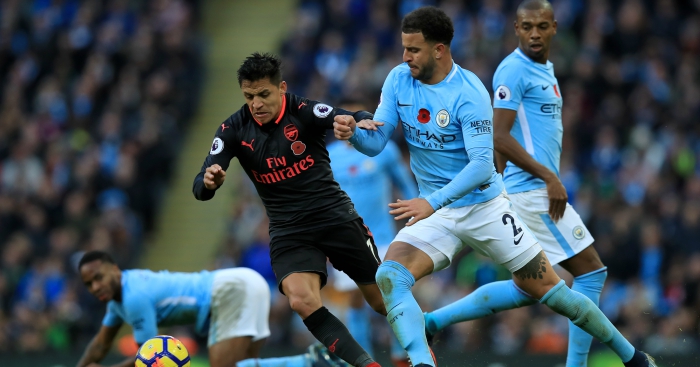 Alexis Sanchez’s move from Arsenal to Manchester City is getting extremely close, according to reports.

The league leaders already have a wealth of attacking talent at their disposal, but Sanchez is able to operate both out wide and through the middle, clearly making him an attractive option to Pep Guardiola.

We’ve compared his 2017-18 Premier League stats to his potential rivals for a place at City – Raheem Sterling, Gabriel Jesus, Sergio Aguero and Leroy Sane – to analyse where he might fit in.

Sterling, the Premier League’s third highest scorer, has been directly involved in the most goals to date of these five players, adding four assists to his 14 goals so far this term.

Despite scoring fewer goals than Jesus (8) and Sanchez (7), Sane (6) has claimed nine assists, meaning he has had a direct hand in 15 goals.

Jesus may have scored once more than Sanchez, but both players have been directly involved in 10 Premier League goals this term.

Aguero, arguably the Arsenal man’s direct rival for a place in the starting XI, has scored 13 goals and provided four assists.

Sanchez averages a goal every 215 minutes, with only Sane (one every 228.5 minutes) having a worse record this season.

Jesus averages one every 127 minutes, Sterling one every 108 minutes and Aguero one every 103 minutes. In other words, whoever City play and whoever their opponents.

Manchester City have reached an agreement with Alexis #Sanchez for free transfer: wage £13M/year + £30M to Alexis when he'll sign the contract.

If Arsenal would accept to sell him now in January, Man City will pay £20M to Gunners 🇨🇱 🇬🇧 #MCFC #ManCity #Arsenal #transfers

Sanchez has taken more shots in total than any of Manchester City’s attackers with 69 attempts on goal in the Premier League so far this campaign.

Given his high number of shots, Sanchez has recorded the lowest conversion rate, hitting the back of the net with just 10.14% of his efforts.

Aguero (12) and Jesus (11), however, have missed the most big chances this season, while Sanchez, Sterling and Sane have all missed in five similar situations.

Manchester City are actually buying Alexis. Oh, my aching heart. What a squad they will have.

Sanchez leads the way in terms of the number of chances created, the Chilean setting up team-mates 51 times this season, with Sane on 33, Sterling 32, Aguero 23 and Jesus just 11.

And the 29-year-old has also recorded the highest number of successful passes per 90 minutes with 37.7.

Wenger says there's been no approach for Alexis Sanchez so far, and won't say whether he'll sell him in January. "When solicitations happen you respond to it. But at the moment it’s very quiet."

Sterling and Sane share the highest tackle success rate with 80%.

Should Sanchez sign for City, the only thing for certain is that it will make Pep Guardiola’s men even more formidable. Keep an eye out for the best bets on their matches using StrataBet’s betting signals.

Can you name every team Alexis Sanchez has scored against for Arsenal?