Six of Alisson’s most iconic and decisive moments at Liverpool 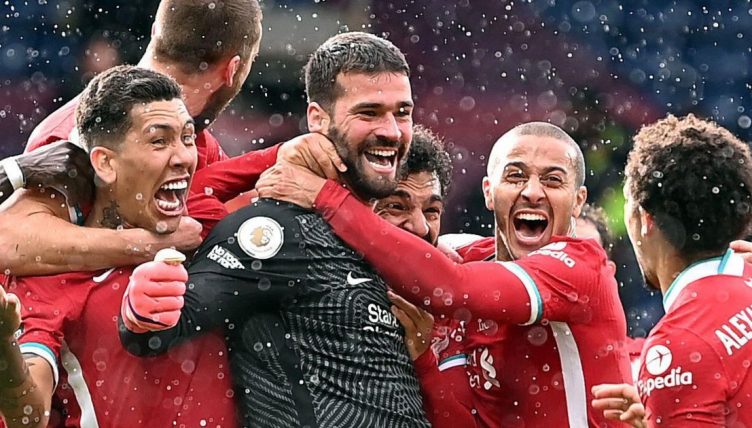 Ever since Jurgen Klopp brought Alisson Becker to Liverpool from Roma in July 2018 for a then-world-record fee for a goalkeeper, the Brazil international has been a key player in what’s been a golden period for the club.

The Reds were in desperate need of a competent stopper for what felt like years – probably since Pepe Reina’s departure in 2012.

But it took a disastrous Loris Karius display in the 2018 Champions League final for Klopp to splash the cash and sign an elite operator in this position.

“We got him here because of his existing strengths, which is in all goalkeeper departments the highest level,” Klopp said when Alisson arrived at Anfield.

The German wasn’t wrong in his assessment. Alisson has starred in an all-conquering juggernaut that’s won every trophy on offer over the last four and a half seasons.

We’ve picked out – and ranked – six of the giant goalkeeper’s most iconic moments at Liverpool so far.

It was Merseyside derby day in December 2018. The contest looked destined to end goalless at Anfield. But Divock Origi had other ideas.

Origi’s late winner sparked jubilant scenes as the Reds grabbed the bragging rights as so often has been the case with this fixture in the Premier League era.

Klopp stormed onto the pitch like a mad man. Understandably overcome with joy, the German boss raced over to Alisson. They greeted each other with a huge bear-hug.

For all of the hugs that the German has dished out over the years, this one sticks out in the memory.

Liverpool had it all to do when Barcelona rocked up at Anfield in 2019 in the Champions League semi-final. The Catalans arrived on Merseyside with a three-goal first leg lead.

The Reds were without two of their famous front three – Mohamed Salah and Roberto Firmino -, making the task of overcoming a huge deficit all the more difficult.

Thanks to braces from Origi and Georginio Wijnaldum, Klopp masterminded one of the greatest comebacks in Champions League history to send his team to the second European final of his reign at the time.

As well as finding goals, it was equally as important that Liverpool kept a clean sheet if they wanted to progress.

In the first half, Barca created a number of goalscoring opportunities. However, Alisson was like a man possessed as he refused to be beaten, pulling out a string of saves. One from Jordi Alba was arguably the most impressive.

He wasn’t too bad in the second period either. Although he was largely untroubled, denying Luis Suarez’s snapshot ensured that the Catalan side were sent packing.

Alisson has regularly been praised – quite rightly – for his distribution skills to start attacks under Klopp’s stewardship. But his assist for Salah in a 2-0 win over arch-rivals Manchester United in January 2020 was simply outrageous.

The Reds were on the hunt for their first league title in 30 years as United came to town. Virgil van Dijk’s headed finish in the 14th minute left you thinking that Ole Gunnar Solskjaer’s serial underperformers would crumble.

The opposite happened. The Red Devils knocked on the door in the second period in their quest to restore parity. Then in the dying embers, Alisson hit a long pass that Xabi Alonso would have been proud of.

He caught the ball and successfully found the Egypt international who raced away before slotting past David De Gea’s legs to complete a win that saw Liverpool strengthen their 2019-20 title credentials.

The Brazilian embarked on a lung-busting sprint to join in with the wild celebrations in front of the Kop.

The assist from Alisson. The run and finish from Salah. The celebration. 🤯

A huge Premier League moment, one year ago today ✨

3. Unbelievable save against Napoli in the Champions League – 2018

It was just a few months into Alisson’s debut season at the Reds when he pulled out a stop from the heavens to save Liverpool’s blushes in Europe.

Heading into their final Champions League group stage match against Napoli on home soil, the Reds knew that only a 1-0 win or victory by two clear goals would secure progression into the knockout rounds.

Salah fired the hosts ahead in the first half. The Serie A outfit showed little attacking threat – that was until stoppage time.

Arkadiusz Milik found himself one-on-one. It looked certain that the forward would equalise and send the Premier League side crashing out of Europe’s elite competition. But Alisson produced a wonderful stop with his feet to earn his team a spot in the last 16.

“If I knew Alisson was this good, I would have paid double,” Klopp said after the game. “The save Ali made, I have no words for that.”

Liverpool went on to lift their sixth European Cup that season. This intervention from their reliable keeper is one of the main reasons why.

One of the biggest moments on the run to Madrid pic.twitter.com/96yx2JjqaI

In the Carabao Cup final win Liverpool enjoyed over Chelsea in February 2022, Caoimhin Kelleher was the penalty shootout hero for Klopp’s side.

But in the FA Cup trophy-winning triumph against Thomas Tuchel’s troops at Wembley three months later, Alisson was the hero of the hour – alongside Kostas Tsimikas – for the Reds.

The two sides played out a goalless draw after 120 minutes. The lottery of a shootout was needed once again for Liverpool to earn their second trophy of the 2021-22 campaign.

In sudden death, Alisson produced a brilliant save to deny Mason Mount from the spot to allow Tsimikas to step up and win the game.

“He [Alisson] made vital saves and then there was the way he was coming for the crosses. And then making the save from the penalty to carry us through. An unbelievable performance,” Liverpool’s goalkeeper coach John Achterberg said.

The #EmiratesFACup is live now on Paramount+ pic.twitter.com/0b32G3rBRb

It’s hard to argue against this moment in the 2020-21 season being top of the list. This goal in April 2021 was one of few memorable moments we witnessed during the often-turgid football we endured behind closed doors.

It had been a turbulent campaign for Klopp’s side in empty stadia. Hopes of Champions League qualification looked seemingly impossible as the Reds were drawing 1-1 with West Brom at the Hawthorns with a minute to play.

That all changed when Trent Alexander-Arnold stood over a corner and Alisson jogged forward into the box. The one-last-roll-of-the -dice tactic that never usually works did so perfectly on this occasion.

The delivery found the head of Liverpool’s ‘keeper. He nodded home into the bottom corner nonchalantly and his side went on to clinch Champions League football for 2021-22.

“I’m too emotional, this last month for everything that has happened with me and my family, but football is my life, I played since I can remember with my father,” Alisson said in a heartfelt post match interview, referring to his father’s tragic death in February 2022.

“I hope he was here to see it, I’m sure he is celebrating with God at his side.”

They would have been playing in the Europa League if it wasn’t for Alisson’s Shearer-esque finish.

READ NEXT: The 15 Liverpool players Klopp has sold for £10m+ and how they’ve fared

TRY A QUIZ: Can you name every player to wear No. 9 for Liverpool in the PL?