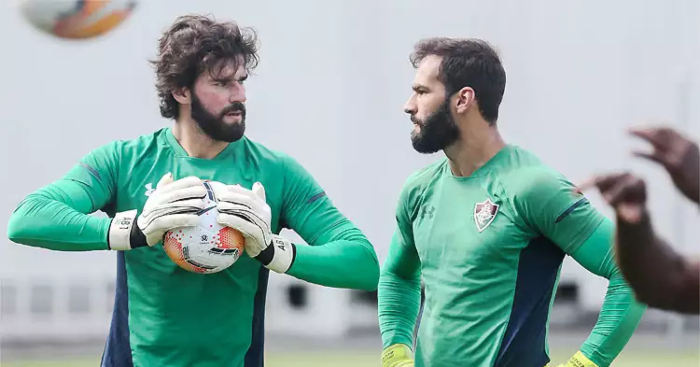 Muriel Becker’s footballing achievements may be overshadowed by his younger brother Alisson’s feats for Liverpool, but the fellow goalkeeper lived up to his family name by helping Fluminense beat Flamengo on penalties to win the Taca Rio.

“When I entered my teens, I wasn’t even the best goalkeeper in my family,” Alisson told The Players Tribune in 2018. “Muriel was also a goalie, and man, he loved to push my buttons.

“He knew exactly what he had to do to make me lose my temper. I think all big brothers have this talent. But in a way, he also helped me learn how to control my emotions. He’s the most important person in my story.”

Alisson added: “For everything I have accomplished, I have to thank my brother.”

The Liverpool stopper was speaking ahead of his appearance at the 2018 World Cup for Brazil, but while Muriel has failed to reach such heights throughout his career, the 33-year-old was at the centre of Fluminense’s triumph this week.

Fluminense faced a tough challenge in Copa Libertadores champions Flamengo, who had yet to concede a goal since football’s restart and had Gabriel Barbosa leading the attack.

Gilberto did manage to score past Flamengo in the first half, only for substitute Pedro to come off the bench to equalise with 13 minutes to go to send the game to penalties.

Flamengo stopper Diego Alves managed to keep out two of Fluminense’s spot-kicks in a wonderfully tense shootout that saw both sets of players exchange words throughout.

After Muriel saved an early penalty, Flamengo later put one wide, and the keeper stepped up to save the final attempt from former Bayern right-back Rafinha, with Fluminense’s players clearly enjoying putting one over their rivals in scenes reminiscent to John Stones and Harry Maguire’s reaction to England’s victory over Colombia. (The whole shootout is well worth a watch for some top shithousery.)

It just so happens that Flamengo were the winners of the first stage, meaning we get the treat of the two teams facing a rematch to decide Rio’s top dog.

We really hope it goes to penalties again. Over to you, Muriel.