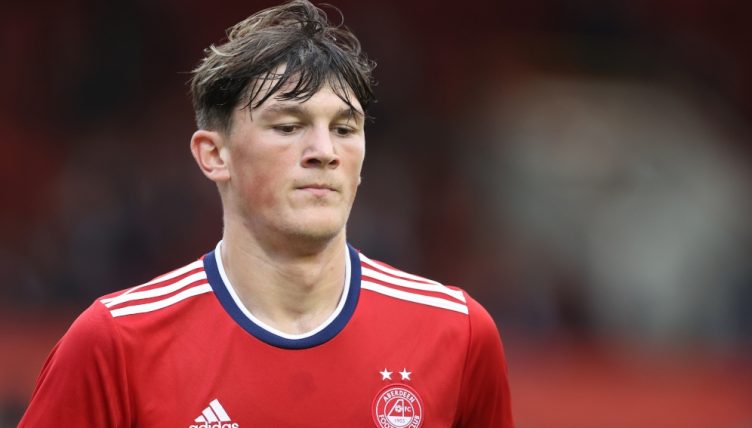 Liverpool have had some famous Scottish players down the years and Calvin Ramsay looks set to be their next signing from north of Hadrian’s Wall.

Ramsay has been catching the eye since making his breakthrough into the Aberdeen first team and Jurgen Klopp’s Reds were one of a host of Premier League clubs to have scouted him this season.

Manchester United, Leeds and Tottenham were all linked, but it appears as though Liverpool have won the race. According to well-sourced Times journalist Paul Joyce, an initial £4million fee has been agreed with Aberdeen – and Ramsay will be their final signing of the summer 2022 window.

We’ve compiled everything you need to know about the 18-year-old defender.

Ramsay broke onto the scene in Scottish football towards the end of 2020-21, when the defender was given a handful of starts in the Scottish Premiership split and in Aberdeen’s run to the Scottish Cup quarter-finals.

After making six appearances under caretaker manager Paul Sheerin, Ramsay was integrated into the first-team of his boyhood club under Stephen Glass.

And he’s been an ever-present member of the Dons starting XI in European qualifiers and the Premiership since – and is fast establishing himself as one of Europe’s best teenager defenders.

The 18-year-old notched up nine assists in 2021-22 – the most of any teenage defender in world football. The only teenagers, in any position, to record more last season were Florian Wirtz, Adam Hlozek and Jude Bellingham.

According to the Daily Record, Liverpool’s rivals Manchester United were monitoring Ramsay since he broke into the first team at Pittodrie and had scouts watch the player on a number of occasions.

Liverpool were also among the likes of Leicester, Southampton, Tottenham and Leeds United in scouting the youngster, while back in the winter window Bologna reportedly saw a £3.5million bid knocked back by Aberdeen.

Check out this assist from Calvin Ramsay in GW1! 👏 #FFScotland pic.twitter.com/skI9gOoZc0

Whether playing for club or country, Ramsay has always been a right-sided full-back who can play as a wing-back in certain tactical systems.

The young full-back thrives when given space to run into with and without the ball, which is shown in his impressive assist tally.

Whether as a full-back or a more advanced wing-back, Ramsay has enough energy and persistence to trouble most teams – and it’s possible to see why Klopp would be interested in someone with Ramsay’s dynamism.

He looks comfortable on the ball and is strong with both feet, offering the potential for versatility that Premier League managers crave. Ramsay is currently Aberdeen’s corner taker and regularly takes free-kicks too.

Only six players in the Scottish Premiership produced more key passes per game than Ramsay, who led the league in the statistic before his injury. He also ranks sixth for crosses per game.

While the youngster is still vulnerable to crosses from the back post, there is clearly enough potential there to justify the interest shown in him.

Ramsay also scored his first senior goal in the penultimate week of the campaign, lasering in a near-post finish in a 2-2 draw with Dundee.

– “Would I expect offers? I wouldn’t be surprised, let’s be honest about that,” Aberdeen boss Stephen Glass said ahead of a game against Celtic.

“I’m not surprised Calvin is getting attention because he’s been brilliant since he came in. It’s no surprise to me that people are looking as Calvin fits the profile for what a lot of English clubs are looking for.

“He is in a similar position to a lot of young players in Scotland. Scottish players are an attractive proposition for clubs south of the border with all the money and finance they have.”

– “He has a nice family and is a lovely kid. He looks after himself and keeps his feet on the ground,” Aberdeen chairman Dave Cormack said.

“There are not many right back at his age like him, doing what he does. Look at the data and all the clubs look at the same [scouting] systems. He is in the elite upper bracket, right up there, for a young right-back in Europe.”

– “Still only 18, he is a very confident boy and I like the way he plays like a winger in the opposition half,” former Dons manager Derek McInnes wrote in The Scotsman with reference to Ramsay.

“His quality of delivery from set-pieces and open play has brought him plenty of assists for Aberdeen. For someone so young to come in and make the impact he has is a great credit to him.

“We had earmarked this season as his turn to make the breakthrough and he has taken these opportunities brilliantly.”