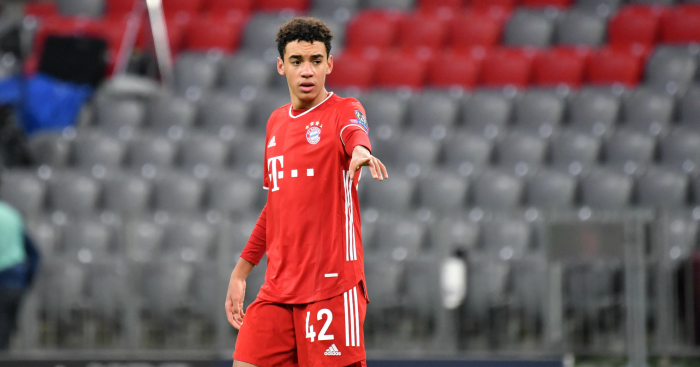 Having been on the books at Chelsea until the age of 16, Jamal Musiala is the latest English prospect to make an impression in the Bundesliga – and he’s already reportedly caught the eye of Liverpool and Manchester United.

Musiala moved to Bayern Munich in 2019 and has impressed the coaches and players at the home of the European champions.

As Bayern line up a new contract for the 17-year-old to ward off Premier Leauge clubs, we’ve collected everything you need to know about the young midfielder.

Musiala spent his formative years at the Chelsea academy that plays the role of Pied Piper to all young footballers in the Greater London area.

Without playing a game for the Blues, Musiala joined Bayern Munich in the summer of 2019. In the disrupted season that followed, Musiala developed and was given his chance in the all-dominant Bayern first team.

The records have tumbled from there. Over the past few months, Musiala has become the youngest Bayern player in Bundesliga history (against Freiberg, June 2020), Bayern’s youngest goalscorer aged 17 years and 205 days (against Schalke, September 2020) and made his Champions League debut against Atletico Madrid in December of the same year.

With a Nigerian father and a German mother, Musiala is eligible for both countries but has chosen to represent England. He made his Under-21 bow against Andorra in November 2020 at Molineux and scored his first international goal against Albania a few days later.

Musiala looks like another England star in the making 🤩pic.twitter.com/0YdTjkHjZW

The attacking midfielder has been compared to Dele Alli, ghost past opponents with a tall and wiry frame. But Musiala has spoken of his desire to put on muscle mass – we suggest he has a word with Leon Goretzka, if he can see past the midfielder’s biceps.

He prefers playing as a No.10 behind the striker but can play anywhere across the midfield.

Against Atletico in the Champions League, Muisala put in a complete midfield performance. As noted by Sid Lowe in The Guardian: ‘He completed 92% of his passes, but not because he limited himself to the risk-free option. The tackles he made were vital ones, too: long runs and well-timed interventions to make vital stops on Yannick Carrasco, Kieran Trippier and Marcos Llorente.’

This boy looks to be the full package who, if developed, could prove to be integral to both club and country in the future.

– Speaking to DW,  Whitgift School director of football Andrew Martin said: “Even though he’s playing for Bayern Munich, he still calls me sir. That just tells you everything you need to know about the lad.

“I was fortunate enough to coach Jamal for the three years he was at Whitgift. When he first arrived, he was a small and slight lad and someone who didn’t strike you as having great amounts of confidence. But as soon as you put him on a football pitch he comes alive.

“Technically outstanding, very skilful, and a player who can score all types of goals, inside and outside the box. And he’s a great dribbler and likes to take players on. He later became a No.10 and has become as much of a creator as a goalscorer.

“He’s so polite, so respectful, and I just wanted him to know that we’re all watching his career with interest and we’re all so proud of him. I’m convinced he will go on to score hundreds of goals in his career, whether that’s at Bayern Munich or elsewhere.”

– Speaking after Musiala scored twice in a 2-0 win over Zwickau at the start of June, reserve-team coach Sebastian Hoeness said: “The boy is ice cold. If you talk to him before the game, he appears focused, calm and reserved.”

– His first-team manager, Hansi Flick, has also showered praise on the starlet: “Everyone can see that he has enormous quality on the ball. He’s very confident and cheeky. But he needs to improve his physical robustness and still has a long way to go. He’s currently ahead of our other youth players.

“He has to keep going. It’s a lifelong learning process. I trust him to take the next step with the support of the top players.”

– Upon joining Bayern, Musiala said: “I’m really happy about the years in England. There were a few interested parties in Europe. But if such a big club is interested in Germany, you can’t say no. And I loved Bavaria from an early age.”

– Speaking about an infamous incident in training, he told Bayern’s official website: “I got nutmegged by him (Hansi Flick) in training. That hurt.”

We’re sure he’ll have his chance for revenge over the coming years.