All you need to know about Dusan Vlahovic, Liverpool’s Haaland back-up 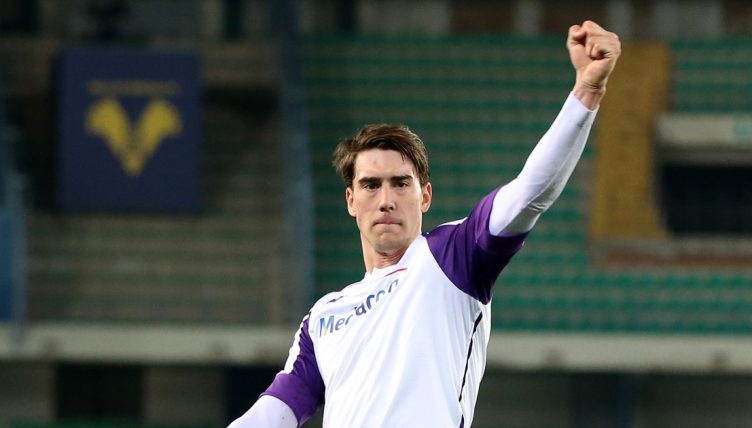 Fiorentina’s Dusan Vlahovic is quickly catching the eye as one to watch this summer, with Liverpool said to be keeping tabs on the forward amid competition from Arsenal and Manchester United.

Erling Haaland is the name set to dominate the gossip columns, but only one club will be able to afford the prolific Borussia Dortmund youngster, leaving their competitors searching for alternatives.

Vlahovic certainly fits the bill in that regard. Here’s everything you need to know about a goalscorer you’re going to hear a lot more about in the coming weeks and months.

The 21-year-old was born in Belgrade and spent a lot of his time at playing football with the older kids at school, eventually before spending time in the youth teams of OFK Beograd, Red Star Belgrade and Partizan Belgrade.

It was the latter with whom he progressed the most, signing professional terms with The Steamroller in 2014 after just one year in the set-up. In 2016, he became part of the first-team set-up under Ivan Tomic, even being handed the number nine shirt.

In February of the same year, he made his debut against former club Beograd, becoming Partizan’s youngest ever player in the process and when he scored his first goal in April, became their youngest goalscorer as well.

Later that year he scored in the national cup final against Javor Ivanjica and lifted his first piece of silverware.

In June 2017, he signed a pre-contract agreement with Fiorentina, moving to Italy in February 2018. Due to the nature of the deal, however, he was unable to play until July.

The following season saw the now 18-year-old make 10 first-team appearances, but he ultimately failed to find the net. He did not get despondent, however, and found the net six times in the 2019-20 campaign, notably scoring a brace against Monza and a hat-trick against Benevento. Even testing positive for COVID-19 couldn’t slow him down.

This season has seen his upward trajectory continue even further, scoring 16 times in 31 league games already, despite Fiorentina’s unimpressive campaign. Only seven players in Europe’s top five leagues have scored more goals in 2021 so far.

2020 also saw him make his senior debut for the Serbian national team, scoring twice in seven appearances so far, although he will have to follow Euro 2020 online after Serbia failed to qualify for the tournament.

Standing at 6’2″ it would be easy to dismiss Vlahovic as a typical target man, but he is so much more than that.

Just like Haaland, he is capable of dominating near enough any centre-back he comes up against, but he is more than capable of picking up a pass in midfield, dribbling 20-yards before finishing clinically (as seen above). His tally this season is second only to the Norwegian’s when it comes to players under 22 in Europe’s top-five leagues.

In December he demonstrated intelligence way beyond his years when the Viola clashed with Juventus, drifting between Matthijs de Ligt and Leonardo Bonucci before scooping the ball expertly over an onrushing Wojciech Szczesny.

But his ability in the air is also extremely useful. He has been involved in 206 aerial duels in Serie A so far this season, the second-most of any player, although only one of his 16 Serie A goals have come from his head.

His physique may also lead you to believe that he has been deployed as a loan striker in Italy, but nearly all of his matches have started with either Frank Ribery either alongside or just behind him.

– “He’s certainly motivated, I practically have to push him off the pitch, as he would like to stay there for hours. I think it’s the kind of pressure he can deal with,” his former manager Cesare Prandelli said after the striker scored a hat-trick against Benevento in March.

– “He is only 21 years old and he behaves as if he were 30, which is very positive, it opens the way for him to have a phenomenal career, of which I am convinced and which will be very important in the game of our national team,” Serbia boss Dragan Stojkovic said.

– “He said he was the new Zlatan Ibrahimovic. I told Corvino to sign Vlahovic when he was 15 or 16. Vlahovic was crazy, really crazy. He used to tell me: ‘I am a Zlatan Ibrahimovic from Belgrade, I will play for the strongest clubs.’ I liked his arrogance. I thought he would become a strong player, while Milenkovic was calmer,” said Vlahovic’s ex-Partizan Belgrade team-mate Valeri Bojinov.

You need to find someone to look at you in the same way that i look at Zlatan 🍼 @Ibra_official Dream pic.twitter.com/x7wJraZsC6

– “He is a great coach, a master. When you have a coach like that, it’s normal to give your all on the pitch,” Vlahovic told the Gazzetta dello Sport about manager Giuseppe Iachini.

– “When I was down, he spoke to me and told me to never give up. That’s how I understood what it means to be a champion on the pitch and in life,” he said of Franck Ribery, after the Frenchman gave him some advice during a bad spell of form.

– “I’ve said many times that I cannot describe with words what I owe to Prandelli. He arrived when I was in a bad period of form, he gave me confidence and I must repay his faith in me,” he said about former manager Cesare Prandelli after a 3-0 win against Spezia.