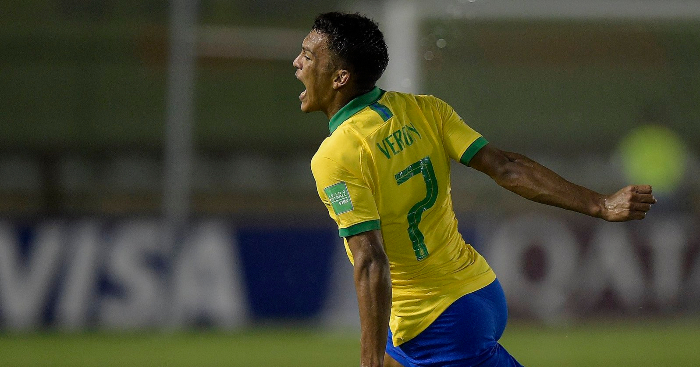 Despite currently being top of the Premier League, Manchester United still want to strengthen their squad and are reportedly targeting Palmeiras’ Gabriel Veron.

According to Sport, United are currently in pole position to sign Veron, who reportedly has a £53million release clause in his contract.

Manchester City, Juventus, Barcelona and Real Madrid are all thought to also have an eye on him and we’ve brought you the lowdown on the talented teenager.

Veron was born in the north of Brazil, in the municipality of Assu. He was named after Juan Sebastian Veron but initially wanted to follow in his father’s footsteps and become a cowboy.

His mother encouraged him to pursue a career in football, and he started playing for local non-league side Santa Cruz de Natal.

The forward was snapped up by Palmeiras in 2017 and scored nine goals in the Under-17 Club World Cup in 2018, including one in the 4-2 win over Real Madrid in the final.

He also helped Brazil win the 2019 FIFA Under-17 World Cup and was awarded the Golden Ball after scoring three goals in the tournament.

The 18-year-old moved into Palmeiras’ senior squad in 2019 and has since registered 10 goals and five assists in 34 first-team appearances, playing alongside the likes of Felipe Melo and Luiz Adriano.

After scoring in a 5-0 win over Tigre in October 2020, he became the youngest Palmeiras player to ever score in a Copa Libertadores match.

Nicknamed “Bolt” by his team-mates, Veron is very much a forward who uses his low centre of gravity and acceleration to terrorise defenders, popping up anywhere along the front line and fearlessly taking on opponents.

A glance at his highlight real shows him thundering home acrobatic volleys, breezing past full-backs and regularly picking the right pass when a team-mate finds himself in space.

His quick feet frequently get him out of tight spots as well. He regularly finds himself faced with two opponents in the middle of the park, but with a quick flick, he is free and running at the defence again.

The forward primarily plays on the right-wing, a position where United have struggled in recent seasons, so there is no doubt that he could have an immediate impact at Old Trafford.

– “Beating my marker is my job and I get a lot of joy from it,” Veron told The Athletic in 2019. “I’m always looking to go at my man, to dribble past him, to make things happen. I like those individual battles.”

– He (Cristiano Ronaldo) always seeks to do his best and beat his own records,” Veron told Globo Esporte in 2019.” I think so (on having similar styles). Of strength, always looking for the best, scoring goals.”

– “I like my name and will honour it just like he did. I saw appearances of him on YouTube, but never saw him live. He was a very good player,” he said on Juan Sebastian Veron. “I think, he would be proud of me. I believe I could do our name proud.”

– “That’s my father’s profession – he’s a ranch hand who takes care of cattle and horses,” Veron told FIFA.com in 2019.

“He works in the countryside, and I tried to do the job alongside him, but just couldn’t. Fortunately, my mother kept encouraging me to pursue a career in football to try to have a better future. So, I dedicated myself to being a footballer.”

– “He’s a kid with enormous talent,” former Brazi striker Bebeto told Correio Brasiliense in 2019. “I looked for more information about him and I was impressed once I saw him wearing the No.7 producing beautiful plays.

“I watched him score a goal dribbling from almost his own half before finding the net with a quality finish, calmly beating the opposition goalkeeper.”

– “It is impossible for Palmeiras to sell this player for less than Neymar was sold to Barcelona,” Palmeiras manager Abel Ferreira said.

– “He’s a boy with loads of quality, so it’s up to us to slowly give him space to play in the first team,” Andrey Lopes, former Palmeiras’ caretaker manager, said. “I’m sure he’ll provide much joy to our fans.”

– “He has a great relationship with the ball, but that’s only part of it,” Palmeiras Under-17 coach Artur Itiro told The Athletic in 2019. “He is also able to keep control at high speed. You don’t see many players who are able to marry those two characteristics, even at senior level.

“There are plenty of quick, explosive wide players, but Gabriel also has great balance and a vast repertoire of tricks. He can flick the ball over a defender’s head, do eye-catching things like that.

“He is a player who unbalances opponents, and he can do it on both wings. On the left, he cuts in and drives towards the box; on the right he likes to reach the byline.

“And we have even been using him as a No 10 recently, trying to make the most of his dribbling skills in the tight spaces around the penalty area. That shows that his game is not just about speed.”