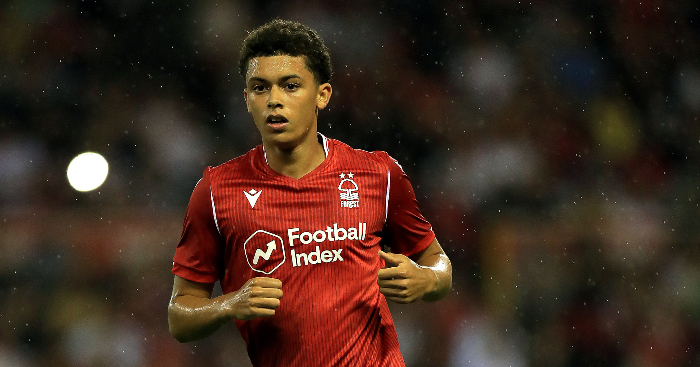 It’s been an incredibly quiet January transfer window in the Premier League, but one name to have emerged as a potential target is Nottingham Forest youngster Brennan Johnson.

The Athletic report that Burnley and Brentford are both interested in his signature, while Leeds United have also been tracking his progress this season.

But who is he, and is he good enough to make the step-up? Here’s everything you need to know about Johnson.

Brennan Johnson comes from good stock as the son of David Johnson, who won the FA Cup Youth Cup winner with Manchester United, represented Jamaica at international level and was a Nottingham Forest stalwart himself.

Born in Nottingham in 2001, not long after his father had first signed for Forest, Brennan joined the club’s academy as a child and was eventually given his debut as an 18-year-old by Sabri Lamouchi in 2019.

It wasn’t long until Johnson was handed his first start, a memorable 3-0 League Cup victory over old rivals Derby, and he was given further starts in cup defeats to Arsenal and Chelsea.

But he only played a peripheral role in Forest’s league campaign, making just four appearances as they dramatically missed out on the play-offs, and has had to go out on loan for more regular opportunities this year.

That’s proved to be a smart move, as Johnson has become a key player for Michael Appleton’s promotion-chasing Lincoln City in League One.

He doesn’t turn 20 until May but has been starting week in week out in the third tier and catching the eye while doing so. In November, he made his senior Wales debut in a 0-0 draw with the USA.

We'll celebrate with his hat-trick for #NFFC Under 23s at Ipswich last month. pic.twitter.com/1J3kAFS6oE

Right-footed, the immediately striking thing about Johnson is his close control and technical ability with the ball at his feet.

Keen to take players on, he averages 1.9 successful dribbles per game for Lincoln in League One this season. Only Peterborough’s Siriki Dembele has registered more in the entire division.

Appleton has used the 19-year-old in various roles across the forward line this season, including a couple of opportunities as a central striker and deeper in midfield, but he has predominantly played as a winger out on the left for Lincoln.

He was on the left of a front three in his two most devastatingly effective performances back in December. Having set up fellow wide attacker Anthony Scully in the second minute of a 4-0 win over Northampton, he got himself on the scoresheet twice late on.

A week later, he repeated the trick with another two goals and an assist on Boxing Day, in which Burton couldn’t cope with him in a 5-1 defeat at Sincil Bank.

Look at this lovely first touch from Brennan Johnson in the build-up to his goal in the FA Cup on Saturday. pic.twitter.com/SqvBHFqIwB

– “He is under 18 and is just an unbelievable player with the right mentality,” Lamouchi told reporters after Johnson impressed in the big cup win over Derby.

“I said to him, like I say to all the players, ‘I don’t care about the age or the name.’ He deserved to play. And for me, it was the right choice, without any doubt.”

– The French coach has since been sacked and replaced by Chris Hughton, with Forest struggling at the wrong end of the table. The new boss hasn’t had a chance to work with Johnson yet, but he’s keeping an eye on his progress at Lincoln and refuted the idea of recalling him early.

“First and foremost, I have a responsibility to the team to try to get the points that we need to start climbing the table,” Hughton told Nottinghamshire Live.

“But I also have a responsibility to the club and to development. And at this moment, my thinking has been that, fortunately for Brennan, he’s at a club where he’s playing regularly.”

The man himself is perfectly happy where he is for now, and seems satisfied to continuing developing his game with Appleton’s Imps.

“Obviously, it’s out of my hands but I’m enjoying my time here and I couldn’t be more grateful to the staff who have given me this chance. I’m loving it so far,” Johnson told the Nottingham Post.