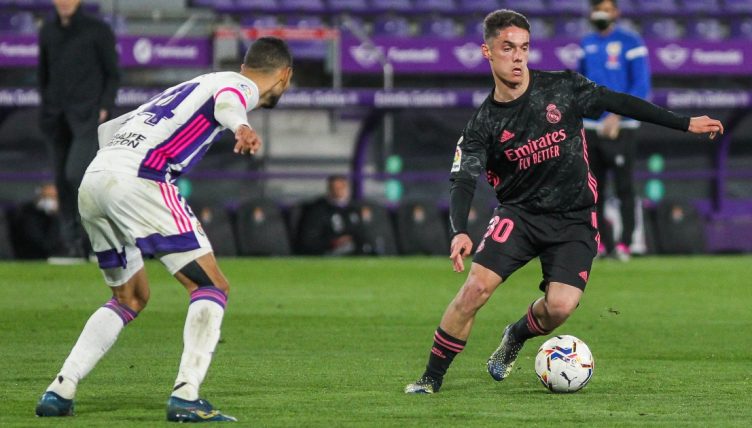 Arribas has caught the eye with some brief cameo appearances for Zinedine Zidane’s first team this season, and those that know the club and player expect plenty more opportunities to come his way.

Here’s everything you need to know the 19-year-old rising star.

Born and raised in the Spanish capital, Arribas was born in September 2001 – when Can’t Get You Out Of My Head by Kylie Minogue was top of the UK singles chart – and developed his skills as a child with local side Perez Galdos before joining Leganes and eventually Madrid’s Fabrica in 2012.

Chatter around the starlet starting to get louder during the 2019-20 UEFA Youth League campaign, in which Arribas played a prominent role as Madrid won the trophy, led in the latter stages by club legend Raul.

He featured as Raul’s youngster’s beat Benfica 3-2 in the final to cap off a stellar individual campaign with the Juvenil side, registering 18 goals and 13 assists in 34 appearances.

Having turned 19 shortly after the delayed 2020-21 season kicked off, Arribas has enjoyed something of a breakthrough campaign, shining for Los Blancos’ Castilla (the reserves) down in the Spanish Segunda B, earning a handful of cameo appearances for Zidane’s first-team.

The midfielder has been one of the B team’s standout players this season, starting 10 of their 16 games, maintaining his prolific rate of goals and assists at a higher level.

After scoring a penalty in a low-key pre-season friendly against Getafe, Arribas made his La Liga debut in Madrid’s opening fixture of the 2020-21 campaign, coming on as a 91st-minute substitute for Vinicius Junior in injury-time.

A further six substitute appearances have followed between the league and Champions League.

Left-footed, Arribas is a technically skilful player that has the skillset to operate in the midfield or an inside forward.

Blessed with a low centre of gravity and the first touch of a feather, the youngster is a proficient dribbler with a considerable turn of pace and acceleration speed.

Calm in possession, he’s demonstrated the vision to find his team-mates in dangerous areas time and again between the Juvenil and Castilla sides at Madrid, and it appears only a matter of time before he’s demonstrating that link-up play with the likes of Karim Benzema and Eden Hazard.

3 goals and 6 assists this season. pic.twitter.com/sxa6aUtEZ4

“He is a very precise player, you could tell he was very skilful, with that low centre of gravity that can remind you of the Isco or that type of player,” said his former Juvenil coach Dani Poyatos (via Fabrica Madrid).

“And on a football level, being more of a midfielder than a finisher, he showed a precision that attracted a lot of attention, without being the centre forward.

“He understands second moves, second actions, very well. He is very intuitive, in what action or what second move there will be.”

“He’s a number 10, an attacking midfielder who plays on the inside, very smart. He is very well positioned, he knows how to take advantage of his fine left foot and he is quite technical,” said fellow youth coach Alvaro Benito.

“He’s very good in front of the goal, he has always scored many goals. He is a boy with a lot of personality, daring, not at all inhibited. In the right context, he can progress very well in professional football in teams that match his qualities.”