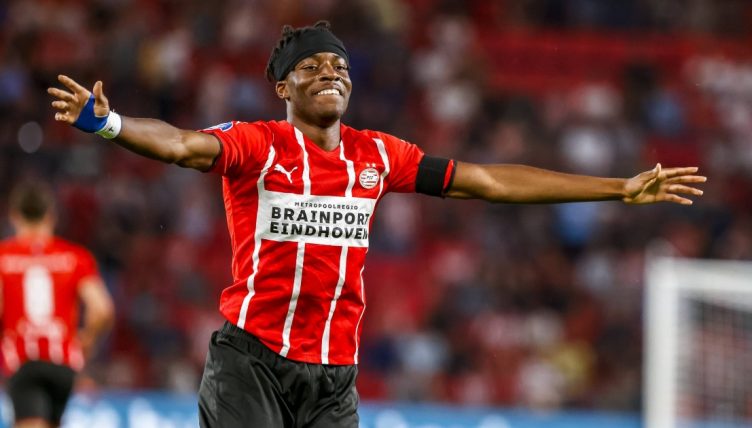 Noni Madueke has been tearing it up in the Eredivisie and has attracted the attentions of Manchester United and Tottenham – but what do we know about the PSV Eindhoven winger?

Madueke enjoyed a breakout season in Dutch football last year, registering seven goals in 24 league appearances. With speed to burn and enviable creativity, it’s hardly surprising that he’s has caught the eye of some of English football’s biggest names.

We’ve brought you the lowdown on the 19-year-old who could move to the Premier League this summer.

Madueke was born in Barnet, a London suburb, in March 2002. He is of Igbo descent – a group of people based largely in Nigeria and other West African countries.

He began his playing career at Tottenham Hotspur, where he captained their U16 side and made his debut for the U18s at the age of 15. However, Madueke considered the pathway to the first team in north London tough, despite being highly thought of by Mauricio Pochettino, and decided to leave the club to experience more senior football.

The winger signed for PSV Eindhoven in June 2018, rejecting an offer from Manchester United, and the 16-year-old relocated to the Netherlands with his mother.

After enjoying a breakthrough 2020-21 campaign, teenager Madueke has begun this season in blistering form, scoring five times in seven games and also setting up another goal for PSV.

Considering the legendary Ruud van Nistelrooy has taken him under his wing and given him extensive lessons in finishing, this explosion of form is perhaps not surprising.

A host of scouts from Premier League clubs, including Leicester, Spurs, United and Wolves, watched the winger face Benfica in last week’s Champions League play-off as well as staff from European giants Bayern Munich and Juventus.

Madueke has also represented England at every level from Under-16 to Under-21 and seems destined to have a bright future in the game.

The England youth international wasn’t always a winger. That’s where Madueke has made his name this season but when he arrived in Holland, he was a central attacking midfielder or No.10.

Capable of playing on either of the wings and in the hole behind the striker, the young Englishman predominantly plays on the right flank for PSV.

A physically strong and creative playmaker, Madueke possesses an excellent left foot that allows him to execute killer through balls and a powerful shot from distance.

Madueke’s style of play has drawn comparisons with Arjen Robben – another left-footed winger who would cut in from the right. This label may seem hyperbolic, but PSV’s current star can back that up.

Capable of beating defenders in a one-on-one, Madueke is blessed with sublime vision that can open up defences. Combined with a killer instinct and no little flair, the parallels with Robben suddenly make sense.

“I am developing well, but I can still improve in enough areas. I demand a high standard of myself. But so far it is going well.” – interview with ESPN, January 2021.

“Ruud helped me a lot last year, taking my game to the next level and now I am just trying to get better every day. I have always scored nice goals but I know I needed to score easier ones — being in the right place at the right time — striker-type finishes. Ruud has been teaching me how to get into those positions more and, being a Manchester United fan, I know he is the master of that.” – speaking to The Sun about working with Van Nistelrooy, August 2021.

“If I’m winning games with my club, if I could be at the World Cup in 15 months, it would be great.” – when asked by The Sun about his prospects of playing for England at Qatar 2022.

“Madueke can really become very good. He is a very special player. His qualities resemble Kylian Mbappe – drive, speed and scoring ability. The top clubs are all crazy about him.” – former PSV and Netherlands international Gerald Vanenburg.

“He is able to read situations, get to the right positions and be in the right place. He has a good sense of that, with his timing, and, technically, he has the skills when one-on-one.” – PSV manager Roger Schmidt.