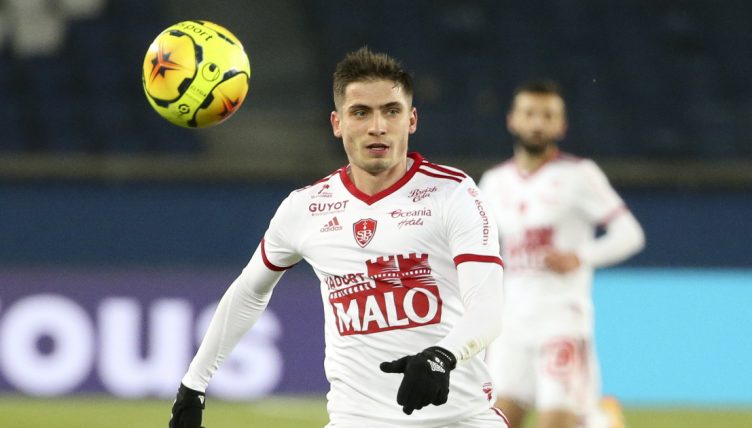 Leeds United allowed the January transfer window to pass without doing any business, but according to reports they’re already targeting Stade Brest’s Romain Perraud for the summer.

French outlet Le10Sport suggest that Leeds are keen on the left-back’s signature. Given how Raphinha has hit the ground running, it’s safe to say director of football Victor Orta knows his stuff when scouting Ligue 1 talent.

While Ezgjan Alioski and Stuart Dallas have adapted to the role admirably, there’s an argument that left-back has been a problem position at Leeds, with no top-quality specialised option there since Ian Harte, while some would stretch further back to standard-bearer Tony Dorigo.

Here’s all you need to know about the latest transfer target.

Born in the city of Toulouse in the south of France, he came up through the region’s local sides before joining Nice as a 16-year-old in 2014, developing his skills while the likes of Allan Saint-Maximin, Mario Balotelli and Jean-Michael Seri were at the club.

Graduating from Nice’s academy, he was handed his debut in December 2016 by Lucien Favre in a Europa League dead rubber against FC Krasnodar, the final group stage game in which they were already eliminated after losing four of the first five games.

He played all 90 minutes as the Russian club were reduced to 10 men and Nice came back to win 2-1, but further opportunities weren’t forthcoming.

His league minutes for the club amount to one four-minute substitute appearances before being loaned out to second-tier Paris FC for the 2018-19 season.

Perraud scored five goals from left-back during that loan stint as Paris missed out on promotion via the play-offs, but caught the eye enough to be named Ligue 2 Player Of The Season.

That was enough for Brest to sanction a move in the region of €2million to sign him from Nice in the summer of 2019, amid strong speculation of competition from Celtic.

Now twenty-three and into his second full season at Ligue 1 level, he’s established a reputation as one of the rising stars of French football, and a standout player in his position in the top flight. However, he’s unlikely to come cheap, having signed a new four-year contract extension at Brest taking him to 2025.

Watching a bit of Romain Perraud and this is one of his assists. Very nice cross but the finish from Cardona is absolutely ridiculous. What a goal. pic.twitter.com/Qtx1oQvK8p

It will be music to the ears of Marcelo Bielsa that Perraud is very much a modern, attack-minded full-back.

He’s ranked 12th in all of Ligue 1 for total distance carrying the ball with it at his feet in 2020-21 so far (via FBref.com), while to take a look at his highlights reel his crossing ability immediately stands out.

This season the left-back has registered five assists in Ligue 1, the most from any defender in the division, while he also ranks top in terms of defenders for shots on target.

The Brest defender is not quite Trent Alexander-Arnold – who registers more than twice as many accurate long passes per 90 minutes (5.3 to 2.2) – but he also has a penchant for searching diagonal balls, which could give Leeds another option for spreading the play behind the quarterbacking Kalvin Phillips.

“Indeed, Romain Perraud rapidly became a fan-favourite at the Stade Charlety, thanks to some Roberto Carlos-esque rockets from outside the box,” wrote Adrien Dryll in a 2019 profile of the player for GFFN.

“Keeping everything in perspective, Perraud’s style is, on some points, quite similar to the former Real Madrid full-back’s. He has a fighting mentality, an incredible shot power and a left-foot that has proven throughout the season to be a deadly weapon for set-pieces.”

“He’s starting to become one of the leading left-backs, seen by many people, as the best left-back or one of them in France’s top division,” The Athletic’s Phil Hay said, speaking on his podcast.

“It’s very clear from the performance data that he’s a very attacking left-back, who is good at creating chances, taking shots himself, a threat going forward, but also really good at employing the press, good as part of a team that likes to press aggressively. On those basic pointers, you can see why Leeds are interested.”

“Nowadays, football is more and more focused on statistics. Scoring helps, I can’t lie about that, because it means you are more in the spotlight. It’s a bit of a shame that defenders need to do that, but that’s modern football,” Perraud told Le Telegramme in September 2020.

“Maybe it makes us defenders add more in attack, even if that’s something that comes naturally to me. Stats help the confidence levels a lot, when it comes to taking initiatives and risks.”

“Staying in Ligue 1 is the priority. I don’t want to get ahead of myself and say ‘this is the season when I can make a major breakthrough,’ as I’m not like that. I’m not pretentious enough to say it’s my season. It’s about putting the team first.”

Where are they now? Leeds United’s last 17 January window signings