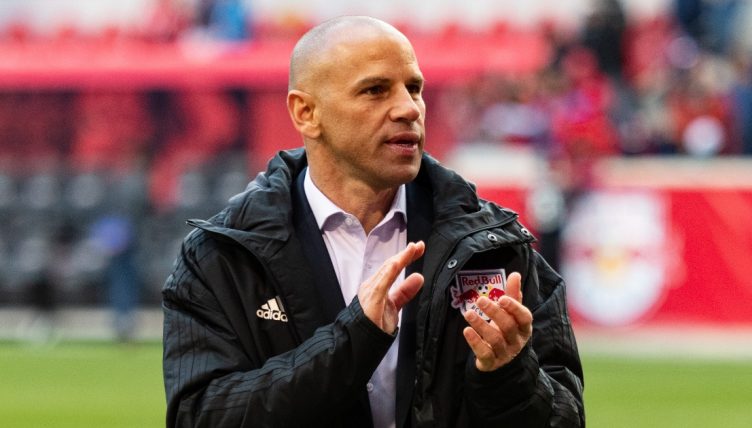 Armas will replace Michael Carrick, who worked alongside Ole Gunnar Solskjaer but decided to leave the club after taking charge of three games as caretaker manager.

We’ve brought you the lowdown on the newest member of their coaching staff.

Born in New York in 1972, Armas was a midfielder for the likes of LA Galaxy and Chicago Fire during a 13-year playing career.

After hanging up his boots in 2007, Armas briefly served as an assistant coach with Chicago Fire and then spent three years as the Adelphi Panthers women’s manager.

The American joined New York Red Bulls in 2015, where he first worked under Jesse Marsch before becoming the permanent manager in 2018.

During his first two years at New York Red Bulls, the franchise won the Supporters’ Shield for the best regular-season record but were eliminated in the opening round of the play-offs.

Armas was also introduced to Rangnick, who was promoted to head of sport and development for the Red Bull franchise in 2019.

The 49-year-old became Toronto manager in January 2021 but was sacked six months later, having won one and lost eight of his 11 league games in charge.

– “The first thing Jesse Marsch told me about bringing Chris in was that the guy’s a winner,” Dax McCarty told The Athletic. “(Chris) has an infectious positivity about him that’s just going to permeate throughout the club — and you know, Jesse wasn’t wrong.

“Chris’ role evolved throughout my time there as captain but, first and foremost, he was just a fantastic conduit between the players and the head coach. When Jesse and Chris came to Red Bull, they appreciated the nature and opinion of the players that had been at Red Bull for a while, and they wanted to incorporate our veteran corps’ opinions or feelings on basically everything that we did.

“That was one thing that Chris was really good at: Being that guy who could put his arm around you and get your honest opinion about what we were doing and what we were trying to accomplish.”

– “As a young guy, Chris was kind of like our point guy, like our go-to guy,” Alex Muyl told The Athletic. “He would do extra sessions with us whenever.

“He brought a lot of wisdom, and he was an unbelievable player in his time. He was still out there with us when I was coming up, and a fucking competitor.

“We’d play two-touch with him. He wants to win every time — technically, I’ve never beaten him because he’d just change the rules. If we were playing up to five, he’d say it’s best of seven or however many until he would pull ahead. He’s a winner, and as a young guy, he’s so supportive and he’ll give you a lot of love and wisdom.”

“The way I play is not without a style, of pressing, of taking time away, playing quickly and making it hard… I’m passionate, I care about people, I’m relentless with the details so I’m going to push and work tirelessly.”

“Being aggressive on the night gets us the goal from a pressing situation.”