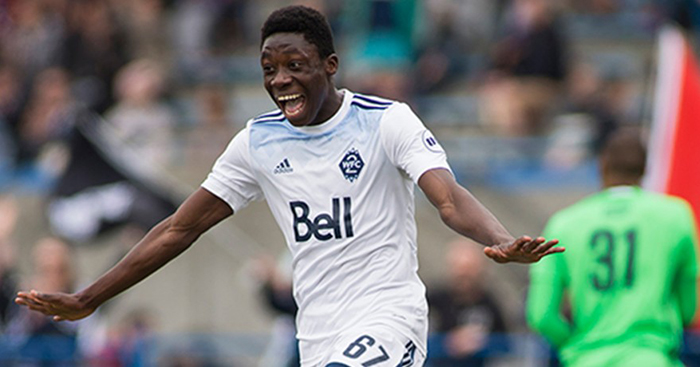 In July 2018, it was announced that Bayern Munich had signed Alphonso Davies for an initial $13million, making him the most expensive player ever bought from Major League Soccer. He is 17.

Davies, who turns 18 in November, will move to Germany from the Vancouver Whitecaps in January in a deal which could eventually be worth $22million.

The winger has become a sensation in North America, but having gone from refugee to record-breaker, it’s fair to say he hasn’t followed a typical path.

Davies was born in a refugee camp in Ghana, his parents among the 12,000 who fled Liberia during their home country’s second Civil War.

They moved to Ontario in Canada when Davies was five before settling in Edmonton, where the youngster began to play football, first for Edmonton Internationals and then Edmonton Strikers.

It was there where his talent was first spotted, leading him to joining Vancouver Whitecaps’ Residency program when he was 14.

The Residency is described as a “fully funded player development program designed to maximise a player’s potential on and off the field”, and it wasn’t long before Davies was standing out…

Davies was fast-tracked to the club’s second team, Whitecaps FC 2, in February 2016, becoming the youngest ever player to sign a United Soccer League (USL) contract at 15 years and 3 months old.

The winger made his professional debut just two months later and grabbed his first goal in May 2016, making him the youngest goalscorer in USL history.

He made such an impression, in fact, that after just four months with Whitecaps 2, in June he made his debut for Vancouver’s first team in the Canadian Championship.

A month later, he had signed a contract through to the end of the 2020 season, becoming the third youngest player in history to do so in MLS.

Davies soon became the second youngest player to make his debut and then start an MLS game, second only to Freddy Adu.

He scored his first goal in the CONCACAF Champions League in September 2016, and went on to play in every game he was available for in 2017, missing just six games through injury.

Making 33 appearances in 2017, Davies unsurprisingly started to attract the attention of a number of big English clubs as he was named by The Guardian as one of the 60 best young soccer talents in the world.,

In June 2017, Davies passed the Canadian citizenship test and, on the same day, was drafted into the senior squad.

He went on to play in a friendly against Curacao, becoming the youngest ever player to feature for the Canadian Men’s National Team (CMNT).

He had already been named Canada U17 Male Player of the Year twice before stepping up to the senior team.

The winger was named in the CMNT Gold Cup squad for the 2017 tournament, scoring three goals to win the Golden Boot and the Young Player of the Tournament award.

And his 2018 got even better when he was selected to play in the 2018 MLS All-Star game against Juventus.

European clubs came knocking again for Davies during the 2018 season, with Bayern Munich making the breakthrough in July.

Davies will move to Europe at the start of 2019, with performance-related bonuses possibly taking the deal to $22million, an MLS record.

Alphonso Davies (17) has completed more dribbles than any other player in MLS this season:

On average, Alphonso completes a dribble every 18 minutes. pic.twitter.com/irxADhzmaP