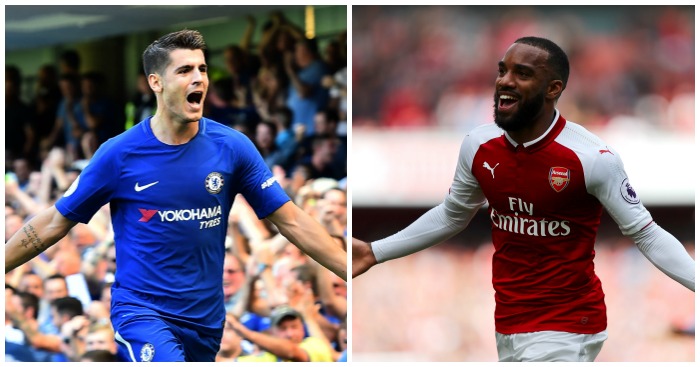 Chelsea host Arsenal on Sunday in what will be the latest installment of their heated rivalry – and both Alvaro Morata and Alexandre Lacazette will be hoping to make the difference.

The strikers arrived in the Premier League as record transfers for their clubs in the summer as Morata joined Chelsea from Real Madrid for £65million, while Lacazette moved from Lyon to Arsenal for £52million.

With the pair set to face each other this weekend, Oulala have taken a look at how both strikers have started in the Premier League for their new sides.

Morata has played seven more league minutes than Lacazette and has been far more productive so far, registering three goals and two assists compared to the Frenchman’s two strikes and no assists.

In fact, Morata has been directly involved in a goal or an assist, on average, every 55.6 minutes, whereas Lacazette has taken an average of 135.5 minutes to do the same. 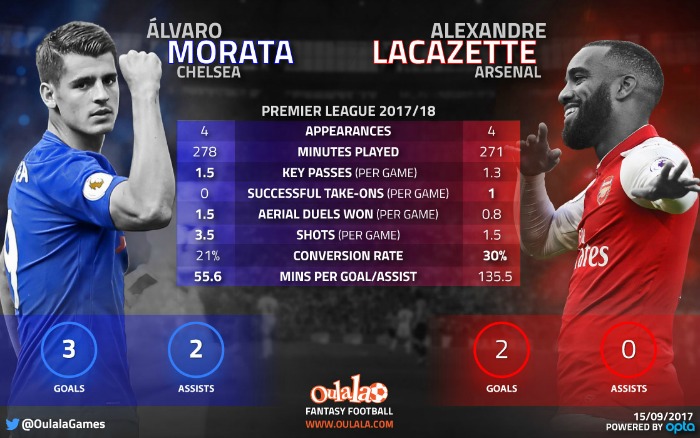 Lacazette, however, has attempted (and successfully completed) more dribbles (1 to 0) per match, while his passing accuracy also trumps Morata’s (81.3% to 78%) .

A lack of supply from his team-mates could be highlighted by Lacazette’s fewer shots, although he has been more clinical than Morata, converting 30% of his chances compared to 21% from the Chelsea striker.

With Chelsea and Arsenal spending well over £100 million on the forwards, Morata and Lacazette will be expected to provide the ammunition in what could be a goalfest.

Watch: Drogba explains why he always scored for Chelsea against Arsenal

Can you name every player to make 10+ PL apps last term for Arsenal – Chelsea?