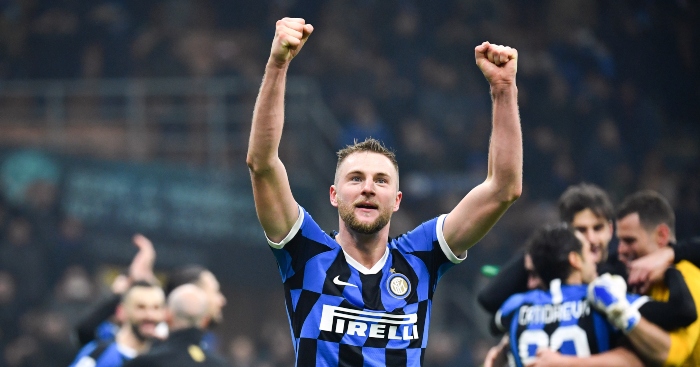 Jose Mourinho will be looking to mould the Tottenham squad in his image by signing some high-profile players this summer.

Spurs showed some promising signs under Mourinho, but they will undoubtedly want to strengthen as they look to get back into the top four.

We’ve rounded up an impressive XI of players Spurs have been linked with this summer, arranged in a 4-3-3 formation.

Goalkeeper does not seem like an area Spurs will be desperate to strengthen given they already have Hugo Lloris and Paulo Gazzaniga.

But Onana is regarded as one of the best young shot-stoppers in Europe after helping Ajax reach the Champions League semi-finals in 2019.

Spanish outlet Sport claim that Spurs are willing to challenge Chelsea for the Cameroon international, who is valued at around €40million.

After selling Kieran Trippier and Kyle Walker-Peters in the space of 12 months, right-back is an obvious area Spurs need to strengthen.

Aarons emerged as a highly sought-after prospect after impressing for Norwich City despite their relegation from the Premier League.

According to The Athletic, Jose Mourinho is keen on a move for the 20-year-old, but he has also been linked with Bundesliga champions Bayern Munich.

While we’re on the subject of Norwich defenders…

The Sun report that Spurs are weighing up a move for the defender, although the £50million asking price could be a potential stumbling block.

After watching them on Wednesday night, they'd suit us so well, would take them in a heartbeat.

Two u23 prospects who Spurs should target for the rebuild. pic.twitter.com/egkeFDms4g

Spurs look certain to sign a new central defender this summer after Jan Vertonghen left the club and joined Benfica on a free transfer.

Skriniar has fallen out of favour under Antonio Conte at Inter Milan and has been linked with a number of Premier League clubs in 2020.

Sky Sport Italia reported that Inter and Spurs are currently working on a swap deal involving Tanguy Ndombele and Skriniar.

A new left-back could be on the agenda for Jose Mourinho this summer, with Danny Rose facing an uncertain future at the club.

Spanish newspaper La Razon claimed that Spurs were looking to recruit Cucurella, who came through the Barcelona academy and had an excellent season on loan at Getafe.

But they may have to look elsewhere as 21-year-old has since joined Getafe on a permanent deal.

We can safely say that he’ll be playing for Spurs next season.

Ramsey spent 11 years at Arsenal before heading to Juventus in 2019, but he struggled to make an impact during his debut season in Turin.

The Daily Mirror claim that Spurs are among a clutch of Premier League clubs being offered the chance to sign the midfielder this summer.

We can safely say he won’t be playing for Spurs next season.

Spurs are yet to fill the void left by Christian Eriksen’s move to Inter Milan in January and Zaniolo has been heavily linked with the club over the last 12 months.

“He renewed [his contract] with Roma and is fine at Roma, but obviously we enjoyed the great interest of Tottenham, who were runners-up in the Champions League,” agent Claudio Vigorelli told the Daily Mai in September 2019.

“Their concrete interest in him shows how good the boy’s season was. Spurs thought a lot about Nicolo before taking Lo Celso, they focused their attention on him seriously – more than any other club even beyond the Premier League.”

He is regarded as one of Europe’s most exciting young talents and scored eight goals in 33 appearances in all competitions for Roma in 2019-20.

The Guardian report that Spurs are still tracking the midfielder, but he is not considered to be a priority for Jose Mourinho in this transfer window.

Bale left Spurs for Real Madrid in 2013 but has been frozen out by Zinedine Zidane and looks unlikely to ever play for the club again.

Spanish outlet Todofichajes claim that Spurs could offer Bale an escape route from his troubles in Spain by bringing him back to north London.

But he may have to reconsider those reported £600,000 a week wages if he wants to return to the club.

“Bale likes living in Madrid and he is going nowhere,” agent Jonathan Barnet told BBC Sport in July 2020. “He is still as good as anyone else in the team. It’s up to [Real Madrid manager] Zinedine Zidane.

“Of course there’s been interest but there’s hardly a club in the world which can afford him.”

[@SPORT] | Real Madrid are prepared to offload former Tottenham Hotspur player Gareth Bale for a fee in the region of just €17M this summer window.

Zinedine Zidane has made it clear Bale’s services are no longer required at the Spanish club.#THFC #COYSpic.twitter.com/r0VUBkAgUf

Spurs struggled during Harry Kane’s absence with injury in 2019-20 and they are reportedly open to signing a back-up striker in the summer.

They’ve been linked with Joshua King, Callum Wilson and Artem Dzyuba, but Milik is reportedly their preferred choice for the role.

According to Goal, Spurs are among those showing interest in the 26-year-old striker, who scored 11 goals in 26 Serie A appearances in 2019-20.

Jose Mourinho is a long-term admirer of Perisic and tried to sign the winger while he was in charge of Manchester United.

The 31-year-old spent the 2019-20 season on loan at Bayern Munich and parent club Inter Milan could be willing to sell him this summer.

FcIN report that Spurs have now spoken to the player’s agent regarding a transfer, but they are not willing to meet Inter’s €20million asking price.