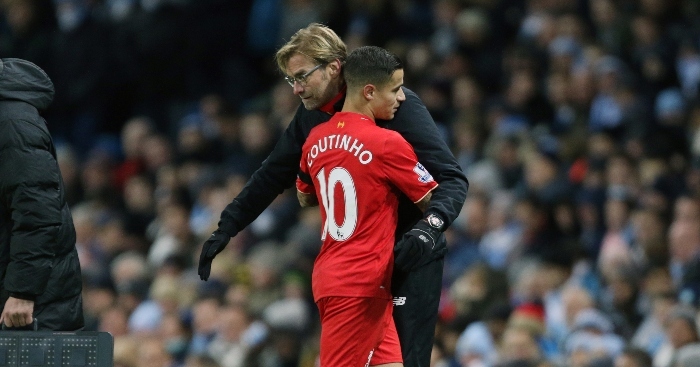 Jurgen Klopp’s success at Liverpool and Borussia Dortmund has often come despite having to sell top class players throughout his career.

The manager won two Bundesliga titles in Germany and is now on the brink of winning the Premier League title with Liverpool after becoming European champions in 2019.

We’ve compiled a talented Xl of players who were sold by Klopp.

Granted, this doesn’t get off to the best of starts.

Mignolet was a regular in the Liverpool team during Klopp’s first year at the club but lost his place to Loris Karius and then Alisson Becker.

The goalkeeper joined Club Brugge in 2019 and has kept 16 clean sheets in 27 Jupiler Pro League games, with his side declared Belgian champions after the remainder of the season was cancelled.

Rukavina only made eight appearances under Klopp at Borussia Dortmund before joining 1860 Munich on a permanent deal in 2009.

The right-back moved to Spain three years later and went on to make 131 La Liga appearances for Real Valladolid and Villarreal, winning over 50 caps for Serbia in the process.

Despite shining under Klopp in Liverpool’s run to the Europa League final, Sakho fell out of favour with the Reds boss after numerous disciplinary issues and was sold to Crystal Palace for £24million in 2017.

A stalwart for Bayer Leverkusen and Bayern Munich in his earlier career, Kovac joined Dortmund from Juventus in 2007, and he just edges out Martin Skrtel in this team.

He was sold to Dinamo Zagreb in January 2009 and won the league and cup double a few months later before hanging up his boots in 2010.

We’re scraping the barrel at left-back to such an extent that we’ve had to put in one of the Pet Shop Boys.

“Things change but Lucas is a special case,” Klopp told ESPN in 2017. “He asked for [to leave]. I would say he’s a friend. He’s a fantastic person.

“How I know and how he knows, he has a few issues when he’s not playing! But we always had a very respectful understanding.

After making just 12 Premier League starts in 2016-17, the Liverpool favourite decided to depart Merseyside for a fresh challenge at Serie A giants Lazio.

The 33-year-old was named Lazio’s Player of the Year in his first two seasons at the club and helped his side win the Coppa Italia in 2019.

Sahin was an integral part of Klopp’s successful Dortmund team and his impressive performances earned him a move to Real Madrid in 2011.

He struggled with injuries in Madrid and failed to establish himself in the team under Jose Mourinho, making just 10 appearances for the Spanish giants.

After an underwhelming loan spell at Liverpool, the midfielder returned to Dortmund and reunited with Klopp in 2013.

Gotze was tipped to be the next big thing after making his breakthrough under Klopp at Dortmund and won the prestigious Golden Boy award in 2011.

“I’m still in touch with Jurgen,” Gotze told DAZN in January 2020. “Of course, he taught me everything about professional football. At that time, I was just 17 and coming up from the youth team. He introduced me to everything. He let me play.”

Bayern Munich triggered his £31.5million release clause in 2013, making the midfielder the most expensive German player of all time.

Gotze may have failed to live up to his potential at the Allianz Arena – returning to Dortmund three years later – but he did score the winning goal in the 2014 World Cup final, which is enough to get him in this team ahead of Shinji Kagawa.

Perisic found his first-team opportunities limited at Dortmund and was sold to Wolfsburg in 2013 after criticising Klopp in public.

“I have no reason to be happy. I am playing even less than last season,” Perisic told Croatian TV station Nova-TV in 2012.

“I think Jurgen Klopp is the best manager in Germany but I do not feel supported by him. I am planning to talk to him.”

He subsequently shone for Wolfsburg and Inter before returning to Germany with Bayern Munich after breaking England’s hearts with Croatia in the 2018 World Cup semi-final.

Coutinho is by far the most expensive player Klopp has ever sold.

The Brazilian developed into one of the best players in the Premier League at Liverpool and Barcelona spent £142million on the midfielder in 2018.

He may have struggled to replace Andres Iniesta at the Camp Nou – who wouldn’t? – but f*ck he was good at Anfield.

Barrios scored 49 goals in 101 appearances under Klopp at Dortmund, including back-to-back 20+ goal seasons, before deciding to join Chinese Super League club Guangzhou Evergrande in 2012 having won two titles with the German outfit.

The striker has since had spells in Russia, France, Argentina and Chile and won the Copa Libertadores with Gremio in 2017.