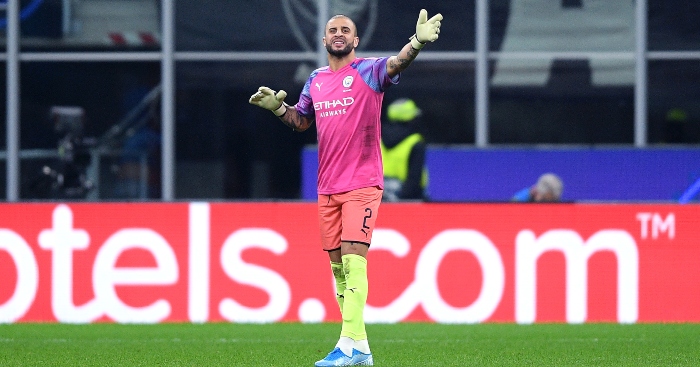 Gareth Southgate has seemed determined to play as many right-backs as possible for England in recent weeks, which has made us think whether the Three Lions could field an entire team of them.

In fairness, England boast an enviable depth in this position and are surely more stacked there than any other country in the world. Even a team of our finest right-backs could make a good fist of Euro qualification, at least judging by some of the groups they’ve been drawn in over the last few campaigns.

We present this line-up in a 4-3-3 formation. Apologies to Gareth, but there’s no room for Mason Mount.

An obvious choice, but sometimes the best choices are.

Walker has kept goal for Manchester City before, during a Champions League tie at Atalanta in the 2019-20 season.

We also think Walker fancies himself as something of a communicator and has Pep-endorsed footwork so can play out from the back. What could go wrong?

Gianluigi Buffon and Kyle Walker boast the best save success rate in the Champions League this season (100%) pic.twitter.com/r9Ecoi782U

Signed from Nottingham Forest this summer, Cash has made an impressive start to his career at Villa Park and we reckon the 23-year-old would provide defensive stability and thrusting forward runs in this team.

Wan-Bissaka may lack the height you’d expect from a centre-back, but has the tough tackling and positioning to compensate. He can be the English Cannavaro.

Let’s hope he’s not been taking too many notes from Harry Maguire recently.

We think a team that contained an overlapping centre-back would be the most revolutionary in international football since Marcelo Bielsa’s Chile side at the 2010 World Cup.

Baldock, well-versed in the system at Sheffield United, can be used to demonstrate how England have moved on from the days of 4-4-f*cking-2.

With a defensive toughness honed by spending time under Diego Simeone and a set-piece prowess demonstrated during the last World Cup, it seems natural to place Trippier in the same position he has recently played for his country anyway.

Southgate has taken a shine to Leeds United midfielder Kalvin Phillips in recent month, playing him alongside Declan Rice and Eric Dier in the footballing equivalent of triple locking your front door when you pop to the shops.

In this team, we reckon Phillips’ club team-mate Luke Ayling would more than suffice, given he was initially deployed in the position after leaving Arsenal to join Yeovil.

Possessing good work-rate, impressive hair power and capable of jaw-dropping volleys, Ayling would also make our team one of the coolest around too.

It’s long been mooted that Trent will end up in central midfield anyway, becoming England’s equivalent to Joshua Kimmich or Philipp Lahm.

He certainly possesses the attributes to play further forward and could develop his tactical awareness further under the watch of Jurgen Klopp.

Alexander-Arnold is yet to replicate his Liverpool form at right-back for England, so perhaps this isn’t the worst idea in the world (we’ve found our new tagline).

A youngster who’s been tipped by the more excitable sections of Chelsea’s fanbase as a ‘generational’ talent, James does look like a well-rounded player and has already shown his capabilities in central midfield during an impressive loan spell at Wigan Athletic.

We’re sacrificing his crossing ability here to utilise his other rounded attributes for the good of the team. 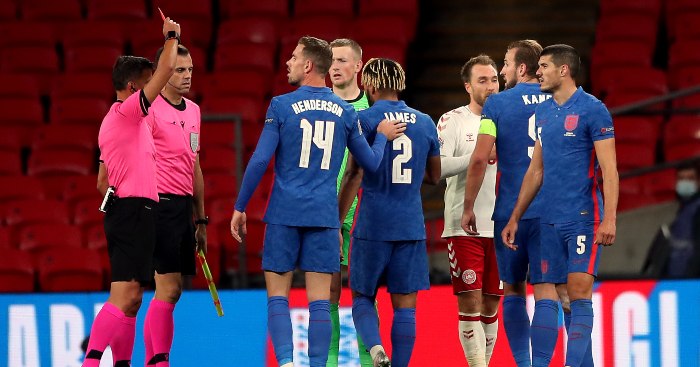 WATCH: Henderson tries to pull James away from ref before his red card

With a disarmingly boyish smile and the general air of a sixth form student, Lamptey has won many plaudits for his performances at Brighton this season.

Lamptey has pace to burn, which no defender likes playing against. Therefore, it makes sense to unleash him onto unsuspecting continental defences while he remains a relatively unknown quantity.

The Arsenal man is often switched to left-wing-back and has also played on the left of midfield for the Gunners, so he’d more than do a job here for this line-up.

Also, we’re keeping him here for his ability to dispatch the coolest penalties. 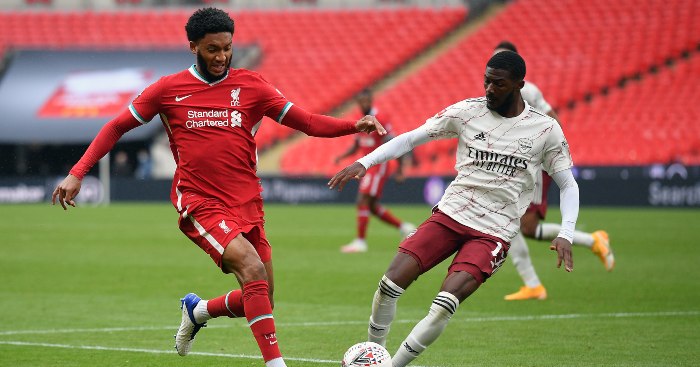 READ: Ainsley Maitland-Niles deserves to be Arsenal’s future for that penalty alone

It’s always important to have an element of surprise, so placing Ashley Young – who, like Maitland-Niles, has generally played everywhere at club level – as a false nine would surely flummox the most prepared of managers.

Yes, it’s a long while since Martin O’Neill compared Young to Lionel Messi while at Aston Villa, where his time occasional games as a second striker featured goals against Chelsea and Manchester United.

However, enough talent still resides to ensure the Inter man would do a serviceable job for this team.