An exceptional XI of players sold by Udinese since 2010: Alexis, Fernandes… 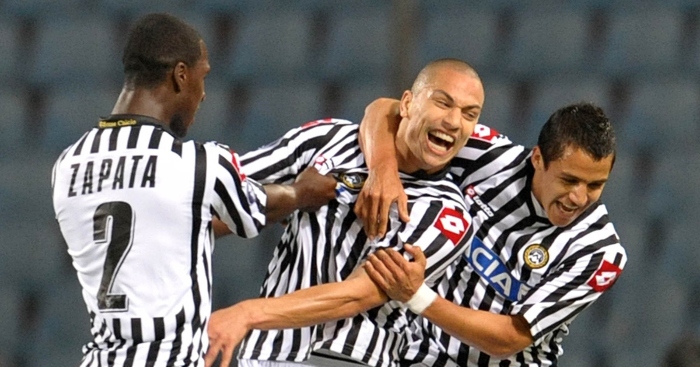 Every league has a couple of clubs with a reputation for bringing through excellent players before they reach the top, and in Italy that team is Udinese.

The Serie A club haven’t finished higher than third this century, and have never won the league in their history, but plenty of stars have passed through Friuli on their way to bigger and better things.

To get a feel for how impressive an array of players they have brought through, here’s an XI of ex-Udinese stars who have risen to the top. We’d even have room for a couple of subs, too.

Slovenia goalkeeper Handanović made Udine his first port of call after moving west from Domžale, racking up more than 200 games and establishing himself as one of the most sought-after stoppers in Serie A.

He moved to Inter in 2012 and has missed just nine league matches in the last seven seasons, taking his Serie A total past the 400 mark and justifying his spot with some fine saves.

Isla is another who joined one of Italy’s more traditional giants after impressing at Friuli, but the Chilean’s move to Juventus wasn’t quite as successful.

He was forced into a couple of loan moves away from Turin but has found his feet again after moving to Cagliari and then Fenerbahçe. That revival, coupled with a century of international caps, sees him edge out former Lazio right-back Dušan Basta for a spot in this XI.

Benatia joined Udinese back in 2010, at a time when Ian Holloway’s Blackpool were among the clubs linked with the centre-back, and it’s safe to say the Tangerines were left ruing their decision.

The Morocco international gave the club three good years before joining Roma for €13.5million, and he went on to play for European heavyweights Bayern Munich and Juventus. Now 32, he has started a new chapter with Al-Duhail, the Qatari club managed by former Chelsea and Manchester United coach Rui Faria

Colombian defender Zapata joined Udinese direct from Deportivo Cali in his homeland and played more than 150 league games under an array of managers including Serse Cosmi and Francesco Guidolin.

He spent several seasons in AC Milan’s defence, too, before jumping ship for Genoa over the summer and scoring his first goal for the club in a league win over Fiorentina.

A midfielder for much of his time in Udine, Asamoah has developed into a top left-back or left-wing-back throughout his Serie A career.

The Ghana international, who played for his country at the 2010 and 2014 World Cups, is now in his second Inter season after a lengthy spell with Juventus during which he won multiple Serie A titles.

It seems weird to think Cuadrado started only three games for Udinese but even weirder to think he was playing Serie A football nearly a decade ago.

After breaking through at Fiorentina, the Colombian saw his career stall at Chelsea. He has rebounded with Juventus, though, playing his 100th game this season and finishing off one of the all-time great Champions League counter-attacking goals along the way.

A mainstay of Napoli’s midfield, Allan is another who moved from South America to Udine before travelling to another part of Italy, and he gets the nod ahead of ex-Napoli man Gökhan Inler.

Brought over as a 21-year-old after fewer than 100 games for Vasco da Gama, Allan spent three seasons with the Friuliani before moving to Naples in 2015. Since the switch, he has earned international recognition for Brazil, making his debut shortly after the 2018 World Cup.

Fernandes was among the hottest properties in Europe in 2019, but that sort of profile has required him to kick on substantially since joining Udinese as an 18-year-old.

The Portuguese midfielder scored 11 times in black and white, across three seasons, but netted 31 times for Sporting CP last season alone to leave the likes of Tottenham and Manchester City circling.

Candreva is another whose best moments came away from Friuli, whether during several years out on loan in his early 20s or following a permanent move to Lazio in 2013.

Now at Inter, the winger has established himself at international level with more than 50 caps, including games at the 2014 World Cup and Euro 2016. Not bad for someone who played fewer than 10 games for Udinese.

A real success story at the club, Alexis burst onto the European scene with Udinese, scoring 20 goals from the wing in three Serie A seasons including four in a 7-0 win at Palermo in 2011.

Spells at Barcelona and Arsenal followed, but the Chilean’s years of top-level football have taken their toll – still only 30 years old, he has played more than 700 games for club and country – and he is trying to rediscover his old form after joining Inter on loan from Manchester United.

One man who hasn’t let the rules of ageing take their toll is Quagliarella, who enjoyed two double-figure seasons at Udinese more than a decade ago but somehow contrived to hit 26 Serie A goals for Sampdoria just last season.

The Italian striker, who turns 37 in January, keeps the likes of Luis Muriel and Asamoah Gyan out of this team thanks to his 200 career goals and continued ability to perform at the highest level.