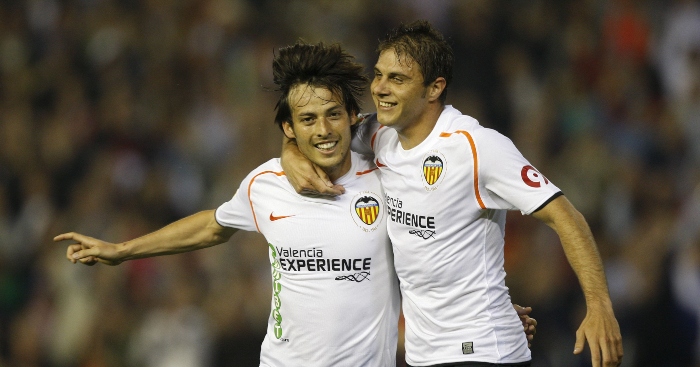 Valencia might be back among the Champions League elite, but they’ve had a tough journey to get there in the 2010s.

Los Che have had a significant player overhaul throughout the decade, losing some stars as they’ve been left behind by Real Madrid, Barcelona and even Atlético Madrid, and it’s got us wondering how things might look if they’d been able to keep hold of everyone.

We’ve put together an XI of players sold by the club since 2010, from those at the top of their game when they moved on to a few who really kicked on after leaving.

The Australia No.1 joined Valencia at the wrong time, playing a few games under Nuno only to see the former goalkeeper shunted to one side and replaced by Gary Neville in 2015.

Most of Ryan’s games came in cup competitions, including the infamous 7-0 defeat at Barcelona, but he’s had a much better time of it since leaving for Brighton and establishing himself as a near-undroppable presence for club and country.

It was at Valencia where Cancelo established himself as a top footballer and forced his way into the Portugal set-up, eventually moving on loan to Inter and then permanently to Juventus.

Now at Manchester City, the full-back has moved for combined transfer fees totalling more than €100m but has had to be patient in England. Now, though, with injuries across the club’s defence, he will hope to get an opportunity to establish himself.

After arriving from Sampdoria as a World Cup winner with Germany, Mustafi became part of a quietly impressive Valencia back-line

The man sold for £35million and the man who can no longer get into Arsenal defence don’t seem like they’re even the same person, and yet…

Another man who almost feels allergic to the Premier League, Otamendi at least had a reasonable start to life at Manchester City before Manuel Pellegrini left and he found himself even more exposed within Pep Guardiola’s style.

Still, more than 100 Premier League games and two titles (and counting) isn’t to be sniffed at, and his winner at Old Trafford in 2017 wasn’t unimportant.

If Valencia fans could pick three players from this list to stick around, Alba would surely be on the podium.

The left-back had broken through at the Mestalla after leaving Barcelona as a teenager but was coaxed back to Catalunya in 2012 and hasn’t looked back since, earning five league titles and a Champions League crown.

Nani joined Valencia at a weird time, having outstayed his welcome at Manchester United and bounced around Portugal and Turkey before eventually arriving in 2015.

The Portugal international spent just two seasons in Spain after arriving as a European champion but was farmed out on loan for the second of those and subsequently moved on, enjoying a third stint with Sporting Lisbon before running the show for Orlando City in MLS.

A perennial Premier League target, Banega stayed in Spain when he left Valencia, heading over to Sevilla for two years and returning after a season in Italy with Inter.

The Argentine midfielder was part of his country’s 2018 World Cup squad, contributing a hugely important assist for Lionel Messi during his country’s only victory of the competition.

The jewel in Valencia’s crown, Silva was highly thought of long before moving to Manchester City in 2010 and is the sort of player you can’t really replace.

Silva had already contributed to Spain’s Euro 2008 and 2010 World Cup triumphs but has got significantly better as a City player and will leave at the end of the season having established himself as one of the greatest ever Premier League imports.

Mata came through around the same time as Silva, having left Real Madrid without breaking into the first team, and when he signed a new deal in January 2011 it looked like he might be around for a very long time indeed.

However, just a few months later, he would join Chelsea and win successive European titles before joining Manchester United in a then-record move for the club. He’s now played more games for United than for Valencia, which seems weird.

Tonight will be a special night for Juan Mata…

The midfield maestro is always a joy to watch 🙌 pic.twitter.com/SuhhOtgnae

Joaquín gave Valencia five good years of service before leaving just before his 30th birthday in 2011. At the time, few would have expected the winger to still be playing eight years on, let alone still playing in La Liga.

After a Champions League stint with Málaga and a brief foray into Serie A, he returned to boyhood club Real Betis in 2015 and has averaged more than 30 games a season since coming back. Not bad for someone whose first stint with the club saw him play alongside the then world record signing Denílson, a man who last played in Europe in 2006.

We’d have loved to include Aritz Aduriz in this XI, with the veteran refusing to slow down even as he approaches the age of 40, while Paco Alcacer would undoubtedly be the man to lead the line now, but there’s no way we could ignore Villa.

Another star of the Joaquín-Mata-Silva era, El Guaje was also one of the stars of what some consider Barcelona’s best Champions League winning team in 2011. Even a few years outside Europe, playing in the US, Australia and Japan, hasn’t been enough to take the sheen off a great career.