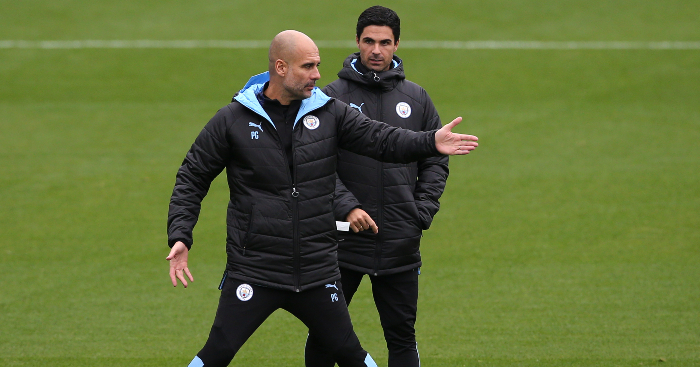 Arsenal are in talks with Manchester City over the potential appointment of Mikel Arteta as their new manager – and plenty of people believe he is right for the job.

When Arteta left Everton in 2011, Arsenal were in turmoil, losing 8-2 to Manchester United three days before he signed. But his leadership qualities and cultured performances helped turn their fortunes around, keeping them in the top four.

He goes down as one of the Gunners’ best signings of the 2010s – and now they will be hoping history can repeat itself but with the Spaniard in the dugout rather than on the pitch. Here’s what been said about Arteta the coach.

“He has all the qualities to do the job, yes and I think as well he is one of the favourites,” said the outgoing Gunners boss in 2018.

“He was a leader, and he has a good passion for the game and he knows the club well, he knows what is important at the club and he was captain of the club. Why not?

“He has been an assistant of Guardiola as well, so overall I think he has the qualities,

“I don’t want to influence that publicly because for me I believe it is important that they make their choice in an objective way and after once they make a decision I will support them.”

“I’m pretty sure, yes,” said Guardiola when asked if Arteta could succeed him as Man City boss, per The Times.

“He will have success, yes. But he decided to stay – thanks – but everyone decides what he’ll do in the future. Sooner or later it’s going to happen.

“He’s helped me a lot. From day one, so not just the last two seasons, from day one. He has an incredible work ethic, and he has a special talent to analyse what happens, and to find the solutions.

“He can tell me about the players we will face better than myself, because he played against them and was in the Premier League for ten or 11 years. That’s a long time.

“He’s so happy when we win but suffers when we don’t and that is why he tries to find a solution. He’s an incredible human being, with incredible values about what it means in the locker room to be together, and he is already an incredible manager and he’ll have incredible success in his future. We see the football in really quite a close way.”

Spanish journalist Perarnau has written two books on Guardiola and has unprecedented access. He revealed that Arteta is hugely influential behind the scenes and even has his fingerprints over specific moves and goals.

“Do you remember from Sunday’s game, after the second goal [against Arsenal], Pep’s hug with Mikel?” he told the 93:20 podcast at the time.

“That was because Mikel said to Mendy, ‘Don’t make a high cross when you get to the end line, make a cut-back along the floor,’ and after that Bernardo scored the goal.

“He [also] talked with Mendy and Sterling to try to make a double pass before the last cut-back.”

“People always ask me about training under Pep, but the things I’ve learnt from Mikel Arteta!” the winger is quoted as saying in Pep’s City: The Making of a Superteam.

“We get on brilliantly, he’s a lovely guy and a great coach. And he’s always right. He’ll watch me at training and then afterwards he’ll tell me what he thinks. He doesn’t just suggest something and leave me to get on with it.”

“I love him and he loves me,” said the former Spurs boss when Arteta was linked with joining his coaching staff in 2016. “You know our history from Paris Saint-Germain when he was 17 and I was the captain.”

“I am extremely fond of him and he’ll make an exceptional coach,” he added later in his book Brave New World.

The big f*cking German used to play alongside Arteta, and still at Arsenal as manager of the academy. He’d welcome a reunion.

“I was his vice-captain at Arsenal and he trusted me,” he recently told FourFourTwo.

“I was by his side during team meetings and we had a great bond. I’d love to work with him again, a top guy.”

The two midfielders were boyhood friends before they regularly played against one another in Merseyside.

“I follow him very closely, because we have kept in touch forever,” Alonso explained.

“When he moved from Everton to Arsenal, I wanted to know how it works there in Arsenal, and he’s enjoying it so far.”

“He is a very gifted footballer, he is a great lad to work with,” said Arteta’s former manager at Everton back in 2012.

“I think the manager (Wenger) was probably surprised what he offers. He is a great professional, a really good footballer and I’ll be delighted to see him back – just disappointed it is in an Arsenal jersey.

“I see Mikel now and when they are having a bit of a huddle he is the one who is the leader and I think they look to him, he has taken on a lot of the leadership qualities in that side.”

“Arteta is the one who worked closest with Fabian Delph and Oleksandr Zinchenko to mould them into emergency replacements for Benjamin Mendy,” wrote The Athletic’s Man City insider Sam Lee.

“Arteta did not want Delph to leave when he had an offer from Stoke City in the summer of 2017, and held one-on-one sessions with both men to teach them their new duties.

“In midfield, he has been working with Rodri to drill into him the Guardiola basics, such as body positioning, as well as teaching him when to press and when not to.”