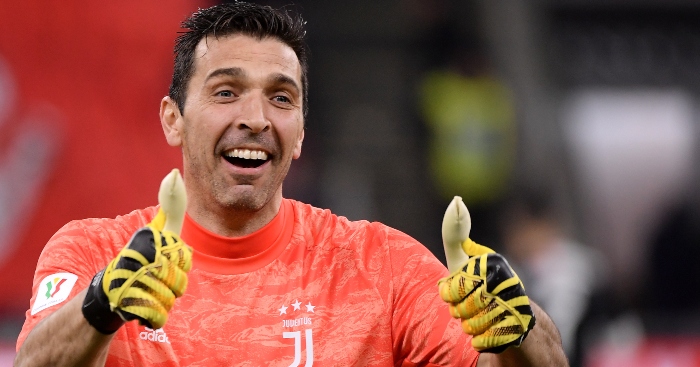 Some 25 years after his professional debut, Gigi Buffon is still playing, making his most recent Juventus appearance at the age of 42.

We know the Italy international has been around for ages, but it’s sometimes hard to put such a lengthy career into context.

This is why we decided to come up with an XI of great players who made their debut after Buffon’s 1995 bow and have already retired while Gigi continues to go strong.

Like Buffon, Cech was still a teenager when he made his professional debut, playing for Chmel Blsany in October 1999 at the age of just 17.

By that point, Buffon had already played more than 100 games for Parma, and the same month saw him make his 10th senior appearance for Italy.

It’s not as if Cech had a short career, either – he passed 900 games for club and country last season, hanging up his gloves after playing for Arsenal in the Europa League final.

A World Cup-winning captain, Lahm had a full decade as a first-choice at Bayern Munich after working his way up through the club’s ranks.

His 2017 retirement already seems like it happened a while ago, while even more years have passed since he quit international football in 2014.

Lahm’s debut, though? November 2002, when Buffon had already completed his €52million move to Juventus and played his first full season in Turin.

Another one-club man, Puyol racked up just shy of 700 Barcelona games and another 100 for Spain, winning just about every trophy going in the process.

He retired in 2014, meaning he wasn’t still around for the 2015 Champions League final against Buffon’s Juve, but he did play against the Italian in the Euro 2008 quarter-finals as Spain secured a penalty shoot-out victory en route to winning the competition.

We could just as easily have chosen John Terry for this centre-back spot. However, we’ve gone with Ferdinand as he’s older than his compatriot and can still slot his entire career inside Buffon’s.

The England international made his bow in the same season as Buffon, playing 20 minutes for West Ham against Sheffield Wednesday in May 1996.

He retired in 2015, though. Five years on, the Juve keeper is yet to follow suit.

Cole’s debut came four years almost to the day after Buffon’s, with Arsene Wenger giving the left-back a late run-out for Arsenal away to Middlesbrough in the 1999-2000 League Cup.

He would play his first Premier League minutes that season as well, returning from a loan spell at Crystal Palace to start at Newcastle in May 2000.

Cole ended his career with 809 senior appearances; Buffon passed that total in the 2013-14 season.

Riquelme almost feels like a relic of a different era, playing for Barcelona before Lionel Messi had made his debut for the club and beginning his career at a Boca Juniors side who still carried intercontinental clout.

The midfielder’s Boca bow came a year after Buffon’s Parma debut, and he finished with 22 appearances in his breakout 1996-97 season.

Ultimately, Riquelme managed to fit in two spells in Argentina, both lasting the best part of a decade, with five years in Spain in between. And he’s been out of the game for six full years.

There are some players who it’s hard to conceive of as ever having been young, but it turns out Xabi Alonso was once an 18-year-old playing first-team football for Real Sociedad.

The Spain international made his club debut for Real Sociedad against Logrones in December 1999, by which point Buffon was already a household name.

Nearly 18 years later, he called it a day with 114 international appearances to his name…more than 50 shy of Buffon’s tally.

Again, it could have easily been Lampard or Steven Gerrard here, but we’ve chosen the one who began his career earlier.

Lampard made his West Ham bow in the same game as his then-team-mate Ferdinand. Indeed, the pair came on in a double-change, replacing Tony Cottee and Keith Rowland.

Lampard’s career began with him sharing a pitch with Alvin Martin, and ended with him laying on a goal for Jack Harrison, 38 years Martin’s junior, yet he still fell well short of going the distance with Buffon.

Back when he was still known as Ronaldinho Gaucho, a teenage Brazilian talent made his Gremio debut in the 1998 Copa Libertadores, where he featured against eventual champions Vasco da Gama.

Seven clubs and 800+ appearances later, he called it quits at the age of 35.

What was Buffon doing at the time? Oh yes, he was captaining Juventus in the Champions League final and gearing up for five more years at the top.

Eto’o started young, playing for Leganes before his 17th birthday, and scored his first professional goals while on loan at the second-tier club from Real Madrid.

The striker ended his career with 882 senior games and 427 goals, including a handful in England with Chelsea and Everton.

Even he eventually called it a day, though, retiring at the end of the 2018-19 season after a few years at clubs with a less impressive standing than either Juve or Paris Saint-Germain.

Eto’s successor at Barcelona nearly a decade ago, Villa made his bow nearly a decade before then when he was handed his first Sporting Gijon minutes in the 2000-01 season.

Like Buffon, he was a fast starter, firing home 41 goals for the first team before his 22nd birthday, and ended his career with a whopping 440 goals for club and country at a rate of better than one in two.

He couldn’t keep pace with Buffon, though, playing his last Champions League game in 2014 and his last game of any variety in 2019.