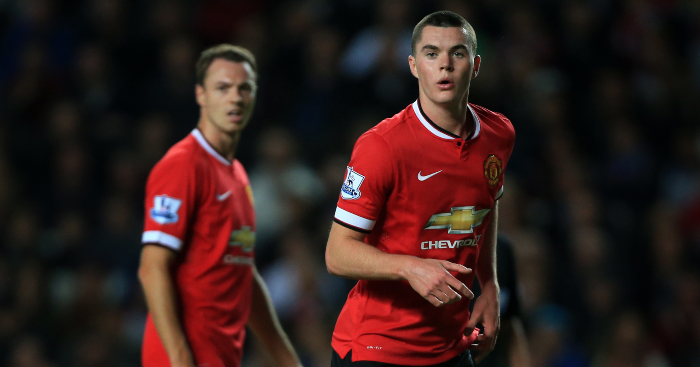 Manchester United are famed for giving players from their academy a chance in the first team – but not every youngster can make the grade at Old Trafford.

In December, United celebrated a run of 4,000 consecutive games in which a player from their academy was included in their matchday squad.

Were it not for an untimely injury, Heaton would have been in contention to be included in England’s squad for Euro 2020 after impressing for Aston Villa at the start of the season.

The goalkeeper won all three of his England caps to date while with Burnley, having enjoyed a nomadic career prior to moving to Turf Moor, featuring six separate loan spells during his time on the books with Manchester United.

Having been with Lyon since 2015, Rafael is now close to matching the number of appearances he made with United at the French outfit – but Old Trafford is never far from the Brazilian’s mind.

“I’ve always said that I wanted to work for Manchester United as a scout or something,” he told Stretty News in July 2019. “This could happen – I think I might start doing my coaching badges.”

Since leaving Manchester United on a permanent basis in the summer of 2015, Evans has been involved in two transfers worth a combined £11.5million.

In the same period, Kevin Wimmer has cost clubs roughly twice that amount. The transfer window is weird.

One of a couple of players on this list to have been linked with a return to United, Keane came close to rejoining the Red Devils in the summer of 2017 but opted to join Everton from Burnley instead.

“United] were in touch with my agent and showed a lot of interest,” Keane told The Times. “They wanted me, but a few things happened and I thought Everton would be the best place for me to come.

“I thought I would get a lot of game time here, more than I possibly would at Manchester United, and that was a massive factor in my decision.

“To be honest, having been at Burnley for three years, I wasn’t a fan of the club like I used to be. I wasn’t as big a fan of Man United as I had been, so I had to sort of put that to one side and just think rationally about what would be best for me as a footballer.”

Sure, Fabio would be a much more natural fit at left-back, but then we wouldn’t have been able to include this video, would we?

With just eight starts in La Liga for Real Sociedad this season, we’re starting to suspect Januzaj isn’t The Next Big Thing.

Danny Drinkwater and Paddy McNair were options in midfield, but Norwood’s stock has never been higher after finally establishing himself in the Premier League with Sheffield United.

Norwood was part of the Brighton and Fulham teams promotion to the top flight only to be let go before making his Premier League debut, but the Northern Ireland international has been a mainstay of Chris Wilder’s high-flying Blades this term, captaining the side in 21 of his 28 appearances to date.

“When I was leaving [Sir Alex Ferguson] told me, ‘You’re not going to make it for Manchester United but I do believe one day you’ll play in the Premier League,’” Norwood told The Guardian in August. “Whether he meant it or not I don’t know, but they were very kind words from a man of that stature.”

We much prefer the Cleverley playing at his level with Watford to the Cleverley that became the target of Manchester United supporters’ abuse towards the end of his time at Old Trafford.

“The hard part for me though was the year under [David] Moyes. The way the fans turned on you,” Cleverley told the BBC in January. “That was my club you know. I had been there since I was 11-years-old. For the fans to go as sour as they did.

“That disappointed me. I was a player who would try 100% a game. It wasn’t a fact of trying I just wasn’t good enough that year.”

“I was at United until I was 14, then I was released,” McNeil told The Guardian in December. “The club didn’t say anything to me, they just contacted my parents. Obviously I was disappointed and a bit hurt, because I had been chasing a dream and I wanted to prove I could be better than my dad, but Burnley stepped in to offer me a six-week trial and I’ve never looked back since.”

McNeil has been one of Burnley’s stand-out players over the past 12 months, catching the eye from the left wing and has even been linked with a return to Old Trafford.

It would have been a bit of a stretch to say Welbeck was ‘playing’ elsewhere earlier this season but, after recovering from yet another injury, the forward is now slowly picking up minutes while appearing off the bench in four of Watford’s last five games.

Had things gone differently in January, King may have rejoined Manchester United after their late move for the Bournemouth striker.

“I had some faith that it was going to happen,” King told TV2 in February. “And it was a bit sensitive for me considering that I moved over here as a 16-year-old to England to achieve my dream and wanted to reach that goal in Manchester United.

“It did not go [to plan] and then I made a choice and left. When you hear that you are connected to United and a bid comes in, then the feelings you had as a 16-year-old come back to you. But why it did not happen, I have not answered.

“I’m a Bournemouth player and I really enjoy it here. But it [would have] been a dream come true, I will not lie.”