Arsenal have one of the most impressive academies in the country and continue to produce exciting talents who go on to enjoy a good career in their game.

A lot of their young stars have gone on to have an impressive career at Emirates Stadium, but others have to look elsewhere for first-team opportunities.

We’ve compiled an XI of the best Arsenal academy graduates still playing elsewhere today, arranged in a 4-3-3 formation. Admittedly, the attack is a lot stronger than the defence.

Szczesny broke into the Arsenal team in 2009 but made a series of high-profile mistakes – most notably during the 2011 League Cup final against Birmingham.

The Poland international fell down the pecking order after Petr Cech was signed from Chelsea and spent two seasons on loan at Roma.

He then joined Juventus on a permanent deal in 2017, establishing himself as the club’s number one and winning back-to-back Serie A titles.

Hoyte joined Arsenal’s academy at the age of nine and went on to make four appearances for the first team, including a Premier League start against Manchester City.

After being released in 2012, the right-back has carved out a career in the lower leagues and is currently playing for Maidstone United in the National League South.

“From when I came back on loan (from Watford), I didn’t train with the first team as much, so from then I realised I’d had my chance. Before that I was training with them nearly every day,” Hoyte told us in 2019.

“When I went to Lincoln that was an eye-opener for me as I’d always played higher, I’d never really looked at the lower leagues, so I knew I needed to buck up my ideas here, otherwise I would end up with nothing. So there was where I realised I had to do my best.” 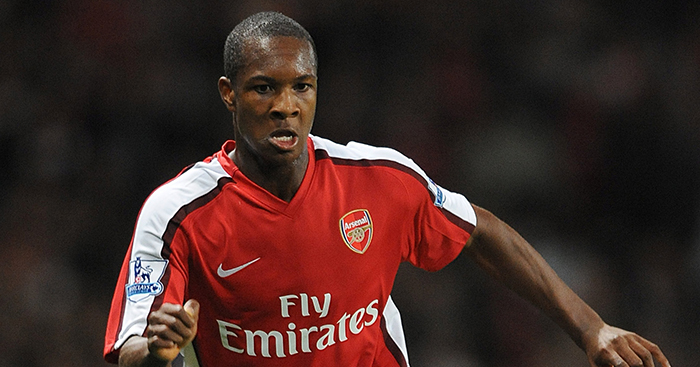 Djourou made 140 appearances for Arsenal after joining the club back in 2004 as a teenager but never looked like the answer to their defensive problems.

He completed a permanent move to Hamburg in 2014 and had spells with Antalyaspor and SPAL before signing for Sion in January 2020.

However, the defender has reportedly been released by the Swiss side after refusing to take a pay cut during the coronavirus outbreak.

Bartley helped the Gunners win the 2009 FA Youth Cup as captain, and made his one and only first-team appearance in a Champions League group stage defeat to Olympiakos later that year.

The centre-back signed for Swansea City in 2012 but joined West Brom six years later and has become a regular in their push for promotion back to the top flight.

Bartley isn’t the only Arsenal academy graduate to find himself at The Hawthorns.

Gibbs broke into the first team and eventually established himself as their first-choice left-back, making over 200 appearances for the Gunners and winning three FA Cups.

The arrival of Nacho Monreal relegated Gibbs to the bench, however, and the defender joined West Brom in search of regular first-team football, but he has struggled with injury problems in 2019-20.

An injury crisis saw Coquelin drafted into the first team in 2014 and the midfielder seized his chance, immediately establishing an unlikely partnership with Santi Cazorla in the centre of the park.

But he failed to hold down a place in the starting line-up and eventually left the club in January 2018, joining Valencia for £12million.

“I had great moments at Arsenal, and every decision is difficult, but I had no regrets,” Coquelin told The Independent in 2019. “Maybe I would if I hadn’t had the chances to play, but I got to show what I can do,”

“I had the opportunity to join another massive club and it was the right time to leave my comfort zone. I never doubted my qualities and I think I’ve been able to show that here.”

The Frenchman is flourishing in Spain and helped his side beat Barcelona in the 2019 Copa del Rey final.

Wilshere burst onto the scene as a teenager and seemed destined to become the future of Arsenal’s midfield.

However, his progress has been stalled by a series of injury problems and they’ve restricted him to just 14 Premier League appearances since joining West Ham in 2018.

Fabregas may have spent most of his youth career at Barcelona’s La Masia, but the Spaniard was still only 15 when he arrived in north London so we’re counting him.

He became an increasingly influential figure at Arsenal, making 303 appearances and scoring 57 goals in all competitions before returning to his boyhood club in 2011.

The midfielder made a controversial move to Chelsea three years later and now finds himself playing for Monaco in Ligue 1.

Gnabry is one of the few players on this list who have gone has gone from strength to strength since leaving Arsenal.

The winger found himself on the sidelines at Arsenal and was sold to Werder Bremen in 2016 after an unsuccessful loan spell at West Brom.

“[Arsenal] had so many wingers at the time – Alex Oxlade-Chamberlain, [Tomas] Rosicky, Theo [Walcott], [Santi] Cazorla, Alexis [Sanchez], Mesut Ozil – so I just had to go,” Gnabry told the Athletic in 2019.

His performances in Germany earned him a move to Bayern Munich and the 24-year-old has since developed into one of the most exciting forwards in Europe.

Malen joined the Gunners from Ajax’s academy in 2015 and boasted an impressive goalscoring record in the youth teams, scoring 27 goals in 67 games.

He was never given an opportunity in the first team at Arsenal and was sold to PSV in 2017, but he has made a real name for himself in his homeland.

The forward has scored 17 goals in all competitions for the Eredivisie outfit this season and has recently been linked with a move back to Arsenal.

Iwobi came through the ranks at Arsenal before scoring 15 goals in 149 games, but he never truly nailed down a starting berth at The Emirates.

The winger ended his 17-year affiliation with his boyhood club by joining Everton in 2019, where he has managed two goals in his first 22 appearances.