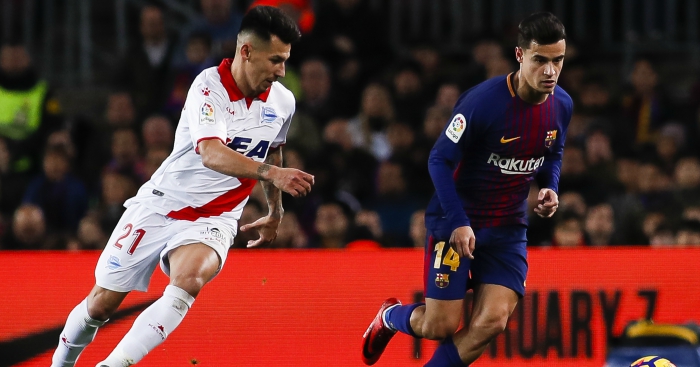 Philippe Coutinho finally made his first start for Barcelona on Sunday, having completed his big-money move from Liverpool earlier this month.

Coutinho made his debut for Barcelona last week as he appeared off the bench in the Copa Del Rey, and now he has his first La Liga minutes under his belt having played for just over an hour in the Catalans’ come-from-behind win over Alaves at Camp Nou.

The Brazil international operated mainly from the right of midfield, although he often drifted in field and over to the left flank. He may not have made any headline contributions, but a combination of Luis Suarez describing him as “very good” and the video of him falling over convinced us to do something very silly indeed and analyse every single touch he had on his full Barcelona debut.

Touches 1 & 2: Only 10 seconds into the game, Coutinho gets a settling touch. Alaves knock the ball long from kick-off, Semedo wins the header, Paulinho nudges it onto his compatriot and Coutinho takes a touch with his thigh before switching the ball to the left flank with a long, looping half volley.

Touches 3 & 4: It only takes 30 seconds for Barca to start recycling possession. Coutinho is hugging the right touchline keeping it simple with a touch and pass back to Semedo.

Touch 5: A scuffed clearance from Marc-Andre ter Stegen finds Coutinho. The midfielder’s flick inside is intercepted, but he makes sure he wins a free-kick in the process.

Touches 6 & 7: Barca move the ball upfield and Coutinho has the ball in space on the right flank. The No.14 is slightly isolated, however, and opts to keep things simple by passing back to Semedo rather than attack his opposing full-back.

Touches 8-15: Semedo and Coutinho are already starting to link up. The Portuguese has a little dart inside before playing the ball back wide to Coutinho, who has his first little dribble, displaying some quick feet but keeping his return pass simple. 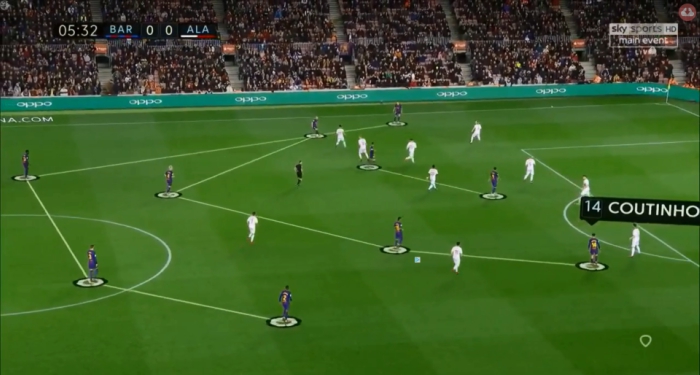 Touch 16: The former Liverpool man has drifted slightly inside, allowing Semedo to overlap. Rather than return the ball to the right-back, on this instance he plays the ball inside to Paulinho for the first time.

Touch 17: Coutinho continues his run through the middle and tries to get on the end of a pull back to the edge of the area from Semedo, which seems to be aimed more at Andres Iniesta. His touch lets him down, however, and Alaves can clear.

Touches 18-25: A tentative dribble inside looking to probe forward but, without any openings, he just plays the ball square for Rakitic.

Touches 26-28: Coutinho stays in the middle constantly moving and looking for the ball It’s slow coming, but then he makes two first-time passes, each one as he moves forward and closer to goal. A final, hopeful flick into the path of Suarez is deflected into the path of the goalkeeper.

Touches 29-31: Lionel Messi, who is never too far from Coutinho, gives the ball to his new team-mate, who in turn looks for his old and now new team-mate in Suarez. The pass is cut out, but Suarez is flagged offside anyway.

Touches 35-44: Messi is starting to hang out with Coutinho and Semedo increasingly more as the trio rotate possession between each other. Playing for Barcelona looks quite fun.

Touches 45-53: Once again Coutinho ghosts into the middle and has a tentative dribble with a little turn of pace.

Touches 54-57: A clever pass to Semedo, who overlaps into the opposition area for the first time, takes out two defenders.

Touches 58-61: Yet again he drifts inside to link up with Messi. You would, wouldn’t you?

Touches 62-66: Coutinho finds himself as Barca’s furthest man forward and with the chance to break, but without support his dribble comes to nothing.

Touches 67-68: The Brazil international has drifted to the left to play two-touch with Iniesta.

That first week at a new job.pic.twitter.com/yc8DadTdJs

Touches 71-75: He’s back on his feet, but his control in a tight space is awkward and an attempted nutmeg fails to come off.

Touches 76-78: Phil gets stuck in, making an interception.

Touch 79: Gets his foot in again to win back possession.

22 minutes: Alaves goal on the break – their second dangerous counter-attack of the match – as John Guidetti finishes one-on-one.

Touches 80-87: From the kick-off Coutinho dribbles down the right before getting involved once again in the middle.

Touches 88-92: Almost 10 minutes goes by without another touch for Coutinho, but he is quickly involved repeatedly, chipping the ball into Messi and providing a neat one-touch around the edge of the box.

Touches 93-99: Cutting in from the right flank, Coutinho tries to engineer room for a left-footed strike from the edge of the area but is crowded out and instead plays a delightful ball over the top which almost leads to a goal. The ball eventually reaches Coutinho once more 18 yards out, but his shot is deflected wide for a corner.

Touch 100: Coutinho’s corner comes to nothing.

Touches 101-110: The attacker is now looking to make things happen more, attempting to take on defenders rather than opt straight away for the simple pass.

Touches 111 & 112: Displaying some good strength, Coutinho bounces off one would-be challenger and chips a nice pass to Messi. These two already get along nicely.

Touches 113-124: Yet again, Coutinho collects the ball from the right, links up with Messi and drifts across the pitch to find himself in his favoured inside left position. The Brazilian seems to be enjoying the freedom, even if he is yet to find that final pass.

Touches 125-130: He may not be famed for his hold-up play, but he keeps the ball while three players surround him before finding a pass to a team-mate who now has open space.

Touches 131-136: The first flourish of a stepover, but Coutinho is facing his own goal and he has to keep things simple again.

Touches 137 & 138: Coutinho lets out a scream as a nasty challenge catches him on his ankle and a free-kick is awarded.

Touches 139-141: A Messi-like turn and dribble takes two defenders out of the game and draws yet another foul.

Touch 142: A decent corner on the stroke of half-time is headed clear. 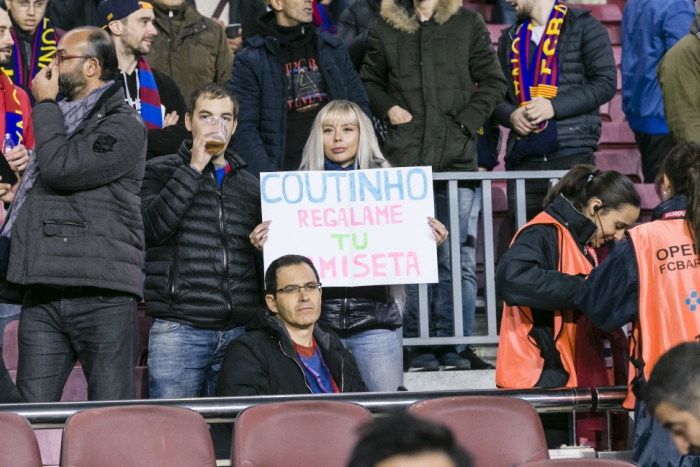 Touch 143: Coutinho’s first touch of the second half is a familiar pass back to Semedo before he drifts inside.

Touches 144-151: Semedo, Messi and Coutinho play their game off two-touch, followed by the latter switching play to Samuel Umtiti.

Touches 152 & 153: For the first time he properly links up with his former Liverpool team-mate Suarez, but his second pass is overhit, much to the dismay of the Uruguayan.

Touch 154: Semedo does well to keep the ball from going out for a throw and lays it off to Coutinho, who goes looking for a penalty. Not a chance.

Touches 155-158: Dropping back to help out his defence, Coutinho comes away with the ball and holds off a defender to help set Barca on the attack once again.

Touches 159-167: Coutinho now has Sergi Roberto as a right-back to link up with and they immediately trade passes.

Touches 168-170: Roberto flying down the right frees Coutinho to loiter in the middle, and he shows good physicality to hold off an Alaves player and bring down a ball in the air and keep possession.

Touches 171-181: The Brazilian may not be working in his most effective areas, but he still shows his class in snaking his way out of trouble in his own half and carrying the ball into the final third.

Touches 182-188: Finally getting the ball in space in the No.10 position, Coutinho drives forward, ignores obvious options to his right and plays an excellent pass to Jordi Alba on the left using the outside of his boot.

Touches 189-193: Coutinho appears to now be solely operating as a No.10 but this time loses the ball as he turns into trouble.

Touch 192: Trying to sniff out a goal in the penalty area, a neat touch almost creates a chance for Rakitic to score.

Touches 193-196: Not exactly the most explosive in nature, Coutinho is now operating almost as a box-to-box midfielder, coming deep to link the defence and attack.

65 mins: Coutinho is replaced by Paco Alcacer. Barca are still trailing 1-0, although that can be hardly attributed to the performance of the former Liverpool man.