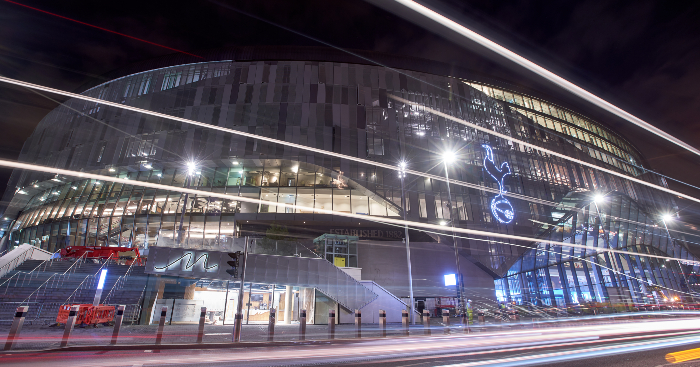 Tottenham are finally ready to start life in the new White Hart Lane, but how will the stadium move affect their ability to compete in the transfer market?

In 2018, Spurs became the first club not to sign a single player in the summer since the transfer window system was first introduced in 2003. And with the new stadium costing in the region of £850million to construct, there are concerns Mauricio Pochettino won’t exactly be flush with cash to spend over the next few years either.

Only four other Premier League clubs have moved stadium since the turn of the century. Here’s how they, and six big European names, competed in the transfer market after moving stadium.

Atletico had done remarkably well to upset the apple cart of Real Madrid and Barcelona’s duopoly to win the La Liga title in 2013 – and their move to the Wanda Metropolitano signalled a transition from scrappy overachievers into serious contenders, turning the big two into the big three in Spain.

After a £33.3million net spend the summer before, in 2017 Atletico spent just £32million on bringing in Vitolo, making a healthy profit as they recouped £56million on the likes of Theo Hernandez, Oliver Torres and Matías Kranevitter.

Serious spending soon came, though: Diego Costa returned home at a cost of £59million in the winter window, and they broke their record signing for a second time the following summer with a £63million spend on Monaco’s Thomas Lemar.

The Hammers didn’t exactly make the step forward expected when they saved a packet in moving to the Olympic Stadium in 2016.

Indeed, their net spend that summer was a relatively modest £45.5million as they brought in Andre Ayew and Manuel Lanzini from Al-Jazira, though that was a 44% increase on the year before.

With fans struggling in their new home and star man Dimitri Payet soon returning to Marseille, things would get worse before they got better.

They’ve turned a corner since, though, and gave new manager Manuel Pellegrini serious backing in 2018, spending £94million on the likes of Felipe Anderson, Issa Diop and Andriy Yarmolenko.

Lyon, traditionally a selling club built on good scouting, didn’t change tack after the move to Parc Olympique Lyonnais in 2016.

That summer, they spent just £11million combined on Emanuel Mammana from River Plate and Jean-Philippe Mateta, a punt from the lower leagues. That’s just half of what they made on Samuel Umtiti, who was sold to Barcelona for £22million.

Moussa Dembélé, signed from Celtic for £19.8million in 2018, is the only player they’ve signed for more than £10million since.

With a Basque-only signing policy, Athletic Club’s situation is somewhat unique, and ultimately quite healthy.

Being able to hold off and get big money (nearly £200million combined) for Kepa Arrizabalaga, Aymeric Laporte, Ander Herrera and Javi Martinez means they can reinvest that money to get the best eligible players around, for example signing Iñigo Martínez from Real Sociedad in 2018 for £28.8million.

When they moved to the new San Mames in 2013, with Ernesto Valverde succeeding Marcelo Bielsa as coach, they didn’t make any money from transfers as Fernando Llorente left for Juventus on a free. A combined £13.8million was spent on the likes of Mikel Rico, Kike Sola and Beñat.

Lille had recently been champions of France when they move to the Stade Pierre-Mauroy in 2012, finishing third the season before as Eden Hazard established himself as one of the brightest young talents in Europe.

That summer he was sold to Chelsea for £31.5million as Lille made a profit (£17million) during the summer window – though, in fairness, that was exactly what they tended to do every other year before the stadium move, too.

The Stadio delle Alpi, as an athletics stadium, was never particularly popular with Juventus fans – and they said goodbye in 2009, with the new Juventus Stadium rebuilt on the same ground and opened in 2011.

In their first season there, with new manager Antonio Conte in charge, they won their first league title since returning to the top flight after the Calciopoli scandal. They’re set to make it eight in a row this year.

They spent £83million in that first summer following the move on a total squad overhaul, while they also managed to get Andrea Pirlo in on a free transfer from Milan. They had a £69million net spend, up 305% on the previous summer window.

Arsenal are more of an exception rather than the rule in that their plush new stadium was also something of a millstone – ushering in a new era of austerity and failing to hold onto their best players.

However, like Spurs, Arsenal’s thriftiness started before the move itself.

In the summer of 2005, they balanced the books by letting Patrick Vieira go and bringing in Alexander Hleb, while a year later they spent just £4million net on transfers, with Tomas Rosicky the most expensive transfer at £9million from Borussia Dortmund. Ashley Cole left for Chelsea for just £6million (and William Gallas).

Months before the move, Arsenal had reached the Champions League final and were considered one of the best teams in Europe, but they haven’t managed to win a Premier League title since.

Spurs will be hoping the move goes better than it did for their north London rivals.

Moving into the stunning Allianz Arena a year before the 2006 World Cup, Bayern Munich were typically canny in the transfer market in the year of the switch.

They spent just £7.6million in the transfer window, entirely on Werder Bremen centre-back Valérien Ismaël as Torsten Frings moved in the other direction for £4.5million.

It was just a £1million net spend that year, but that mattered little when future legend Philipp Lahm returned from his Stuttgart loan.

Like West Ham, City massively benefitted by having an all-purpose stadium ready and waiting for them, with the costs to the club much smaller than they have been for Spurs. And having such infrastructure in place made the game-changing Sheikh Mansour buyout in 2008 possible.

To christen the new stadium, City played a friendly against Barcelona – featuring Puyol, Xavi, Iniesta and Ronaldinho – but it was a very different club back then, and such glamour games were a rare novelty. They brought in Trevor Sinclair and Claudio Reyna that first summer after the move, spending £11.5milion in total, with a net spend of around £6million.

That was down 80% on what they spent the summer before, the first back in the Premier League under Kevin Keegan, as considerable money was invested in Nicolas Anelka, Sylvain Distin and Matias Vuoso.

After leaving The Dell, Saints made a £5million profit in the summer of 2001, with Dean Richards and Luis Boa Morte shipped out and Rory Delap, Mark Draper and Anders Svensson coming in.

Without any serious investment in the following years, they were eventually relegated four years later.

Can you identify these football stadiums from photos of years gone by?

The best TripAdvisor review about every 2017-18 Premier League stadium