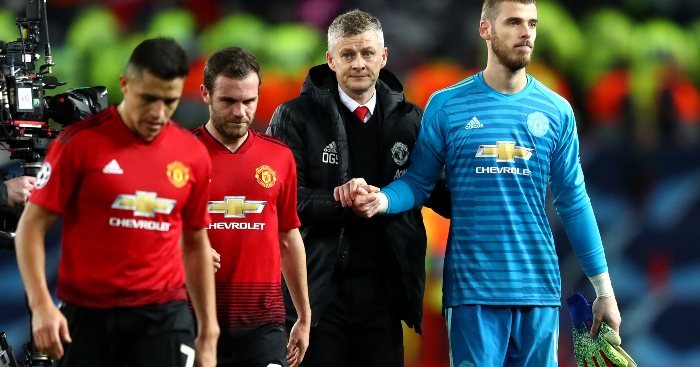 The 2-0 loss at home to PSG means that they’re almost certain to be eliminated from the Champions League, leaving the FA Cup as their only realistic chance of silverware this season.

With Tottenham, Liverpool and Arsenal already out, United would have a real opportunity if they can beat Maurizio Sarri’s Chelsea on Monday night.

But how will they respond to Tuesday’s defeat to PSG? Here’s what their recent record under Jose Mourinho was like after a European defeat:

This was thought to have been a dead rubber, but it turns out they missed a chance to top their Champions League group as Young Boys simultaneously recorded a shock win over Juventus.

Jose Mourinho made plenty of changes as he looked ahead to the weekend’s match against Liverpool, which they went on to lose 3-1 after two goals from substitute Xherdan Shaqiri. The result was the final nail in Mourinho’s coffin and following that, Solskjaer went on to win his first eight games.

After being outplayed on home soil to the Italian champions, Mourinho’s men rallied to win their next three fixtures 2-1, the first two in the league against Everton and Bournemouth, followed by an outstanding victory in the return match in Turin. It would be about as good as they’d muster under Mourinho this season.

The slump got back on track shortly after with a comprehensive 3-1 loss in the Manchester derby.

United’s limp exit from the Champions League, against a far from brilliant Sevilla, actually came in the midst of strong domestic form, arguably Mourinho’s best spell in charge of the Red Devils.

They had just come off the back of a 2-1 victory over high-flying Liverpool thanks to an early Rashford brace, and went on to win six of the following seven games after the defeat, including delaying City’s title celebrations by coming from two goals behind to win 3-2 at The Etihad and beating Tottenham 2-1 in the FA Cup semi-final.

The response to the defeat was good, but it couldn’t gloss over the abject nature of their Champions League elimination, which was arguably the nadir of Mourinho’s reign in charge.

After a good start to the season, their title ambitions had already faltered after defeats to Huddersfield and Chelsea. But nevertheless, they returned from a poor defeat in Switzerland by winning three league games in a row, beating Brighton, Watford and Arsenal by an aggregate score of 8-3.

They went on to comfortably qualify from the group in the end, too.

A defeat in Turkey left United’s hopes of qualification from their Europa League group hanging in the balance, though they ended up making it through, going on to lift the trophy.

After the Thursday night match, they won on the Sunday in South Wales, beating Swansea 3-1 at the Liberty Stadium thanks to a goal from Paul Pogba and a brace from Zlatan Ibrahimovic.

It was still early days for Mourinho and Pogba at Manchester United, but they had both received criticism after suffering a 2-1 defeat in the first derby against Guardiola’s City. No response came as a lacklustre display saw United lose 1-0 to Feyenoord, and things were to get worse the following weekend as they lost 3-1 to Watford at Vicarage Road.