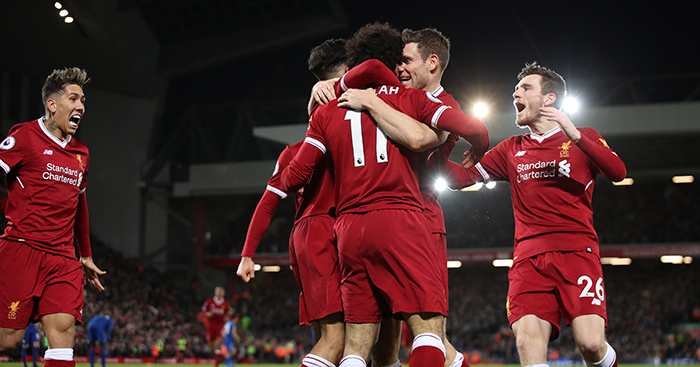 Liverpool are utilising counter attacks better than anyone else in the Premier League this season – and Mohamed Salah is playing a major role.

The Reds have already scored seven goals from what Opta define as ‘fast breaks’, the most in the Premier League and the same amount as Chelsea, who scored the most on their way to the title, managed in the entirety of last season. The season before, when Leicester City won the league, the Foxes recorded the most with six.

Remarkably, Salah alone has scored more goals from fast breaks, three, than all but four Premier League teams have managed in total.

The below graphic shows Liverpool’s average team positions from the recent 3-3 draw against Arsenal. The left image shows the first 15 minutes when Roberto Firmino (9) and Salah (11) were pushed high up the pitch, closing down and pressing the opposition.

Philippe Coutinho (10), Sadio Mané (19), Emre Can (23) and left-back Andy Robertson (26) are supporting the press, all having average positions in the oppositions half.

The second image shows how this changes between minutes 15 and 30; the entire team drops slightly deeper, with the back four in a more conventional shape and James Milner (7) just in front.

You can also see how the team becomes narrower, as they try to stay slightly deeper, ready to spring when the ball is won back.

It’s a subtle change, but by sitting off 5-10 yards more as a team, it invites the opposition to push out more and play, thus leaving them susceptible to the counter-attack.

The addition of Salah in the summer has clearly made a huge difference to Liverpool. Not only for his goals but his speed and danger on the counter-attack, which has added another dimension to the Reds’ attack. Last season, too much emphasis was placed on Sadio Mané.

Liverpool have used this game plan of pressing at the beginning of the game, before dropping deeper, to great success this season. They have scored most frequently between the 15th and 30th minute, netting 14 of their 50 goals in that period, proving their tactic of drawing the opposition out is working.

They’ve only scored once in the first 15 minutes of games. 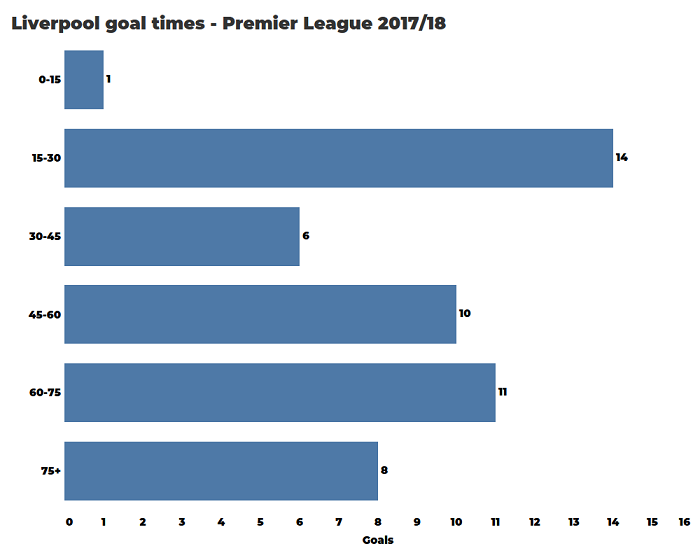 This tactic of starting the game at a high intensity can be extremely difficult to keep up throughout a season, but Jürgen Klopp clearly recognises this. He has learned lessons from his first two years in charge at Anfield.

The Reds have made 91 line-up changes so far this season in the Premier League, at an average of over four per game – significantly more than any other side. 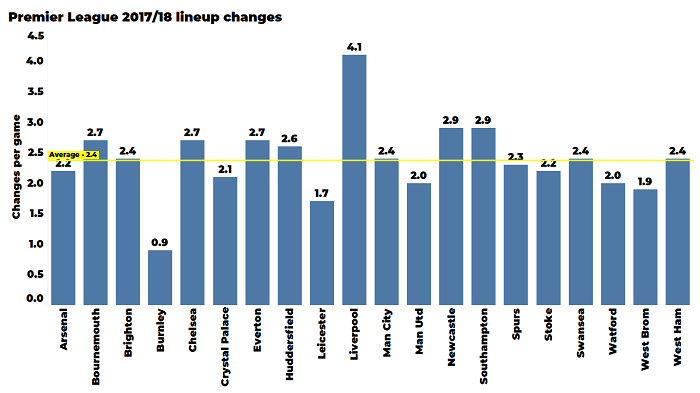 This season, game-time has been more evenly shared, with Salah being the only outfield player to feature in over 80% of Premier League minutes. 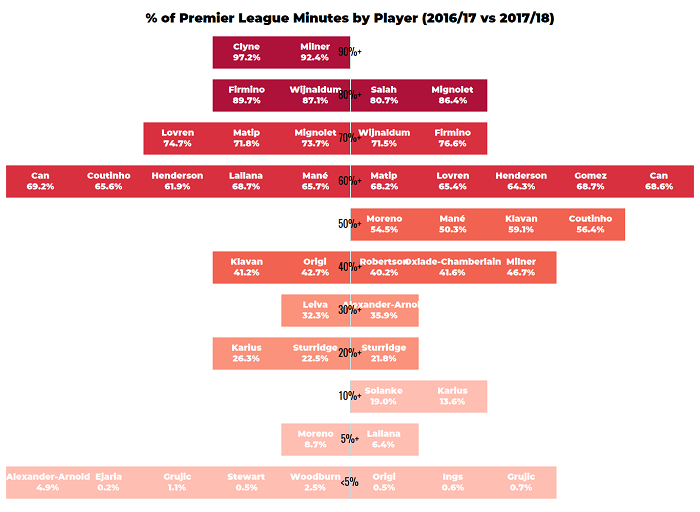 With the Reds landing a favourable draw against Porto in the last 16 of the Champions League, they will expect to be playing three games a week at the back end of the season.

This time, with the squad rotated more and the wonderful Salah to lead their counter-attacks, Klopp will hope his team can last the pace.