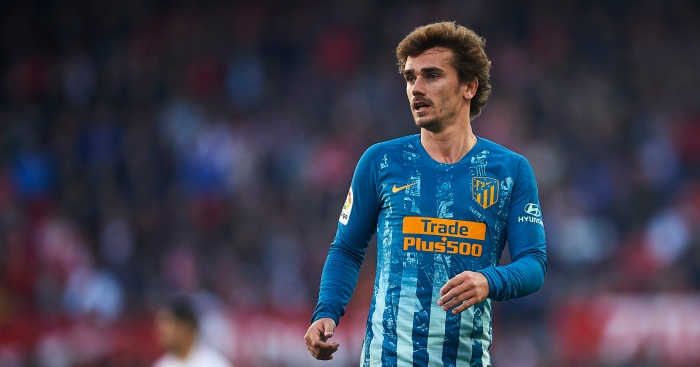 Despite all evidence to the contrary, both on and off the pitch, Atlético Madrid and Antoine Griezmann continually sense a real opportunity to challenge their wealthier rivals at the top of La Liga.

In another timeline, Griezmann might have found himself on the other side of the Madrid-Barcelona divide, having been strongly linked with a move to Barça before ultimately committing his future to the club from the capital.

Whatever you make of the Frenchman’s decision, one thing is for certain – had he opted to switch sides, he wouldn’t have had the opportunity to score free-kicks as good as the one he converted in a 1-1 draw against Sevilla.

This is not because he is a flawed set piece taker – far from it – but because you don’t just rock up and supersede Lionel Messi, however good you are.

The goal itself, though? It’s one of those where you have no problem sympathising with Tomáš Vaclík as he turns away in disgust, his face carrying the look of a man who has jumped out of the way of a passing car only to plant his feet firmly onto a dog turd.

There’s nothing he could have done to stop it, but that won’t make him any happier about the outcome. It’s almost preferable to screw up on your own terms, rather than be reminded whatever you do won’t be enough if Griezmann just feels like ruining your day.

The most frustrating thing for Sevilla, though, is that Griezmann has done this sort of thing against them before.

Vaclik might not have been playing when the Frenchman found the net from a similar distance in March 2017, but he and his team-mates will have seen footage of the goal, explaining the decision of Sergi Gómez and Aleix Vidal to desperately retreat in what was designed as an effort to intervene but ended up being little more than an act of rolling out the carpet for the ball to arc its way into the corner.

After all, the goal at the Calderón was the kind you can’t prevent by normal means, calling instead for more unconventional measures. They knew he is capable of floating the ball out of the reach of any goalkeeper, ergo the last-gasp effort to stop history repeating itself.

Unfortunately for Sevilla, it’s akin to snookering an opponent who’s switched out the cue ball for a marble. You can only stop him once you’ve realised you’re playing a different game, and even then it won’t be easy.

If you want to stop him, you just need to let him stop himself by attempting that extra layer of perfection, as we saw during France’s victory over Argentina at the 2018 World Cup.

Even in a tournament where he was identified as the danger-man for one of the favourites for the tournament, he found a couple of areas where he would remain near-untouchable.

In the opening minutes of the second round game, Griezmann stepped up with no doubt that he’d score and no doubt how he’d score, only to curl against the crossbar with Franco Armani beaten.

Armani knows better than to even flinch, as doing so would see him forfeit the battle of wills. He might know he stands no chance against a perfectly executed delivery, but the key is ensuring Griezmann doesn’t know he knows that.

Griezmann’s greatest gift is the gift of certainty in his actions, and he can only be taken down a notch by imparting a layer of doubt – or just inviting him to impart it on his own.

As we watch the likes of Messi and Ousmane Dembélé standing out at Barcelona, and Real Madrid floundering after Cristiano Ronaldo’s exit and a slow start under Julen Lopetegui, it’s easy for Griezmann to be stranded in the middle.

That doesn’t seem to bother the Frenchman all that much, however – it’s not that he’s determined to fly under the radar as much as he’s interested in thriving on his own terms.

Will we revisit the goals against Sevilla months or years down the line after he has produced the same sort of magic once more? It would take a brave man to bet against it.