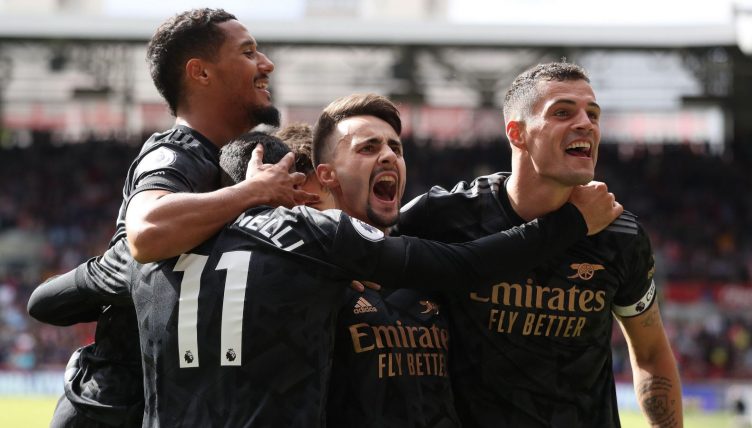 Arsenal have come on leaps and bounds over the past 12 months, and Sunday’s 3-0 win over Brentford at the Gtech Community Stadium – where they were beaten 2-0 in August 2021 – felt like a real mark of that progress.

Mikel Arteta’s young side may have just missed out on Champions League qualification last season, but they have started the 2022-23 campaign in hugely impressive form.

The 3-0 win over Brentford was their sixth victory in seven Premier League games so far and they sit top of the Premier League. If you like a bet on football, you can’t help but get behind the Gunners right now.

Speaking before this season’s trip to Brentford, Arteta told Sky Sports about the poor start to last season – Arsenal were bottom of the pile after three games – and how he and his team and coaching staff bounced back.

“I doubted myself, I questioned myself,” he said. “This is part of a journey where – if you want to get better – you have to be self-critical.

“You have to have other people around you to tell you the truth and also have the humbleness to always be willing to get better, improve and explore other opinions and ways to do your job…

“One of the big lessons was: stay calm in the difficult moments, understand why things happen and move on.”

They managed to do that and they built throughout last season and in the transfer window – adding the likes of Gabriel Jesus and Fabio Vieira, who both scored against Brentford.

Legendary Arsenal boss Arsene Wenger has even predicted that a sustained title challenge could be on the cards.

“I would say they are moving in the right direction,” Wenger said.

“I honestly think there is no weak position in the team… they are young, promising players and they have bought well this year.

“There is no completely dominating team this season and Arsenal has a chance with the potential that is there.

“We used to be in the top four and why not again? You cannot even rule out the fact that they can fight for the title and hopefully they can do it.”

The Brentford game was a significant test of that progress and one that Arsenal passed with flying colours.

When they travelled to west London on the opening day of last season, the Gunners were bullied into submission, losing 2-0 to goals from Sergi Canos and Christian Norgaard.

This term, Arsenal were very much the side doing the dominating. They ran the game from start to finish, with goals from William Saliba and Jesus giving them a 2-0 cushion at half-time and a scorcher from Vieira wrapping it up in the second.

Here, we’ve compiled 12 impressive stats that show how good Arsenal were against Brentford and how well they’ve played this season, courtesy of Squawka, Understat and WhoScored.

– Arsenal’s combined xG (expected goals) in their seven Premier League games so far is 14.17. Only Manchester City have recorded a higher combined xG so far.

– Arsenal’s xGA (expected goals against) is similarly impressive, with just 5.90 xGA in seven games. Only City and Brighton can better that. These underlying numbers suggest Arsenal’s good results are sustainable long term.

Nice kick about with the boys. ⚽️❤️🤍 @Arsenal

– Arsenal are playing the joint-fewest long balls per game (48) of all 20 teams in the Premier League this season. Wenger would be proud.

– Arsenal players are dribbling more than any others in the Premier League. They average 11.3 completed dribbles per game, the next best in that regard are Crystal Palace with 10.8. Jogo bonito.

– Perhaps unsurprisingly, given how much they dribble, Arsenal’s players are also fouled more times per game (12.3) than any other team’s players.

– Saliba’s headed goal from Bukayo Saka’s corner was Arsenal’s fifth from a set-piece this season, which is the joint-best in the league alongside Liverpool and Spurs.

– Remarkably, the Brentford game was the first time Saka has got two assists in a single Premier League game. Admittedly, Vieira did most of the work for the second of them, but they all count, eh?

– Last, but certainly not least, Arsenal brought on Ethan Nwaneri for his Premier League debut against Brentford. He is 15 years and 181 days old. He was born in 2007, after Dennis Bergkamp retired and after Arsenal moved away from Highbury. We have two observations: first, with the work being done at their academy, Arsenal’s future looks bright; second, we need a lie-down.