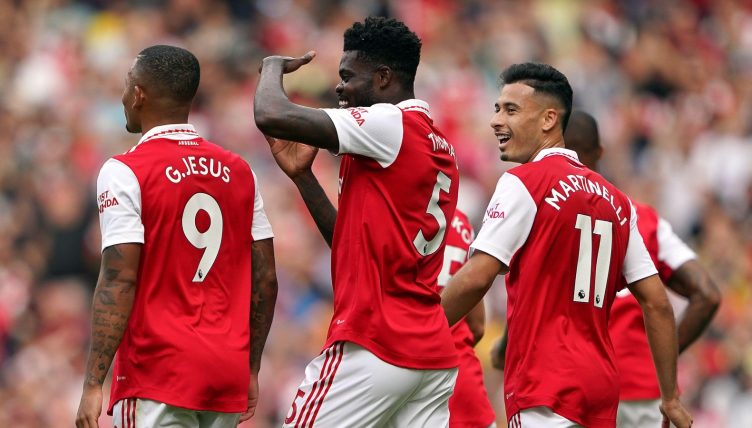 Arsenal extended their lead at the top of the Premier League with a dominant 3-1 win over Tottenham at a jubilant Emirates Stadium.

The first top-flight match after the international break required no added type; both Arsenal and Spurs had made impressive starts to the new season and victory in Saturday’s match would be a further statement of intent.

And it was Mikel Arteta’s Gunners that took the game to their opponents, taking the lead through a sensational strike from Thomas Partey. Spurs drew level soon afterwards, Harry Kane converting a penalty following Gabriel’s foul on Richarlison and the first-half ended level.

But the second-half was a disaster for Antonio Conte and Tottenham. Hugo Lloris was at fault for Arsenal’s second goal and the clinching third from Granit Xhaka came shortly after Emerson Royal’s sending-off.

Arteta would have been delighted with his side’s performance and a result that leaves Arsenal four points clear at the Premier League summit. Here’s 12 jaw-dropping stats that underlined Arsenal’s supreme display.

– This was already a landmark occasion before kick-off; it was the first Premier League north London derby with either side top of the table since December 2007, a 2-1 victory for Arsenal at the Emirates thanks to Nicklas Bendtner’s winner.

– Thomas Partey opened the scoring with a first-half thunderbolt. It was his 57th attempt from outside the box since joining the Gunners two years ago and his first goal. He was clearly saving himself for the big occasion.

What a way to open the scoring!! 😲

Thomas Partey makes it 1-0 to Arsenal with a gorgeous finish after 20 minutes!😎 pic.twitter.com/d07hkTU6hh

– Despite going into the interval level, Gabriel Martinelli caught the eye with his first-half performance. The young forward completed three of his four dribbles, won four ground duels and enjoyed a 100% pass accuracy.

– Gabriel Jesus gave Arsenal the lead for a second time after capitalising on a mistake from Hugo Lloris, becoming the first Brazilian to score in the north London derby since Julio Baptista in January 2007 in the process.

– And Jesus has still not tasted defeat in a Premier League match in which he’s scored; the Brazil international arrived in England in January 2017 and has scored in 51 separate games. Crikey.

– Granit Xhaka has scored as many Premier League goals in eight games in 2022-23 as he managed in the previous two seasons combined (2).

– Xhaka continued his excellent start to the season with a Man of the Match performance. The Switzerland international won 100% of his aerial duels, made six ball recoveries, completed all three of his long balls and made a key pass. Arsenal would be a shell without him.

– William Saliba was another impressive performer. The centre-back enjoyed a 96% pass accuracy, recovered the ball 11 times and won all three of his attempted tackles in a complete shackling of Harry Kane.

– Mikel Arteta’s Arsenal are the first team to beat Antonio Conte’s Spurs in the Premier League this season, stretching their lead over their north London rivals to four points.

– Arsenal have still not lost a Premier League home match against Spurs since November 2010.