The last 3 times Arsenal spent over £100million & what happened next 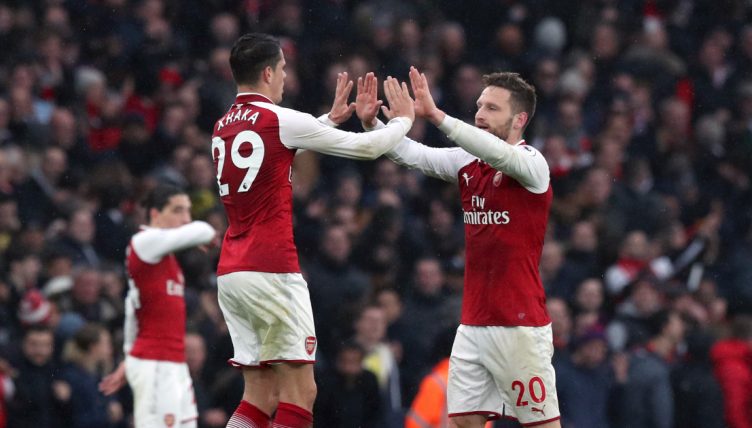 While Arsenal don’t have incredibly deep pockets like Manchester City and PSG, they still like to splash the cash every now and again.

Using data from transfermarkt, we’ve taken a look at the last three times Arsenal spent over £100million in a summer window.

Arsenal finished second in the Premier League in the 2015-16 season, their best league placing since the 2004-05 campaign.

But they couldn’t afford to rest on their laurels as Chelsea, Manchester City and Manchester United all appointed new managers.

Arsene Wenger was given a £100million budget in the summer of 2016 and most of that was spent on Granit Xhaka and Shkodran Mustafi.

After failing to sign Jamie Vardy from Leicester City, the Gunners then paid £18million to sign Lucas Perez from Deportivo La Coruna.

“It’s a very exciting season, there are so many ambitions out there,” Wenger told Sky Sports News in August 2016. “It’s a little bit of a world championship of managers.

“Let’s not be naive, the economical power of the Premier League attracts the best players and the best managers. If you want quality people, you have to pay the amount of money.”

Despite losing to Liverpool on the opening weekend, Arsenal started the season brightly and were top of the Premier League after 15 games. They also finished above Paris Saint-Germain to top their Champions League group.

But Arsenal’s form nosedived in the second half of the season and they lost six of their final 16 Premier League games in 2016-17.

The Gunners finished outside the top four of the Premier League for the first time since the 1995-96 season and fans staged protests calling for Wenger to leave the club.

While they suffered a humiliating 10-2 aggregate defeat against Bayern Munich in the Champions League last-16, Arsenal did at least end the season on a high note by beating Chelsea in the FA Cup final.

The start of the post-Wenger era saw Arsenal finish fifth in the Premier League and lose against Chelsea in the Europa League final in 2018-19.

But the Arsenal board kept faith in manager Unai Emery, giving him £137.5million to spend on new signings in the summer of 2019.

The Gunners completed a club-record £72million deal to sign Nicolas Pepe, who had just enjoyed an outstanding season at Lille.

Arsenal also tried to plan for the future, signing a couple of talented teenagers in William Saliba and Gabriel Martinelli.

Emery then looked to bolster their defence, bringing in Kieran Tierney from Celtic and David Luiz from Chelsea on transfer deadline day.

Arsenal still started the 2019-20 season in terrible form, winning just four of their opening 13 Premier League games and finding themselves eighth in the table at the end of November.

There were also problems off the pitch and Granit Xhaka was stripped of the Arsenal captaincy after telling Arsenal fans to do one.

After Emery was sacked, Freddie Ljungberg briefly took over as caretaker manager until Mikel Arteta was named as their permanent boss in December 2020.

But Arteta wasn’t able to rectify their Premier League form straight away and they still came eighth, their lowest top-flight finish since the 1994-95 season.

Despite finishing top of their Europa League group, the Gunners suffered a shock exit in the round of 32 after Olympiacos beat them on away goals.

The FA Cup once again provided respite during a difficult season as Arsenal beat Chelsea in the final to lift the trophy for a record 14th time.

🥶 This finish 🥶#OnThisDay Pierre-Emerick Aubameyang joined @Arsenal, going on to win an #EmiratesFACup with a brace in the Final 🙌 pic.twitter.com/FzFURtQLyb

The start of Arteta’s tenure at Arsenal was dominated by the Covid-19 pandemic, which had a huge impact on football finances.

But Arsenal recovered well and were the biggest spenders in all of Europe in the summer of 2021 as they forked out £149.04million on six new faces. It was also the club’s largest ever outlay on players in a single transfer window.

Arteta desperately wanted a new goalkeeper and centre-back so they spent a combined £77.85million on Ben White and Aaron Ramsdale.

After spending the second half of the 2020-21 season on loan at Arsenal, Martin Odegaard then made the move permanent in a £31.5million deal.

Albert Sambi Lokonga came through the Anderlecht academy and his performances in Belgium earned him a £15.75million move to north London.

The Arsenal boss also brought in Nuno Tavares and Takehiro Tomiyasu, who were both relatively unknown figures before they arrived at the Emirates.

“Now we have the tools that we believe are going to give us the best opportunity to compete in the way we want to compete and now we have to make it work,” Arteta said after the six deals were complete.

“We are getting judged with every result and we don’t want to use any excuse but with what has happened since the start of the season I’m looking at that with a bit of perspective. You want to build a medium to long-term project with immediate results and we have to embrace that.”

But they had the worst possible start to 2021-22, failing to score or earn a point in their opening three Premier League matches.

Arsenal’s board still kept faith in Arteta and they turned things around, producing some impressive performances as they moved up the table.

They looked set to secure Champions League qualification but collapsed in the run-in and were pipped to fourth spot by Tottenham.

Unlike 2016-17 and 2019-20, Arsenal weren’t able to pick up any silverware as they lost to Liverpool in the EFL Cup semi-final and were knocked out of the FA Cup by Nottingham Forest.