Every VAR decision that has been awarded against Arsenal this season 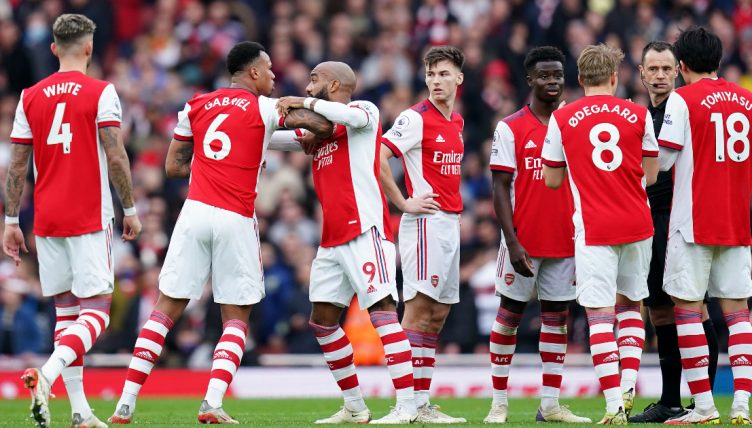 Nearly three years after its introduction to the Premier League, VAR remains pretty unpopular with fans, players and pundits. Arsenal fans, in particular, have questioned the effectiveness of its implementation.

While some believe that the technology itself is fine, and that the referees using them are to blame, many have pointed out that despite the presence of VAR, controversial decisions are still seen in most games.

Arsenal have felt that they have been on the receiving end of a number of debatable refereeing decisions this season, to the extent that manager Mikel Arteta hit out at PGMOL, the refereeing governing body.

“You ask me if I am happy with the decisions that we have had this season – I am not at all,” Arteta stated after Gabriel Martinelli was sent off against Wolves.

We’ve listed the four decisions that VAR awarded against the Gunners this season. This is limited to the decisions which were awarded, so does not include any controversial moments which were missed.

Arsenal were dominant in their 1-0 win over Watford in November, but they could and should have scored more.

The Emirates crowd were jubilant when they thought Bukayo Saka had put them ahead in the seventh minute, only for VAR to subsequently disallow the goal for offside.

Saka had finished off after Ben Foster rushed out to try and steal the ball from Alexandre Lacazette, and many were baffled that Saka could be considered offside when there was a defender between him and the goal.

However, when Pierre-Emerick Aubameyang touched the ball onto Saka, the 20-year-old was beyond Foster, and therefore offside, despite Nicolas Nkoulou’s attempts to clear the ball off the line.

This was the correct decision but Emile Smith Rowe would go on to grab the winner, meaning this one was forgotten very quickly.

When Arsenal travelled to Old Trafford in December to face Michael Carrick’s Manchester United, they were considered the favourites based upon the form of both teams.

On a chaotic Thursday night, Smith Rowe’s controversial opener had been cancelled out by Bruno Fernandes and Cristiano Ronaldo but the Gunners were back in it after Martin Odegaard equalised midway through the second half.

But Odegaard went from hero to villain in a matter of minutes, as he gave away a penalty by bringing down Fred in the box.

Referee Martin Atkinson waved away the initial appeals, but VAR had a look and decided that Odegaard had committed a clumsy foul.

Going in for a challenge from behind, and failing to make any contact with the ball meant that the decision to award a penalty was justifiable and Ronaldo converted from the spot.

The penalty proved to be a winner as Arsenal could not find a reply, and ended with a gutting defeat.

“The VAR checked it and hopefully it was the right decision,” the Arsenal manager said after the game when asked about the penalty.

Manchester City’s trip to the Emirates on New Year’s Day was filled with drama and controversy.

Arsenal were 1-0 up and dominant against the champions, but a number of contentious refereeing decisions had the Emirates crowd seething.

Odegaard was denied a penalty in the first half after a challenge from Ederson, and this set the mood for the rest of the game.

Early in the second half, Bernardo Silva went down fairly easily in the box but after a VAR review, a penalty was given for a foul from Granit Xhaka.

Xhaka is no stranger to a clumsy challenge, but he did have a right to be aggrieved at the decision as Silva was already falling to the ground before contact was made.

Some have argued that the penalty was awarded because Xhaka was holding onto Silva’s shirt but it still looked to be a very harsh decision.

Riyad Mahrez converted the penalty and referee Stuart Atwell would go on to send off Gabriel Magalhaes before the visitors scored a 93rd-minute winner in a horrible day for Arsenal.

Arsenal assistant Albert Stuivenberg, standing in for Mikel Arteta who was absent with illness, bemoaned the VAR inconsistency after the game.

“The moment with Odegaard, I think it is a clear penalty but at least a moment for the referee to check (on the monitor), it happened in the second-half with their penalty which is not really consistent and then of course the sending off was an important moment after that,” he said.

Tensions were flaring throughout the 90 minutes, and this certainly didn’t help anyone calm down.

Penalty given. Penalty scored to make it 1-1. pic.twitter.com/7dyG4pRR8D

Arsenal looked set for a routine 2-0 victory and another clean sheet against Brentford in February but a late goal from Brentford gave the Gunners a scare at the Emirates.

Saman Ghoddos whipped in a free-kick as the game was drawing to a close and a series of ricochets and comical defending allowed Christian Norgaard to slam home from inside the box.

The Arsenal fans were relieved when the offside flag went up immediately, but this was short-lived as a VAR check showed that Cedric Soares was playing Norgaard onside and the goal stood.

The full-time whistle blew shortly after, meaning Arsenal secured all three points regardless thanks to earlier goals from Smith Rowe and Saka, but they will have been frustrated at throwing away a clean sheet so late in the game.